Collectors world-wide have been anticipating the release of the U.S. Mint’s 2017 $100 1 oz. High Relief Proof Gold American Liberty coin. A viral release for many reasons, this coin has generated an impressive amount of interest including national coverage from almost every major news network.

For only the second time in history, the U.S. Mint will issue a $100 Gold Coin. More notably, for the first time, Lady Liberty will be depicted as an African-American woman. The Mint’s flagship 225th anniversary product, this release is expected to be a numismatic event of epic proportions..

See MCM's selection of the 2017-W American Liberty gold coin for the next addition to your growing collection.

There are no available products under this category. Check back soon!

Celebrate the 225th Anniversary of the U.S. Mint

In 1792, Congress recognized a need for a firm monetary system. On April 2, 1792, The Coinage Act was passed which allowed the construction of the first federal building to be required per the constitution. After months of hard work, the first U.S. Mint was built in the nation’s capital, which was at that time in Philadelphia.

Since then, the U.S. Mint has expanded to a number of other facilities and currently produces millions of coins each year. The U.S. Mint is renowned around the world for their quality, causing classic U.S. coins to be some of the most collected coins ever struck. Because they have firmly held onto their standard of excellence throughout the years, every bit of expertise, skill, and technology was placed into the production of this stunning 225th-anniversary American Liberty Gold Coin.

"We are very proud of the fact that the United States Mint is rooted in the Constitution. Our founding fathers realized the critical need for our fledgling nation to have a respected monetary system, and over the last 225 years, the Mint has never failed in its mission."

While the 2017 225th Anniversary Gold American Liberty Coin commemorates this history of the U.S. Mint and its commitment to excellence, it also serves as a reminder of the cultural and ethnic diversity present throughout the U.S. This coin is the first in a series of 24-karat gold coins bearing allegorical representations of Liberty that represent the many different peoples of our great country.

"As we as a nation continue to evolve, so does liberty's representation "We live in a nation that affords us the opportunity to dream big and try to accomplish the seemingly impossible."

This standard was known by designers in the U.S. Mint’s Artist Infusion Program (AIP), a group of professional American artists from diverse backgrounds, and many stunning and unique obverse and reverse designs were submitted. The obverse was chosen by the U.S. Treasury Secretary, where it was officially made known to the numismatic community. It wasn't until the official unveiling, however, that the U.S. Mint revealed which design had been chosen for the coin's reverse.

The chosen obverse design depicts Liberty with the features of an African-American woman, wearing a crown of stars similar to what is worn by Liberty in the Statue of Freedom. This historic design was created by AIP designer Justin Kunz and sculpted by U.S. Mint Sculptor-Engraver Phebe Hemphill. From the beauty of their creation, there is little doubt this coin will serve as an excellent and popular first issue to the series.

The chosen reverse design was recommended by both the CCAC and CFA. It depicts an eagle in flight, with wings in the middle of a powerful flap, talons extended aerodynamically behind itself. This stunning new design was created by AIP designer Chris T. Costello, and it was engraved by U.S. Mint Sculptor-Engraver Michael Gaudioso. 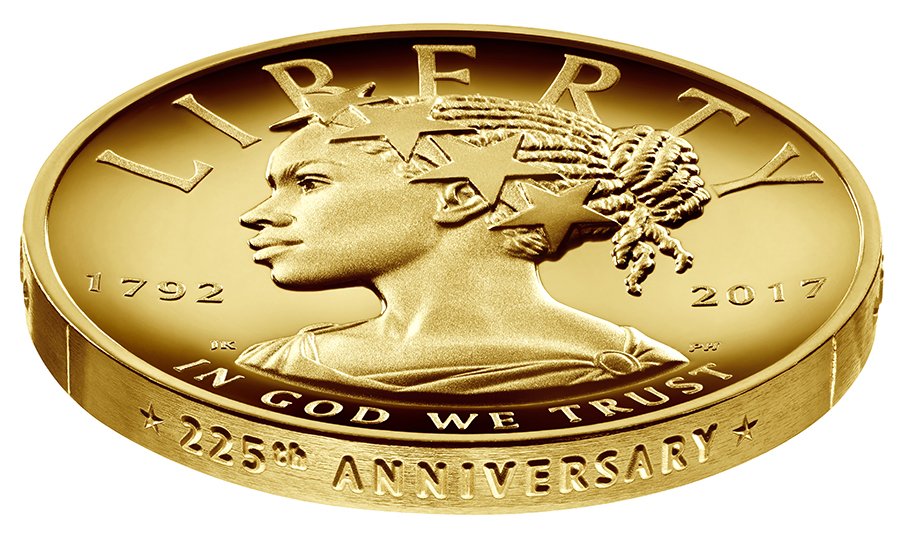 Coins feature edge-lettering saying, “225th ANNIVERSARY” which, in a technological feat superior to any other edge-lettering used by the Mint, is raised, jutting out from the smooth edge of the coin. A total of 13 stars for the 13 original colonies are also present on this coin's "third design."

This stunning commemorative coin is struck from 1 Troy oz. of .9999 fine (24-karat) gold in detailed high relief. Like the 2015 American Liberty Gold Coin, it is legal tender for $100. Unlike the 2015 coin, it will sport a new "enhanced" proof finish with a mirrored field and devices with various levels of laser frosting. According to the U.S. Mint, this laser etched finish ia heavy in some areas, such as the inscriptions on the obverse, and light in other areas, like the eagle reverse effigy. This would make the 2017 Gold American Liberty not only the first high relief proof coin, but also the first enhanced proof coin.

The  U.S. Mint has also announced that a 1 oz. .999 Silver American Liberty Medal would also be released, sharing the same design as this 2017 gold coin. It is unknown if this medal will be struck in high relief, or if it will be a standard relief version, like the recent 2016 American Liberty Silver Medal. MCM will be carrying this additional release once it is issued by the U.S. Mint, so keep an eye out for when you can sign up for a presale notification.

The U.S. Mint is currently entertaining the idea of creating a four-piece American Liberty Silver Medal Set that would be released late 2017. If issued, each medal within the set would have a different finish and would be struck at a different facility. Collectors might find it interesting that this new set would double the amount of American Liberty 1 oz. silver medals issued in 2016.