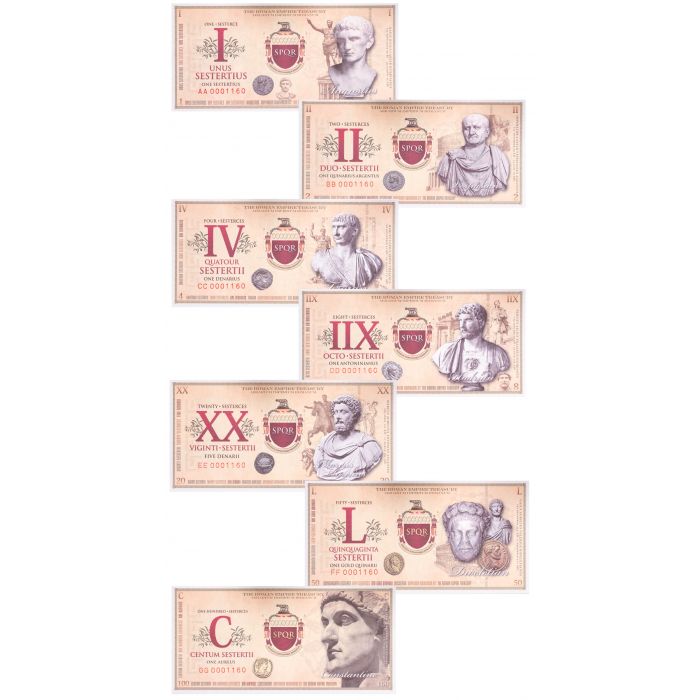 Skip to the beginning of the images gallery
Add fantasy banknotes of the Roman Emperors to your collection!

Why add this (2007) Rome Set of 7 Fantasy Roman Banknotes to your collection?

The Roman Empire was known for quite a number of things, many of them positive, but paper money isn't on the list. This set was created to show how notes may have looked if they were in use during the time of the Roman Empire. These were printed in 2007 but the dates on them reflect the ancient theme of the set. The monetary unit used here is the sestertius.

A sculpture of each respective Roman Emperor is displayed on the front of each note. The emperors depicted here include Augustus, Vespasian, Trajan, Hadrian, Marcus Aurelius, Diocletian and Constantine. Their values are 1 sestertius, 2 sesterces, 4 sesterces, 8 sesterces, 20 sesterces, 50 sesterces, and 100 sesterces. These monetary units were actually used for a period in the Roman Empire.

The reverse of each note is different. This side of each shows a famous Roman structure or something else that was associated with the emperor on the front.

All 7 of these fantasy notes are in uncirculated condition. They make a unique addition to any collection.

Add this (2007) Rome set of 7 Roman fantasy banknotes to your collection while you can!