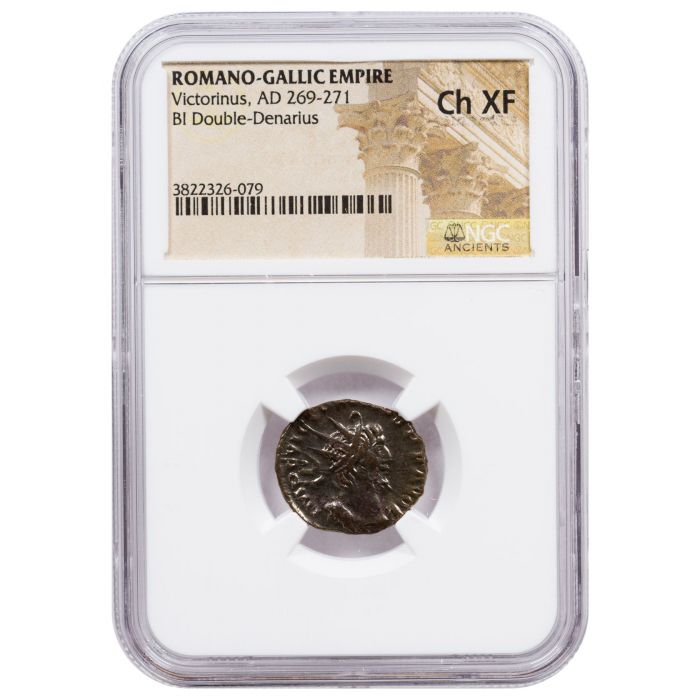 Skip to the beginning of the images gallery
ModernCoinMart is proud to offer this Romano-Gallic Billon Double Denarius of Victorinus. NGC Ancients graded it Choice Extremely Fine.

Why add this ancient Billon Double Denarius of Romano-Gallic Emperor Victorinus to your collection?

The Romano-Gallic Empire was a relatively small territory that broke away from the northernmost region of the Roman Empire during the Crisis of the Third Century, and functioned as a separate state for the short period of A.D. 260-274. Marcus Piavonius Victorinus was ruler of the Romano-Gallic Empire from A.D. 269-271. This Double Denarius was struck from a metallic alloy called billon, a bronze base metal with a light silver wash.

Imagery depicting the Goddess of Peace

The reverse features Pax, the goddess of peace, standing left, an olive branch and scepter in her grasp, accompanied by the inscription "PAX AVG." The Mint mark of Trier (Germany) appears, which is a "V" in the left field, and a star in the right.

This Billon Double Denarius of Romano-Gallic Emperor Victorinus is graded Choice Extremely Fine by the Numismatic Guaranty Corporation's ancient coin specialists. This beautifully struck coin, with a Sheldon Scale equivalent of 45, features complete details with visible wear evident on the highest surfaces. The coin's superb condition is protected in an NGC holder with grading certification label.