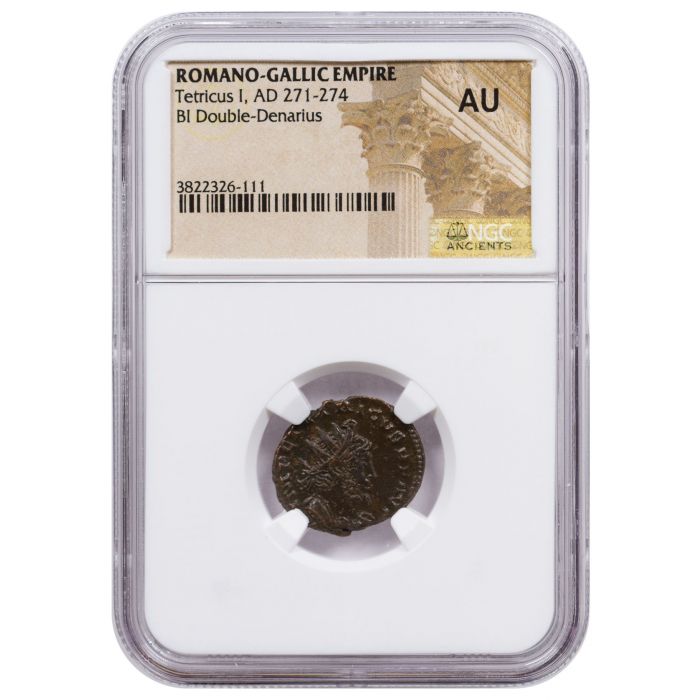 Skip to the beginning of the images gallery
Add this Romano-Gallic Empire Billon Double Denarius of Tetricus I to your collection! NGC Ancients graded it About Uncirculated.

Why purchase this Double Denarius of Romano-Gallic Emperor Tetricus I?

Tetricus I was ruler of the Romano-Gallic Empire from A.D. 271-274. Last of the Gallic Emperors, Tetricus co-ruled with his son Tetricus II until he surrendered to Roman Emperor Aurelian at the Battle of Chalons in France. This Double Denarius of Emperor Tetricus I is struck from a metallic alloy called billon, composed of a bronze base with a thin silver coating.

The obverse features the draped and cuirassed bust of Emperor Tetricus I in a radiate crown, surrounded by the inscription "IMP TETRICVS P F AVG" (Commander Tetricus: Pious, Happy Emperor).

The Roman Goddess Hilaritas appears on the reverse, holding symbols of joy and abundance: a long palm frond and a cornucopia. Inscribed "HILARITAS AVGG," meaning "cheerfulness of the Emperors." Known as the goddess of rejoicing, coins with the image of Hilaritas were traditionally distributed to the Roman people in celebration of the birth of a child to the Emperor.

This Billon Double Denarius of Romano-Gallic Emperor Tetricus I, struck A.D. 271-274, is graded About Uncirculated by NGC Ancients, the ancient coin grading division at the Numismatic Guaranty Corporation (NGC). This equates to a Sheldon scale rating of 50. This stunning coin will exhibit full design details, minor of wear on the highest points, an impressive strike, and more than half of the original Mint luster.

This magnificent Double Denarius of Romano-Gallic Emperor Tetricus I will be a sensational addition to your ancient coin collection!