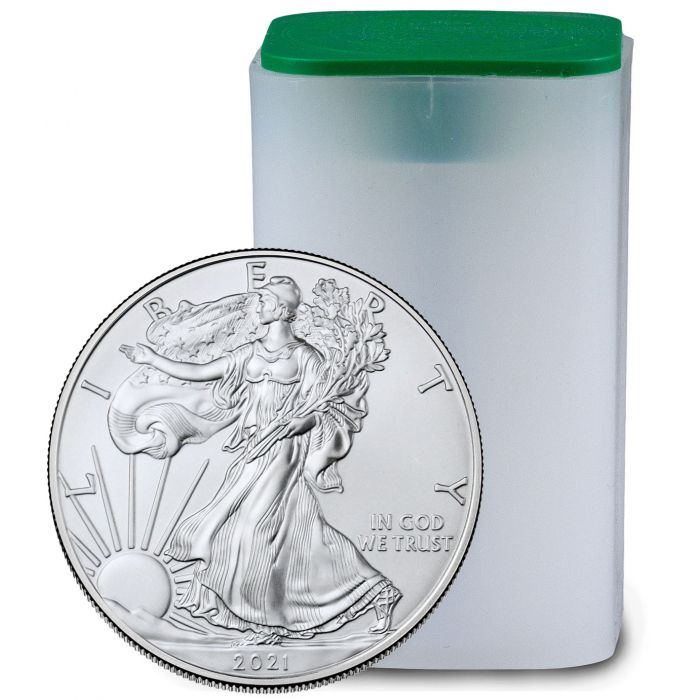 Skip to the beginning of the images gallery
Discover this highly coveted 2021 American Silver Eagle Type 1 in GEM Brilliant Uncirculated condition for your collection.

The American Silver Eagle is the world's most collected bullion coin and has featured the same iconic reverse design since the series was introduced in 1986. Later in 2021, the United States Mint will start issuing bullion American Silver Eagles with a brand new reverse design. That gives collectors one last time to enjoy one of the iconic design of American legend John Mercanti. Each coin in this roll of 20 will arrive in GEM Brilliant Uncirculated condition and will feature the series' original reverse design.

Obverse: The coin's obverse features Adolph Weinman's iconic Walking Liberty design, which appeared on the half dollar before returning for the Silver Eagle. Liberty carries laurel and oak branches, which represent civilian and military honors, against a backdrop of the rising sun. Her name, "LIBERTY," is inscribed on this face, as are the date, "2021," and the national motto, "IN GOD WE TRUST." Adolph Weinman designed two of the best known coins in American history, the Walking Liberty half dollar and the Mercury dime. He also sculpted numerous pieces that are on display in cities throughout the United States.

Reverse: An eagle protects a union shield under 13 stars in John Mercanti's reverse design. Mercanti modeled the image after the Great Seal of the United States. Rim inscriptions provide the name of the country that issued the coin, "UNITED STATES OF AMERICA," its weight, "1 OZ. FINE SILVER," and the coin's face value, "ONE DOLLAR." John Mercanti spent decades at the US Mint, part of which time was spent as the institution's Chief Engraver. Throughout his service, he designed more coins and medals than anyone else in American history.

Don't miss your chance to own this Roll of 20 2021 Silver American Eagles.