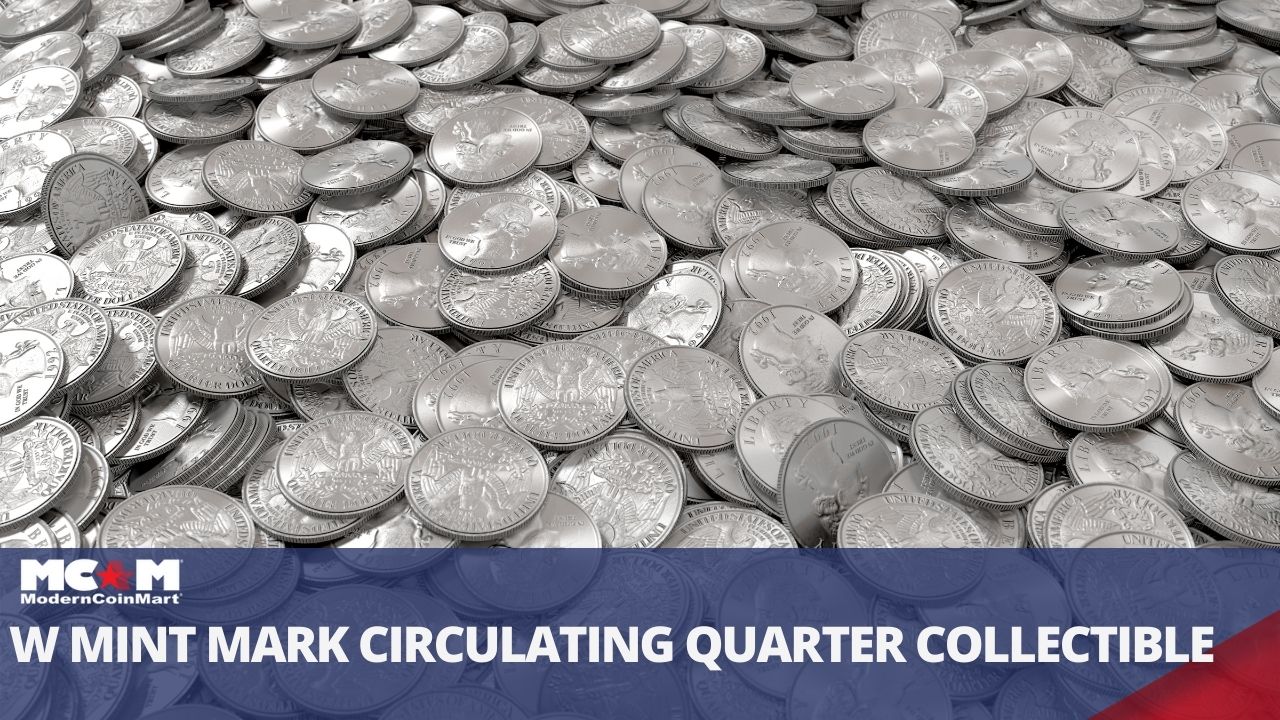 To celebrate the 96th annual National Coin Week, in 2019, the United States Mint released West Point Mint mark quarters into circulation for the very first time! In total, 10 million quarters, two million of each America the Beautiful Quarter, bearing the “W” mint mark will be mixed into circulation for lucky change holders everywhere to seek out.

The 2019 W-Quarters mark the first time that circulating coinage struck at West Point Mint has received a “W” mint mark.

"Firsts" within the coin collecting hobby always bring excitement to the coin world, especially for collectors working on full sets of a specific series. The mint mark also instantly distinguishes them from regular circulating quarters that do not have a mint mark. Will these be the only Quarters to ever bear the W Mint mark? Or is this the start of a larger tradition?

While 10 million coins may sound like a lot, the W quarters will only account for around 1% of the total circulating quarters produced in 2019, making them a significant find. For comparison, in 2018, the U.S Mint released more than 1.85 billion quarters into circulation whose mintages ranged from 289.6 million to 439.8 million across the five designs released last year. That is a LOT of circulating quarters.

What am I looking for in a W-Minted Marked Quarter?

The W mint mark will be located on the obverse, or “heads” side of the coin. It will appear right below the inscription “In god we trust,” and to the right of Washington’s pony tail. As mentioned above, the W mint mark will appear on America the Beautiful circulating quarters. If you are unfamiliar with the America the Beautiful Quarters Program, the US Mint began issuing 56 quarter-dollar coins in 2010. Each coin features designs depicting national parks and other national sites. This year’s line up features four national historic parks and one wilderness in the states of Massachusetts, Northern Mariana Islands, Guam, Texas, and Idaho, respectively. So far into 2019, only the Lowell National Historical Park and American Memorial Park Quarters have been released. As of April 2019, these will be the only quarters that can be found with the W mint mark. The War in the Pacific National Historical Park in Guam will not be released until June with San Antonia Mission National Historical Park in Texas and France Church River of No Return Wilderness in Idaho to follow later this year. Two million of each of these five designs will bear the W mint mark, so more will be added to circulation with every new release. Keep looking at your Lowell and American Memorial Park Quarters throughout the year, you never know what you might find!

Where should I be hunting for W-mint marked Quarters?

In the change in your pocket! These quarters will be distributed by the U.S Mint into bulk bags of quarters at the Philadelphia and Denver Mints. They will be mixed in with normal quarters that do not bear the W mint mark and will then be disseminated by the Federal Reserve to banks and financial institution, which means that these will start popping up in circulation (and they have) in early April. For those with less time and more money to spend, it is also possible to buy rolls of quarters from banks and hope that that elusive little “W” appears on one of the coins.

You Found a W-mint marked Quarter, now what?

You’ve been diligently searching your change, checking all your quarters for that elusive “W” mint mark, and you’ve finally found one! Now what? You are now part of numismatic tradition and have been introduced to the joy of finding a special coin release out in the wild, your hard work has paid off.

What is a Mint Mark and why does it matter?

A mint mark is a symbol, often a small representative letter, that appears on one face of a coin, usually the obverse or “heads” side, and identifies which Mint facility it was struck at. Originally, mint marks were used to identify which facility a coin was struck at should any problems arise. For example, if the there was a problem with the die used or something was off with the metal composition of a certain batch, the origin point of the issue was easy to find. Today, Mints continue to release coins with mint marks, largely as Numismatic tradition, to the delight of collectors. Often, collections are put together by mint mark and date. Sometimes, the presence of a certain Mint marks on a particular coin, can increase its value significantly. The United States Mint currently has four operating facilities, each with their own mint mark. They include Philadelphia (P), Denver (D), San Francisco (S), and West Point Mint (W).

What is the West Point Mint and What Is It known for?

While each Mint had their specialty, the West Point Mint located in New York State, is one of the more renowned branches. West Point generally produces collector strikes of coins including Proof Silver American Eagles, burnished silver eagles, and commemorative coins, among others. West Point is represented by a “W” mint mark. It is the most recent mint mark to be released, the first time it appeared on United States coinage was in 1983. While circulating coinage (the change in your pocket) has been struck at the Mint before, they never bore a mint mark, making it impossible to tell from which facility they originated, until the 2019 release that is.

What’s been found so far?

2019-W Quarters have started popping up around the country. Professional Coin Grading Service (PCGS) offered a $5,000-dollar bounty for the first W quarter submitted to them for grading. This prize was claimed by two people on April 9 that both split the prize. One of the Quarters was found in Topeka, Kansas and Fairfax, Virginia. Others have been popping up throughout the month. The W quarters are out there, waiting for you to find them!

The American Legion organization enjoys a history and reputation that is marked by service. It was founded in 1919 in Paris, France. The organization provides various forms of support to veterans and active service members and the communities in which they live. For the last century, the Legion has advocated on behalf of veterans and their families, including the creation of the U.S. Veterans Bureau in 1921. This organization is now known as the Veterans Administration. The Legion was instrumental in the creation of the G.I. Bill which has helped to educate and train former servicemen since after World War II. The Legion sponsors numerous programs for children and young people.