Una and The Lion Coin 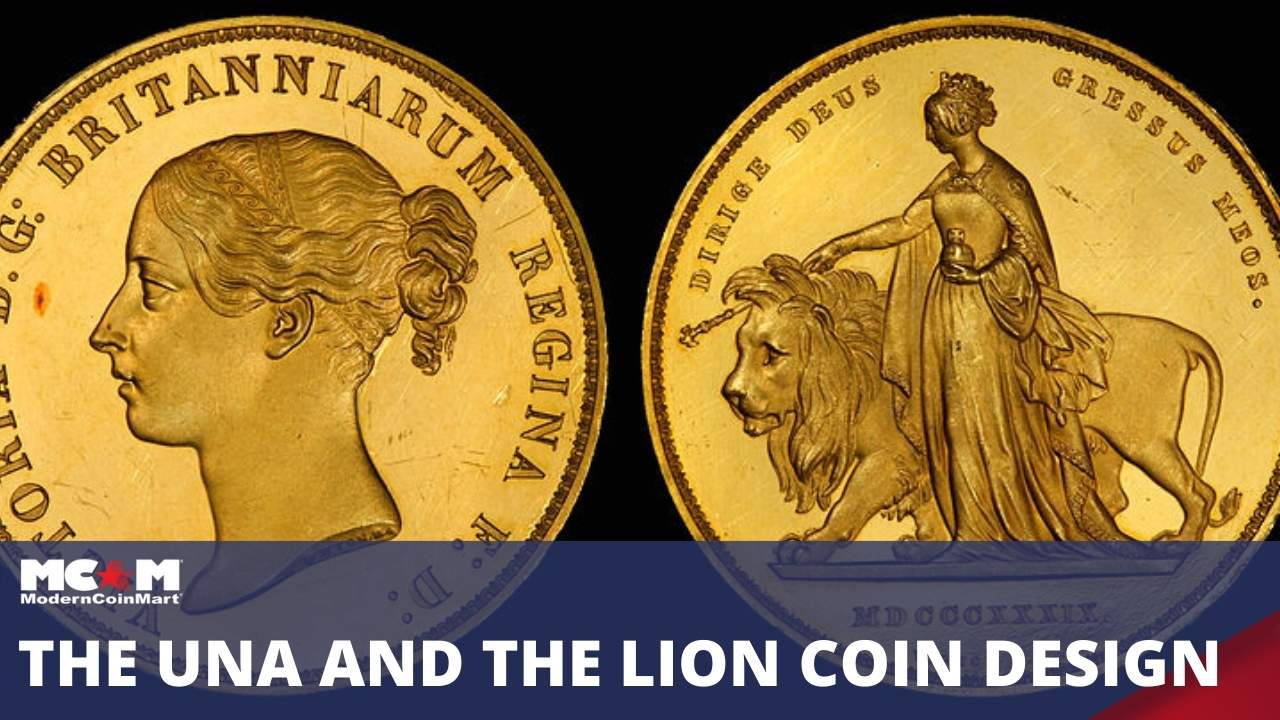 The Una and Lion Coin is one of the most stunning coins ever made. Read more to learn about this classic numismatic design and its modern iterations!

Who Designed the Original Una and Lion Coin?

William Wyon remains one of the most prolific and admired artists in the history of British coinage. Wyon was responsible for many classic numismatic designs from The Royal Mint including the Una and Lion design that first appeared on a 5 Sovereign piece in the late 1800s.  He was born in Birmingham, England, in 1795. He worked as an apprentice to his father, a die sinker, and later went to London in 1816. John Flaxman mentored him. Flaxman’s neo-classical style inspired Wyon’s work, helping him create “uncluttered and well-balanced portrait(s).” His work began appearing on coinage in 1816, and he later became the Chief Engraver of The Royal Mint in 1828. He continued designing coins until he died in 1851.

Wyon’s most famous work included his portraits of Princess, and later Queen, Victoria. She first sat for him when she was just thirteen years old, and he later made a medallic portrait for her 18th birthday. Wyon also designed portraits of her honoring her visit to London in 1837 and following her coronation as queen in 1838. The former, which depicted the monarch wearing a jeweled headband, served as the basis of the famous portrait on the 1840 Penny Black stamps.

More than a century and a half after his death, Wyon remains a giant of Britain’s numismatic history. His royal portraits and Una and the Lion coins continue to be admired by avid and casual collectors alike. Wyon was part of a family with connections to The Royal Mint. His uncle Thomas, Cousin Thomas Junior, and son Leonard all enjoyed successful careers with the institution. His time there also overlapped with another numismatic giant, Benedetto Pistrucci.

The story of the coin comes from a poem called “The Faerie Queen.” Written by Edmund Spencer and published in the 1590s, the poem is an allegory in praise of Queen Elizabeth I. One of the characters in it is Una, a young princess whose parents and kingdom were captured by a dragon. Una symbolizes truth and the Church of England. She set out on an adventure to free them. Among the characters that she met was a lion. The beast was captivated by her beauty and purity, so he stopped his attempt to attack her and instead became a companion and protector.

The original gold Five-Sovereign Una and the Lion coin was designed to mark the beginning of the reign of Queen Victoria. The precise story is unknown, but experts think it was struck for collector sets dated 1839, but those sets were delayed until 1843. The exact number originally struck is supposedly between 300 and 500. This design was the first-ever numismatic design to feature a British monarch as a fictional character. Collectors love the coin due to the contrast between a graceful princess holding an orb and the restrained yet tremendous power of the lion. What is extraordinary about the outstanding level of detail is that Wyon worked entirely by hand.

Una and Lion in the Modern Era

Today, mints are still striking and reimagining William Wyon’s original Una & the Lion Design. The Royal Mint strikes gold and silver bars with the design, as well as coins in multiple sizes and denominations. The East India Company strikes both gold and silver coins featuring the design as well. The coins are usually extremely popular among collectors who have a deep appreciation of numismatic history and British culture.

While Wyon made his original designs by hand, modern minting techniques and technology are used to make the new coins and bars. For example, The Royal Mint is no longer confined, as Wyon was, to working with the circumference of a coin. Instead, designs are cut into plaster models, which are optically scanned and digitally captured. A laser cutter is then used to reproduce the design with a precision that even Wyon himself could not have imagined. Both the gold and silver Una and the Lion coins are created this way.

The Enduring Popularity of the Una and Lion Design

Since Wyon’s time, especially in recent years, minting technology has improved drastically. Mints routinely issue colorized proofs, integrate unique design elements such as setting items into the metal, and striking pieces in ultra-high relief. Some might think that the availability of such exquisite and unique pieces would render a design from the early 1800’s passe. Nothing could be further from the truth, though, as interest in the Una & the Lion design is still high. Coins bearing the designs have often sold out in minutes. That Wyon’s original designs have not just survived but continue to thrive is a testament to their beauty and the remarkable skill, even by today’s standards, that went into creating them.

The original Una & the Lion coins were struck in gold. Today, though, both gold and silver Una & the Lion coins are available. The issuance of silver pieces has dramatically expanded the accessibility of these iconic designs to a broader range of collectors who may otherwise be unable to obtain them.

Even modern recreations of this coin have a majestic quality. The Royal Mint’s recent recreations have been struck as part of the Great Engravers Series. The coins come in stunning presentation cases. Fitting for a product steeped in such rich history, the case itself comes in a themed shipper.

Modern coins with images faithful to Wyon’s original designs have been issued in very low mintages in recent years. In 2019, the Royal Mint released just 3,000 two-ounce silver proofs and just 225 two-ounce gold proofs. The coins were also struck with a Latin phrase, “DIRIGE DEUS TRESSES MEOS,” which was struck on Wyon’s original pieces. The powerful words translate to “May God direct my steps.” The quote is a reference to the 119th Psalm, which reads, “Prepare my steps with your word, and do not allow any iniquity to rule over me.”

Today, ModernCoinMart offers both a Una & the Lion gold coin and a Una & the Lion silver coin, both from St. Helena and the East India Trading Company. These coins are prevalent among collectors who like classic numismatic themes with modern production standards and unique themes. Also available from ModernCoinMart are a 1 oz gold and a 100 oz silver Una & the Lion Bar from The Royal Mint in Great Britain.