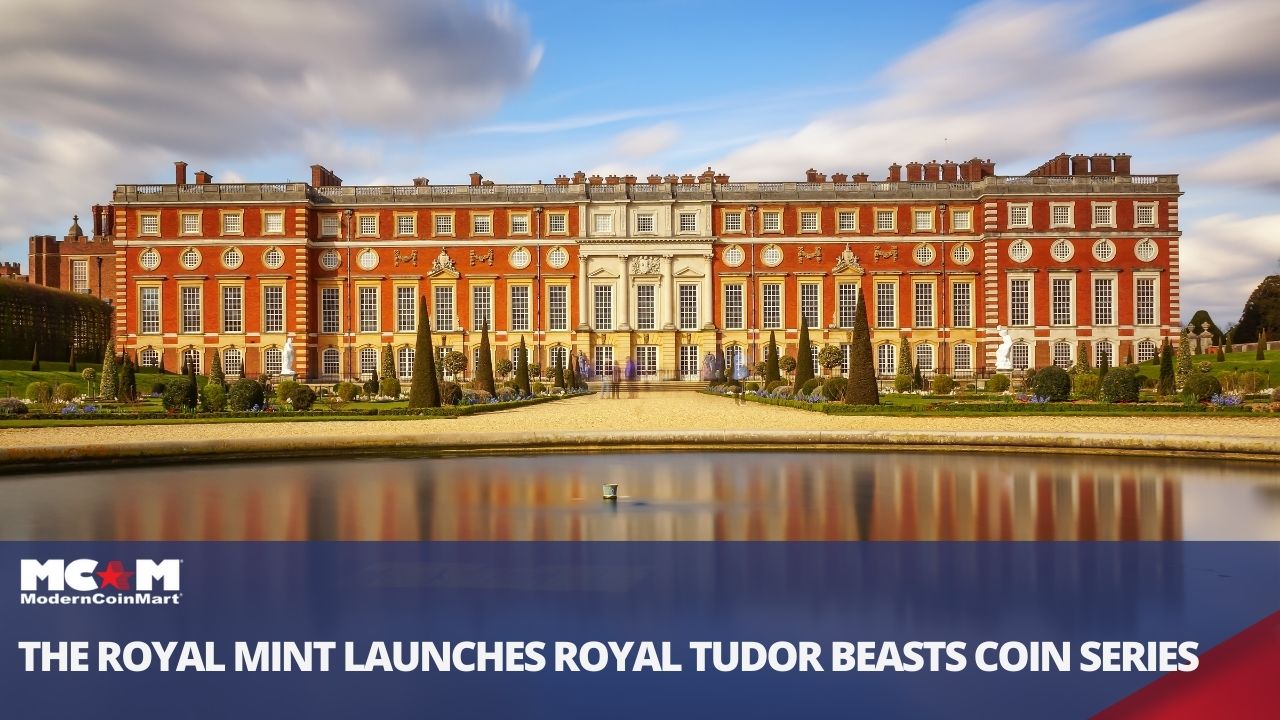 Fans of the hugely popular Queen’s Beasts Coin Series series from The Royal Mint, which recently ended, will be delighted to learn that a new series about British royal ancestry was recently launched, called the Royal Tudor Beasts coin series. Like the Queen’s Beasts, the new series will feature ten original designs to be released over five years in silver, gold, and likely platinum in both collector and bullion versions in a range of different sizes.

Called the Royal Tudor Beasts, the new coin series is inspired by and celebrates the ten statues of heraldic beasts that flank the famous Moat bridge of Hampton Court Palace – the over 500-year-old palace near London that was the home of legendary King Henry VIII and the Tudor dynasty. Henry VIII was one of the most colorful and charismatic figures in British history who ruled England from 1509 until he died in 1547.

King Henry VIII and the Legacy of the Tudor Dynasty

The House of Tudors was a royal house of Welsh origin that ruled England and its realms from 1485 to 1603. King Henry VIII is best known for having six wives, including his first to Catherine of Aragon, which he sought to have annulled. That led to a disagreement with Pope Clement VII and ultimately to the English Reformation, which separated the Church of England from papal authority and led to Henry VIII appointing himself the head of the Church of England. During his reign he notably oversaw the union of England and Wales and was the first English monarch to also rule as King of Ireland.

The palace was initially set up by Cardinal Thomas Wolsey in 1514 and then gifted to King Henry VIII, who brought all six of his wives there. King Henry VIII personally selected the ten beasts.

The Royal Tudor Beasts coin series is being issued in collaboration with the Historic Royal Palaces, an independent charity that helps maintain the palace and its collections. Part of the proceeds from the sale of each coin will go to support that cause.

Those ten mythical creatures -- like the ten heraldic beast statues that lined Westminster Abbey for the coronation of Queen Elizabeth II, which inspired the Queen’s Beasts coin series – were intended to represent the legitimacy of King Henry’s Tudor lineage to his father, King Henry VII, and his marriage to Jane Seymour.

Each reverse will feature an original design by David Lawrence of one of the beasts depicted to provide a balance between the natural elements of the creatures with a stylized heraldic motif incorporated into the design.

The Seymour Panther: First Release in the Tudor Beasts Series

The first design in the Tudor Beasts series debuted right at the Hampton Court Palace on October 6, 2021. Issued as silver and gold legal-tender proof coins, the first issue features the Seymour Panther. The Seymour Panther was first given to Jane Seymour -- daughter of Sir John Seymour and Margery Wentworth and third wife of King Henry VIII – from the royal treasury of beasts.

Jane Seymour became Queen after King Henry VIII’s second wife, Anne Boleyn, was executed. She was married to the King and served as Queen for the last year of her life from May 1536 to October 1537, passing away not long after giving birth to the future King Edward VI. She is the only wife of this king to receive a Queen’s funeral and be buried next to him.

The Seymour Panther depicted a panther with flames coming out of its mouth and ears known for its intoxicating fragrant breath that could charm other animals except for the dragon and represented the union of a committed consort and mighty monarch. This stone panther statue was originally one of a leopard that the king had given his first wife, which was modified into the Seymour panther to save money.

The Lion of England: Second Release in the Tudor Beasts Series

Issued in 2022, the second release of the Tudor Beasts coin series features the Lion of England, one of the oldest and most recognizable heraldic beasts. The creature first started appearing in Royal symbolism in the 12th century and even has been an integral component of the shield of England for its entire existence.

The Lion of England is prominently featured at Hampton Court Palace on the Moat Bridge. It holds a shield that bears the combined arms of Henry VIII and Jane Seymour, representing the strength of their relationship.

The Lion, which often symbolizes pride and courage, is depicted as an intimidating beast on the reverse of this issue. The titular creature appears snarling with sharp claws ready to attack, a royal crown atop his impressive mane.

Each coin in this new series will feature a reverse design by David Lawrence, who has been an illustrator and sculptor for more than 30 years whose work includes oil paintings. In recent years he has worked in museums and designing coins. His prior work for The Royal Mint includes designing the 2018 and 2019 Britannia Proof range of coins, which were inspired by William Wyon’s 1817 Britannia and Benedetto Pistrucci’s 1817 St. George and the Dragon design used on the British sovereign gold coin.

He noted of his new Seymour Panther design: “It was an honor to be chosen to depict the heraldic beasts on a coin and bullion collection as well as a huge challenge. Each royal beast comes down to us with centuries of heritage and meaning attached to them, so my task was to find a new vision that is still true to the past.”The design also includes a sense of motion or movement, showing the panther with its head turned and its mouth open as it grasps a shield with the Seymour wings on it. It manages to connect the past and present of British history through its original recreation of an old symbol.

Lawrence also has stated: “The beasts we see on the Moat Bridge at Hampton Court Palace are very stylized, in the sense that they’re created through a Tudor frame of reference. The Tudors would draw beasts that they had never before seen, basing their interpretations off reports or word-of-mouth. Therefore, these beasts are roughly 70% fictionalized. My aim was to take inspiration from these Tudor-carved beasts and modernize them, without losing their historical or heraldic importance.”

“I was also lucky in that I received an extremely detailed briefing document from The Royal Mint that included plenty of photographs of the beasts, coupled with extensive background information sourced from Historic Royal Palaces. So the beasts became my primary source of inspiration as they stand, in situ, on the Moat Bridge.”

ModernCoinMart is currently carrying the second issue of the series, the Lion of England in the form of a 10 ounce Brilliant Uncirculated silver coin. Crafted from .9999 fine silver, this 2022 dated coin also includes an innovative security feature that appears in its reverse design.

This article will be updated as issues in the series are revealed .