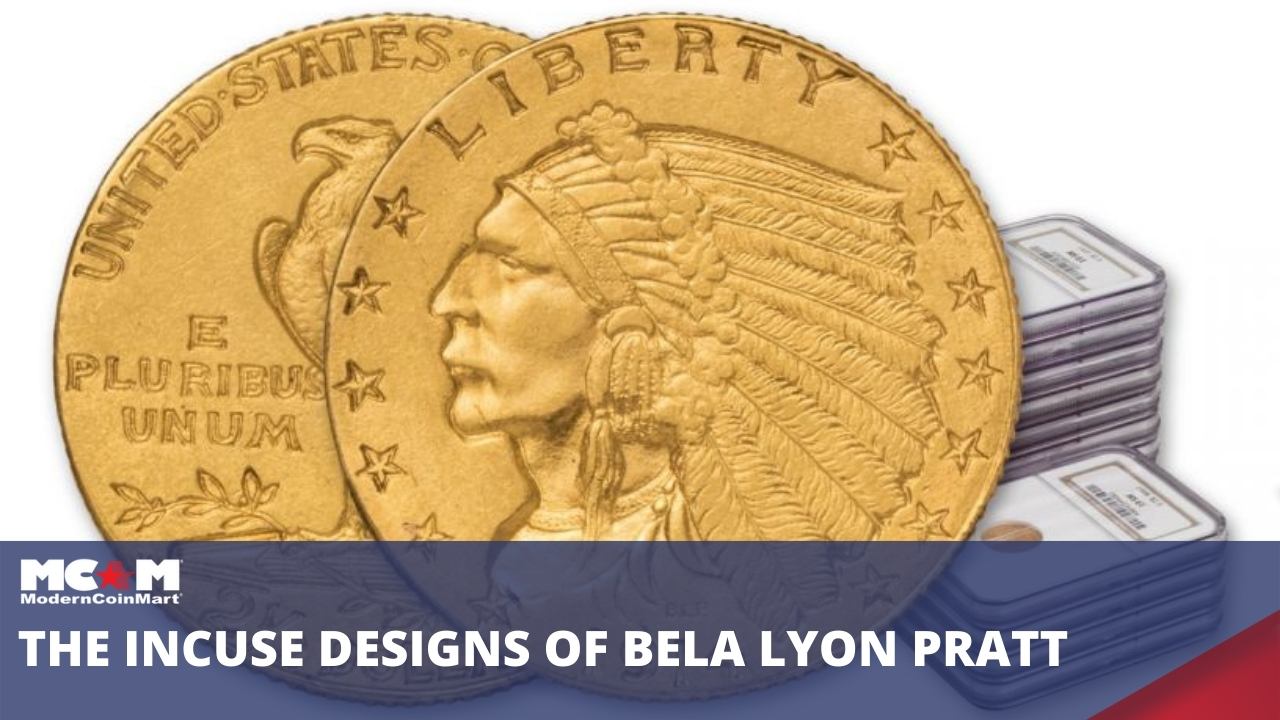 The Incuse Indian $2.50 Gold Quarter Eagle and the larger $5 Incuse Indian Half Eagle are both popular series with collectors. The man behind the incuse design that appears on the gold Indian heads is the noted American sculptor Bela Lyon Pratt.

Near the turn of the 20th Century, President Theodore Roosevelt grew tired of the longstanding Liberty Gold designs that were first struck in the late 1830s and, in the case of the “$20 Double Eagle,” 1849. He engaged the services of the remarkable sculptor Augustus Saint-Gaudens to redesign the circulating coinage of the U.S. The aim was to have a more artistic and beautiful appearance modeled on the high-relief coinage of the ancient Greeks and Romans. Saint-Gaudens only partially completed his task by the time he died in 1907. The minor gold coinage was yet to be designed. At the time it was assumed that the minor gold coinage would share the same design as the $20 circulating gold piece. Both fortunately and unfortunately, there were difficulties in translating Saint-Gaudens’ numismatic masterpiece to a smaller coin.

After the death of Saint-Gaudens, President Roosevelt was in need of a new artist. A confidant of the President, Dr. William S. Bigelow--a man with numismatic interests---suggested using the talents of a student of Saint-Gaudens, named Bela Lyon Pratt.

The man behind the incuse design that appears on the gold Indian heads is the noted American sculptor Bela Lyon Pratt. He was born on December 11, 1867. He studied at the School of Fine Arts at Yale University and The Art Students League of New York. His teachers included several notable 19th and early 20th Century artists, including Augustus Saint-Gaudens, who served as friends and mentors. Pratt also studied in Paris at the prestigious École des Beaux-Arts. Several of Pratt’s sculptures appear at notable cultural institutions and U.S. Government buildings along the East Coast of the U.S. from Boston to Washington, D.C.

Pratt and Bigelow had been working on a concept that would allow coinage to be struck in sculptural high relief, which was one of Roosevelt’s objectives and happened to be one of the reasons for the difficulty with the Saint-Gaudens designs. Their collaboration led to the minor gold coinage being referred to as “Pratt-Bigelow coins.”

The coin remains unique in the history of American coinage because the design was struck in high relief, and recessed into the planchet below the fields of the coin.

The iconic obverse features a proud Native American Chief in full headdress encircled with the word Liberty and thirteen stars. The year is noted below the bust along with the designer's initials: BLP. This design, a rugged and realistic depiction of a male figure, is a departure from the smooth and feminine depictions of Lady Liberty wearing an Indian headdress on the Indian Head cent, the Type 2 and Type 3 gold dollars, and the three dollar gold coins of the 19th Century. It’s also a departure from the $10 Indian design by Saint-Gaudens from 1907.

The reverse features a Bald Eagle standing on a clutch of arrows surrounded by an olive branch. The image was based on the reverse of President Teddy Roosevelt’s Inaugural Medal which was also designed by Saint-Gaudens. This iconography also appears on the 1907-1933 $10 Gold coin.

Originally struck from 1908-1915 and again from 1925-1929, the U.S. $2.50 Gold Quarter Eagle was a breakthrough in numismatic design that was not widely appreciated or saved from circulation at the time. A complete date and mint mark collection consists of only 15 coins, and as such, is a manageable and widely implemented strategy. The series was struck on .900 fine gold blanks, each containing .12094 oz. of bullion. Only two facilities struck the series, the Philadelphia and Denver branches of the U.S. Mint. The Denver Mint struck it only in three years: the widely available 1925-D, 1914-D, and the coveted key date of 1911-D.

The U.S. $5 Gold Half Eagle was struck from 1908-1916 and again in 1929, each containing .24187 oz. of gold. It was minted at Philadelphia, Denver, San Francisco and a single issue, the Key date 1909-O, was struck at New Orleans. The other sought-after issues from the series are the 1929 issue because of its absolute scarcity, and the 1914-S and 1911-D issues due to their status as condition rarities. There are 24 separate date and mint mark issues in the series which is a popular pursuit for collectors. Many collectors seek to put together a “short set” and get a specimen from each mint, including the Key Date, the New Orleans 1909-O.

According to both the Professional Coin Grading Service (PCGS) and the Numismatic Guaranty Corporation (NGC), the incuse quarter eagle is the most widely counterfeited series in Pre-33 U.S. gold issues. Counterfeits of every date are known. This is thought to be due to the wide popularity of the series with collectors as well as the difficulty in grading the series—which includes counterfeit detection. The Incuse Indian coins enjoy a significant premium over melt that the series enjoys in all grades, giving forgers more incentive than selling bullion. Many of the best counterfeits are thought to have originated in the Middle East in the mid-20th Century when gold bullion ownership was not lawful for U.S. citizens, except for limited instances like coins “with numismatic value.” These counterfeit issues typically are created with the same .900 fine gold as the originals but obviously lack numismatic credibility or collectability. Many collectors favor examples of the incuse Indian Gold coins to be encapsulated by reputable third-party grading companies because the graded coins are authenticated during the process of grading.

Eagle Key Date coin is the 1911-D. There are two mint mark varieties: the “strong D” which is apparent to the eye and the “weak D” which is much more subtle. Often the mint mark is so faintly visible that the issue is identified by consistent die markers on other areas of the coin.

The Incuse Half Eagle Key date is the previously mentioned 1909-O, with an honorable mention to the 1929 Philadelphia issue.

Due to the recessed nature of the design, these two series present challenges to regular collectors and professional numismatists alike. Areas of the obverse design that should be paid particular attention to are the feathers, especially on the ends near the bottom of the coin nearest the date; the brow of the chief; and the most recessed areas of the neck, which could reveal tooling marks that would expose a counterfeit.

The reverse design is often worn around the shoulder of the eagle. Both sides of the coin are prone to marks, nicks, and evidence of handling on the fields since the fields are the highest point on the coins. Clear, bright, lustrous unmarked fields are sought after in the series and greatly enhance eye appeal and collector interest.

The coins were not widely used in commerce; the quarter eagles, like their Liberty design predecessors, were given as popular Christmas gifts and often struck late in the calendar year.

Due to the design innovation, it was thought that the coins may harbor germs more than traditional issues. It was feared the germs would lurk below the fields in the recesses of the coin.

It was also thought that the Indian chief looked sickly, emaciated, or ill.

Many of the coins from these series were melted in the 1930s after President Franklin D. Roosevelt’s infamous gold recall.

If these Pratt-Bigelow coins inspire you, you’re not alone! The Incuse design concept has been used in contemporary times by the Highland Mint for their incuse 1 oz. .999 fine silver rounds, which use a variation on the Pratt-Bigelow design and the Royal Canadian Mint for their popular Incuse Silver Maples.

Order your classic Pre-33 Gold Incuse Indian $2.50 Quarters and $5 Half Eagles and these thrilling modern issues that take inspiration from them here at MCM.