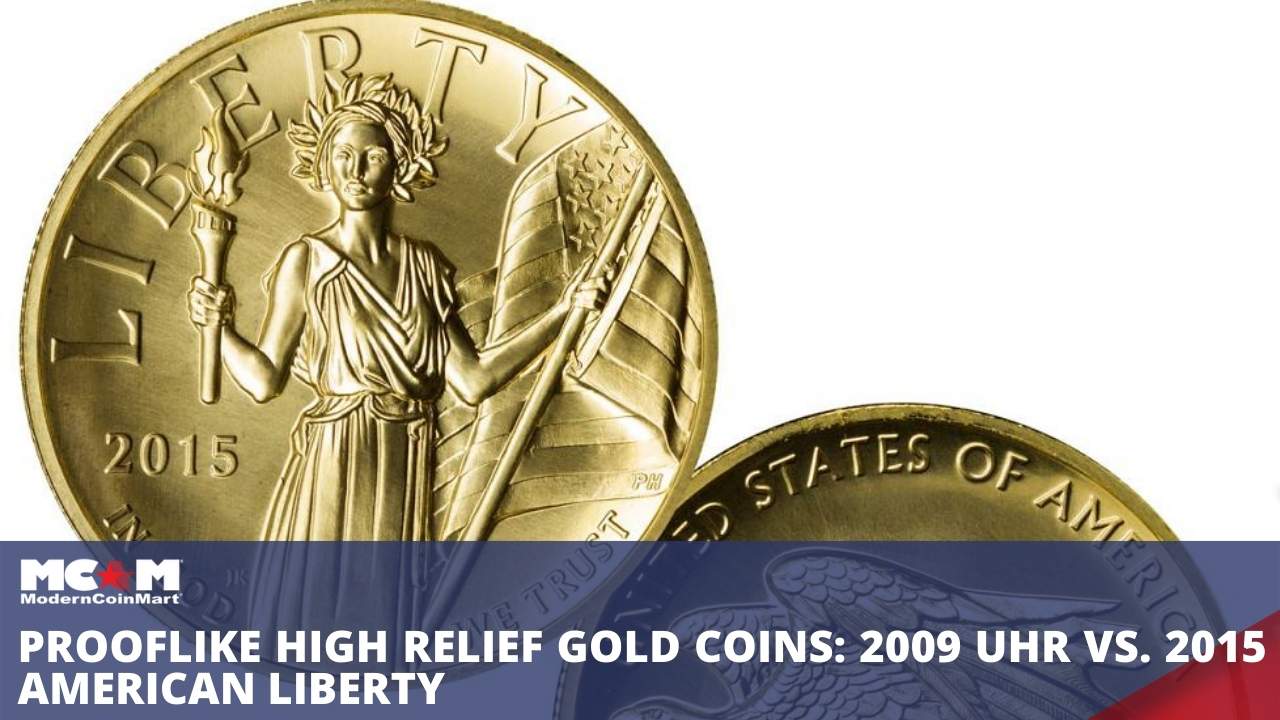 The U.S. Mint has issued two modern gold coins struck in high relief – one is the 2009 Ultra High Relief gold $20 double eagle, and the second is the 2015-W American Liberty high relief gold $100 coin that was released on July 30th.

Scarce prooflike examples exist of both coins, and they sell at a high premium over non-prooflike coins, especially in prooflike 70 grades, where they sell for many multiples of the non-prooflike coins.  One major auction company recently sold a prooflike 70 of the 2015 high relief coin for more than $13,000, whereas the same coin in regular mint state is available from the U.S. Mint for $1,540.

Interest in the prooflike examples of these coins has helped spur greater interest in both high relief gold issues in part because buyers of the coins in original government packaging hope they will receive a coin that is prooflike.

But what exactly is a prooflike gold coin? It is simply a coin whose surfaces are deeply reflective, which is not normally found on bullion or business strike gold coins. Bullion gold coins normally have a matte or satin-like look to them unless they are proof coins, which are prepared in a different way using specially polished planchets that are struck two or more times.

More specifically, a prooflike coin is a business strike gold coin that exhibits a highly reflective surface similar to a proof coin that was not intentionally made that way.  The main difference between a prooflike and a proof coin is that only proof coins have cameo contrasts, i.e., a strong contrast between the mirrored fields and the frosted design devices.

As Scott Schechter, who is a top NGC coin grader, explained in the September 14th issue of Coin World, coin graders determine if a coin has prooflike surfaces by holding an object above the coin’s surface and seeing if the object’s image is reflected on the coin.

“To qualify for the prooflike designation, the reflected image will need to be sharp throughout the entire field area on both obverse and reverse,” he noted.

In addition to being very different in appearance from mint state coins, prooflike gold coins are seen infrequently and are usually very scarce.  In fact, of all the gold bullion coins issued by the U.S. Mint since 1986, only two other coins, the 1994 and 1994 American Gold Eagle coins, have been found in prooflike condition apart from the two high relief issues, and Mr. Schechter explained that fewer than 20 examples exist for those two Gold Eagle issues combined.

Robert Lecce, a former coin dealer and numismatic expert who passed away a couple years ago, explained in February 2010 on the website, Coin Update.com, that when it comes to the 2009 coin, many coins have degrees of prooflike finish that do not always qualify as fully prooflike. In particular, the obverse is more often seen as prooflike than the reverse, but to be a true prooflike example he believed the coin has to have it on both sides.

“I believe that the PL coins are very early struck coins on newly prepared dies. I believe the High Relief of the coin requires the changing of the dies at specific intervals which affect how often a PL strike is possible. I also believe that the metal flow from the High Relief dies cause the early struck coins to have a PL Surface,” Mr. Lecce told Coin Update about a year after the coin was first released.

On the other hand, in the period since Mr. Leece made those remarks many other people have expressed the view that it is more likely that the 2009 prooflike coins were produced from dies used to make some of the last coins struck.  That conflicts with Mr. Lecce’s experience, which is that he found prooflike coins right from the beginning.

Several weeks after the 2005-W American Liberty high relief $100 gold coin was first offered for sale by the U.S. Mint prooflike graded examples of these coins began to emerge in the coin market.

These coins appear to be considerably more rare than the 2009 prooflike high relief coins, at least based on currently available data from the grading services. This view is also reflected in the opinion of dealers who are involved in trading the 2015 prooflike coins.

However, it is worth noting that the 2009 coins initially traded for higher premiums than they do today now that their actual level of scarcity is clearer after more coins have been graded.  Premiums for the 2015 coins are also likely to fluctuate, and it is possible that if a substantially higher number of them emerge over time, their premiums may also decline.  But so far less than 1% (0.07) of the current mintage of the 2015 coin exists in prooflike, which means for now at least they are about five times scarcer than the 2009 prooflike coins.

These numbers are likely to change as more coins are graded, but for now at least it is certainly the case that the 2015 coin is indeed substantially more scarce than the 2009 coin in prooflike condition.

He also said that it is not the high relief feature of these coins that creates prooflike examples, but rather it is the finish.  In particular, he said he suspects “the final polishing is an operator-controlled process (perhaps simply hand polishing).  Whether it’s the amount of polishing compound, the time taken, etc., some dies are more heavily polished than others.”  In other words, it is the heavily polished dies that produce the fully prooflike coins.

Based on Mr. Schechter’s expertise, it appears that the frequently expressed view that prooflike examples of the 2009 coin were mostly struck towards the end of the Mint’s production of those coins is most likely incorrect, and it is likely that the same pattern holds for the 2015 coins as for the 2009 coins.

Given both their scarcity and the stunning and easily identifiable difference in appearance between regular Mint state and prooflike examples of both the 2009 and the 2015 high relief gold coins, it seems likely that these prooflike coins will remain a highly desirable modern rarity for the foreseeable future.

In addition, there will be collectors who want to acquire a set with both the 2009 and 2015 proooflike coins, and that may also result in increased demand for the 2015 prooflike coins.