History of Gold Bullion Coins: The Krugerrand and Beyond 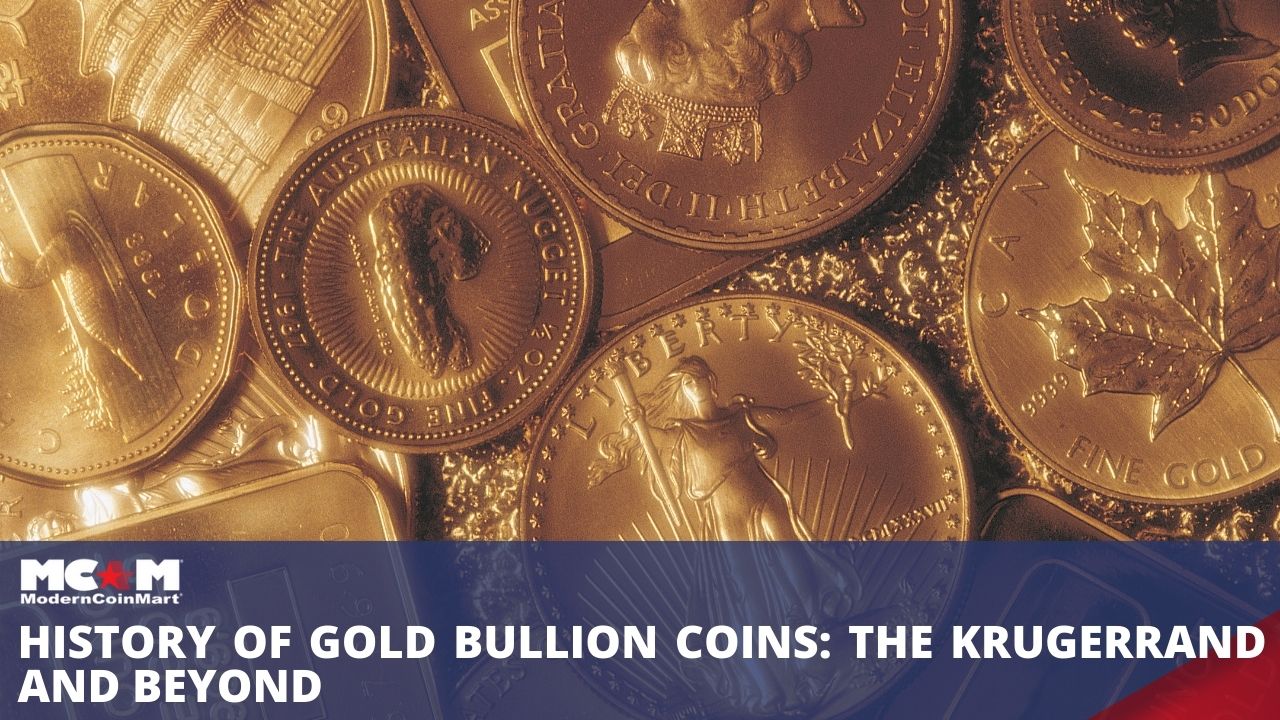 In the mid-1960s, the Bretton Woods system of stable exchange rates was coming apart with growing fears of inflation and increasing pressure on the dollar -- the world’s reserve currency.  This instability was partly because the United States did not have enough gold to back all the dollars out there. In 1971, the lack of enough gold to back dollars led President Richard Nixon to end the convertibility of the dollar into gold, which made the dollar a fiat currency. Many investors wanted hard assets like gold bullion to protect against the debasement of their money, but few options existed for the retail buyer apart from British gold sovereigns.

The South African Chamber of Mines saw an opportunity to promote gold exports from their mines profitably while giving investors a way to purchase gold through the creation of a new type of coinage – gold bullion.  Such investment coins would have no export duties since they would be legal tender issues.

1967 saw the birth of the world’s first gold bullion coin – the Gold Krugerrand, whose name was a combination of the last name of South African leader Paul Kruger and the rand, the country’s currency. Issued by the South African Mint, their obverse has a profile of Kruger, while the reverse features a springbok, an animal similar to an antelope found in the country.

However, the coins, which are still issued today, do not include a monetary value. Their value is based entirely on the prevailing price of gold. They are made of .917 fine gold with a copper alloy to make them harder, which also gives them an orange-colored sheen. This level of purity is known as crown gold, the same alloy used for British gold sovereigns.

Through 1969, fewer than 50,000 Krugerrands were issued annually. Still, mintages kept growing as the demand for gold bullion continued to rise around the world due primarily to the legalization of gold ownership in the U.S. in 1974. That move set the stage for a growing market of legal tender, government-issued, and backed gold bullion coins, pushing Krugerrands sales to over 3 million a year by 1974.

By 1980, Krugerrands accounted for 90% of the world's gold bullion market. This situation continued into the early 1980s, but by mid-decade, there was growing global concern about the South African policy of racial segregation known as apartheid. In October 1985, President Ronald Reagan signed an executive order banning the importation of Krugerrands into the U.S., which was only lifted in 1991 by President George H.W. Bush after the end of apartheid. In the 53 years since the coin debuted, over 60 million gold Krugerrands have been struck.

As the taint of apartheid dulled the Krugerrand’s appeal, an opening was created for other mints around the world to issue their own sovereign gold bullion coins. Mints from Canada, the United States, China, Great Britain, and more, would debut their own gold bullion coins in subsequent years.

Canada was another country that, since the late 19th century, had large gold deposits. Mining companies lobbied the Canadian government to produce gold bullion coins made of gold mined in Canada that would be aimed at investors in their own country and the U.S. and beyond. It would also be an alternative to the Krugerrand for those with moral qualms about that coin.

In September 1979, the Royal Canadian Mint issued the world’s first 24 carats (.999 fine) gold bullion coin known as the Gold Maple Leaf, which featured an obverse with an effigy of Queen Elizabeth by Arnold Machin and a reverse with a design by Walter Ott of a single maple leaf.

By 1986 – the same year, the American Gold Eagle bullion coins debuted -- Canadian Gold Maple Leaf coins held two-thirds of the gold bullion market. Gold Eagles were also designed as an alternative to Krugerrands and were required by law to be made from gold mined in the United States so long as it was available. In fact, the coins were composed of the same gold-copper alloy and had the same .917 fineness as Krugerrands.

American Gold Eagles were issued from the beginning in 1 oz, ½ oz, ¼ oz, and 1/10th oz as well as in proof versions in each size. The obverse features the popular Saint-Gaudens double eagle design. At the same time, the reverse carries a new design called the Family of Eagles.

In addition, while American Gold Eagles quickly became the world’s leading gold bullion coins, by the end of the 1980s, the Canadian Maple Leaf gold coins regained their status as the leading gold bullion issue. The popularity of the gold Maple Leaf was because of the growing demand for pure gold coins, especially from investors in Japan and Hong Kong. At the same time, buyers in Europe and North America turned to the stock market.

This shift in market sentiment – which was also spurred by declining demand for gold as spot prices fell – led mints around the world to begin marketing gold bullion coins as numismatic coins too by issuing them in low mintages and relying more on proof gold coins. The focus on the collectability of gold coins spurred more world mints to enter the gold bullion coin market with coins aimed at bullion buyers and collectors.

These coins feature a different depiction each year on their reverse of the beloved, cuddly giant panda, which is both a symbol of China and of the World Wildlife Fund. Gold Pandas were also the first gold bullion coins to feature changing annual designs. The decision to change the design every year was made to increase their international appeal and to make the coins more collectible. The obverse features a model of the Temple of Heaven in Beijing.

In 1983, 1/20th oz coins were added, the world’s smallest gold coins at the time, and in 1991, 1-gram pieces were added. In 1995 frosting was added to the finish of Gold Pandas, which gives them a cameo appearance similar to that on proof coins.

In 2015 the coins were issued without a weight, which was a precursor to 2016 when the coins switched to the metric system used in China. Since then, Panda gold bullion coins have been issued in 30 grams, 15 grams, 8 grams, 3 grams, and 1 gram.

From 1982 to 2000, the coins were minted to demand, and since 2001 annual mintages for each denomination have been limited and declared at the time of issue. Mintages of these coins tend to be among the lowest of any gold bullion coins.

The Royal Mint of the United Kingdom is also a world leader in gold bullion coinage. Since 1817 it has issued gold sovereigns, which were promoted in international trade and made at various colonial mints in Australia, Canada, and India. Their small size and weight of .2354 oz made them accessible to many buyers.

In 1987 the mint introduced the gold Britannia, which has a face value of 100 pounds and features a portrait of Queen Elizabeth on its obverse and an image of Britannia – the female personification of Britain – on the reverse.

The original reverse design is by Philip Nathan. It shows Britannia wearing a Corinthian helmet and holding a trident in her right hand and a shield with the Union Jack flag in her left hand. Through 2012 this design was sometimes used, while other times, a different Britannia design was featured and proof coins with the same design as that year’s bullion coins were also issued.

Since 2013 the bullion coins always use the Nathan design, while proof coins feature a different and original depiction of Britannia each year, sometimes with a more classic motif and other years with a more modern look.

In subsequent years, other world mints have introduced their own legal tender gold bullion coins, including others besides Pandas that have changing designs such as those of the Perth Mint. The five iconic gold coins discussed above were the original market makers in this field and remain the world’s most popular coins of this type.