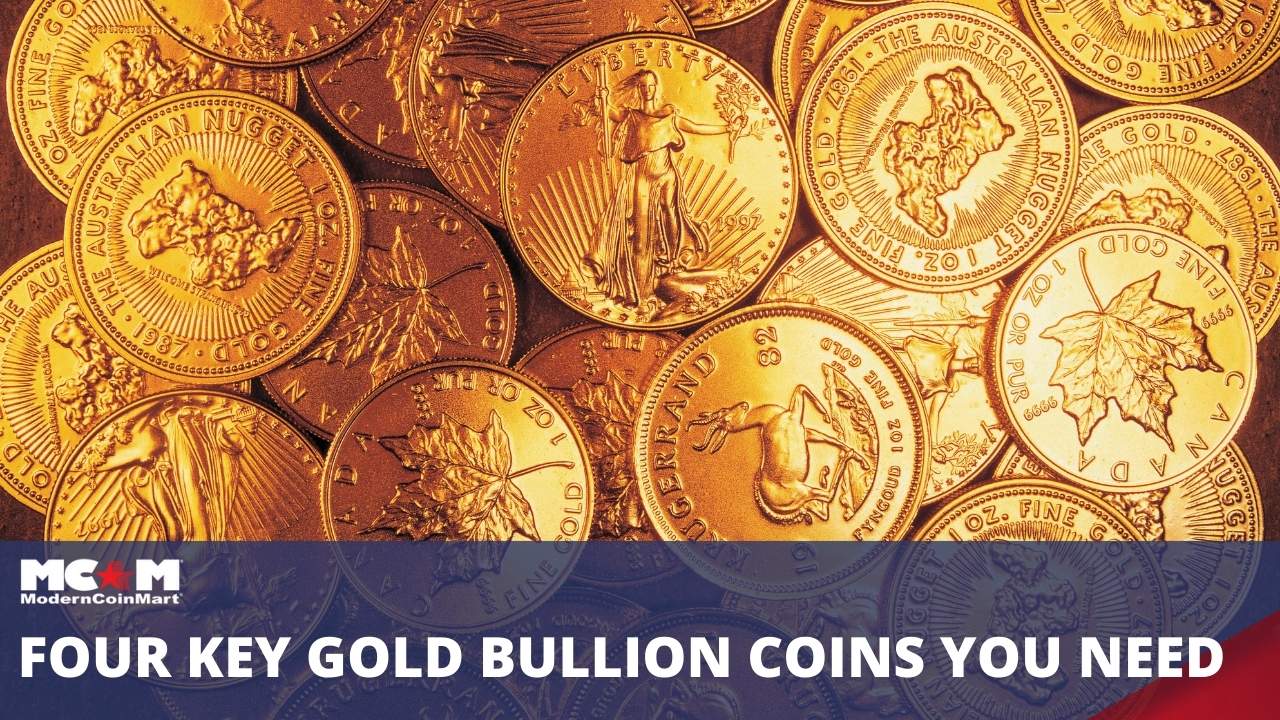 Whether you are a gold stacker, or someone who enjoys putting together sets of gold coins, these are the four gold coins that you need!

Issued since 1986 in 22-karat gold, American Gold Eagles are the nation’s official, sovereign, and legal tender gold bullion coins, which were created through passage of the 1985 Gold Bullion Coin Act during the Reagan Administration, and which are backed by the U.S. government for their weight and purity.

These coins, like most U.S. coins issued since the founding of the U.S. Mint feature Lady Liberty on one side and an American eagle on the other.  The obverse depicts the famous design of Lady Liberty by Augustus Saint Gaudens that shows her confidently striding forward with flowing hair holding a torch in her right hand and an olive branch in her left hand.  The torch is to light the way to a better future, while the olive branch symbolizes the American commitment to peace.  In the background are sun rays and in the lower left field the U.S. Capitol.  The reverse features an image of a family of eagles designed by Miley Busek.

American Gold Eagles are the most widely traded gold coins in the country, making them very liquid, and are also cherished for their beautiful design.  They come in four sizes – 1 oz, ½ oz, ¼ oz, and 1/10 oz – and are also issued in proof for collectors in all four sizes and in a 1 oz burnished uncirculated version, which each carry a “W” mintmark for the West Point Mint (except the bullion coins).  There is also a reverse proof issued for the coin’s 20th anniversary in 2016.

In addition, collectors of the series also seek out high-graded examples in MS70 and PF70.

Issued since 2006, the American Gold Buffalo coin was the U.S. Mint’s response to the growing popularity of pure (.9999 fine) gold coins in the bullion market.  They are made from 24-karat gold and feature another of the most iconic and well-known designs that first appeared in 1913 on the Indian head nickel.  Designed by artist and sculptor James Earle Fraser, they depict on their obverse a right-facing profile of a Native American that was based on a composite of three different Indian tribe leaders.  The reverse shows a slightly-modified version of the famous Black Diamond Buffalo on a mound that appeared on the Indian Head nickel and which resided in New York’s Central Park Zoo when the artist worked on the design

These coins were established through the Presidential $1 Coin Act, which also established that series and the $10 First Spouse gold coin series, paving the way for the Buffalo gold bullion series, which has also been issued in proof finish annually since 2006.  The coins are issued at the West Point Mint, but only the proof coins carry a “W” mintmark.

In 2008 the Mint issued fractional versions of this coin in burnished uncirculated and proof finishes, which is the only year that has been done, making those coins highly sought after.  In addition, for the 10th anniversary a special reverse proof Buffalo gold coin was released, also a one-year only coin.

Between their gold purity and popular design, these coins are considered very collectible in all versions, including graded examples.

Issued since 1967, the South African Gold Krugerrand was the world’s first sovereign gold bullion coin.  Its name is a combination of the last name of South African Republic president from 1883 to 1900, Paul Kruger, and rand, the nation’s monetary unit after it became independent from Great Britain in 1961, which traces its origins to the Witswatersrand, an area known for substantial deposits of gold.

Before this coin was launched, the physical gold market consisted mainly of British gold sovereigns and Mexican gold pesos.  Made from 22-karat gold, the coins do not actually carry a monetary value and their value fluctuates with the price of gold.  The coins were created to allow everyone to own some physical gold available at probably the lowest premium over the melt value of any bullion coin.

The obverse of the coins features an effigy of Paul Kruger by Otto Schultz, who was die cutter from the Berlin Mint.  This design first appeared on coins issued in the 19th century.  The reverse of the coins depicts a springbok, an animal indigenous to South Africa, similar to an antelope, and this design is the creation of Coert Steynberg.  The design previously appeared on silver 5 shillings and gold rand and pound coins.

Krugerrands are also issued in the same four sizes as other major gold bullion coins and in proof.  In addition, since 2017 they have been issued in silver with both uncirculated and proof finishes.

Issued since 1982, the China Gold Panda is the official sovereign gold bullion coin of the People’s Republic of China.  Unlike most other major world bullion gold issues, the Panda has featured a new reverse design each year (except for 2002) since it was first introduced.  The coins are produced at various branches of the Chinese mint, but there is no indication of where they were made on the coins.

The obverse depicts a front-facing views of the famous Temple of Heaven in Beijing, an imperial complex of religious buildings that is one of the world’s best-known structures.  Above it is along the rim is an inscription in Chinese that translates as “THE PEOPLE’S REPUBLIC OF CHINA” and below it the date.  The reverse features a different image of one or more pandas each year, the beloved animals that are synonymous with China.  Until 2014 this side also featured the weight of each coin, the metal, and the purity.  There is also an inscription for the denomination.

In 2015 the mint dropped inscriptions for the weight of each coin, and the following year it began using gram weights, which are inscribed on the reverse, along with the other details that normally appear on this side.

Gold Pandas are highly values for their purity (.999 fine), their high quality, and their changing designs.  If purchased ungraded, they come in a protective capsule sealed in plastic, which is one of the reasons they tend to be of such high quality.  They are also available in graded examples.