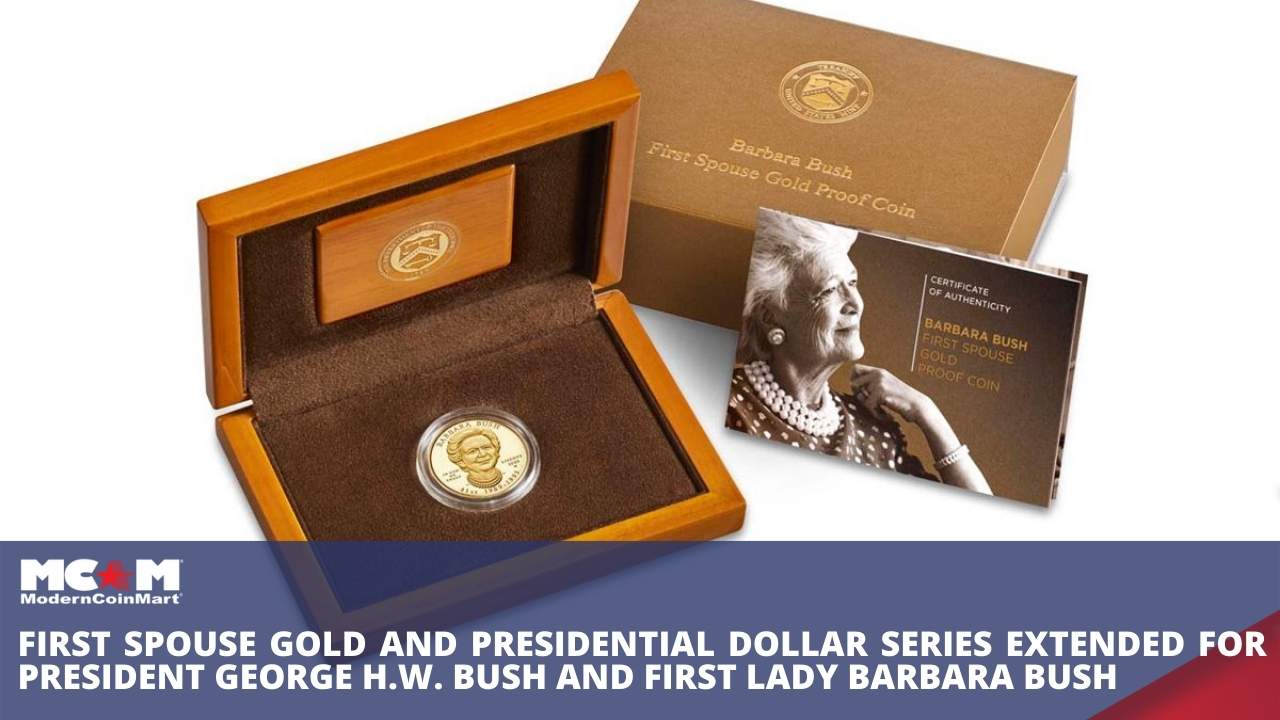 In 2016, the First Spouse and Presidential Dollar coin series, which both began in 2007, ended with coins for President Ronald Reagan and Nancy Reagan, that changes in 2020. Under the 2005 law that created both series, coins can only be authorized for Presidents and First Ladies after two years have passed since they died. For more information about the History of U.S Presidents in Numismatics, read this Info-Vault article.

However, in a move that happens rarely, legislation authorizing an extension of both coin programs, Public Law 116-112 (President George H.W. Bush and First Spouse Barbara Bush Coin Act), was signed into law by President Trump on January 27, 2020. Former President George H.W. Bush passed away on November 30, 2018, and Barbara Bush died a couple of months earlier on April 17, 2018.

The Barbara Bush $10 first spouse gold coin will be released by the U.S. Mint on August 20 and sold in both Proof and Uncirculated versions like previous First Spouse coins. The Proof coins will have a maximum mintage of 3,000 coins, while the Uncirculated ones will be limited to a maximum of 2,000 coins. Both will have a household order limit of one coin.

George H.W. Bush presidential coins will be released later this year, starting with rolls, bags, and boxes sold at a small premium over their face value. In addition, the $1 coin will also be released in a Coin and Chronicles set that should include a Reverse Proof version of that coin as well as a silver medal and other items. A Barbara Bush bronze medal will be released in a set paired with the $1 coin. Likely, additional versions of the dollar coin will also be released featuring Proof and Uncirculated finish coins.

First Spouse gold coins are made of one half-ounce of 24 karat, .9999 fine gold, and were the first gold coins of that size ever issued by the U.S. Mint in pure gold. This series saw its mintages decline over time primarily because of rising gold prices that pushed issue prices from about $400 to over $1000.

Those gold coins were authorized under the Presidential Coin Act of 2005 (Public Law 109-145). The act also authorized the issuance of presidential dollar coins made of manganese-bronze for each U.S. President who had been deceased for at least two years starting with the George Washington coins. The program was created by former Rep. Michael Castle, who also created the State quarter series and believed that $1 coins depicting American presidents would be more popular than previous modern dollar coins.

Americans tended not to spend these coins, as has been the case with other modern dollars, and typically saved them when received in change. This resulted in large numbers of them accumulating in Federal Reserve banks. In 2011 the Mint stopped making them for circulation and only issued them for collectors sold at a premium, including in annual sets and other products. This change resulted in much lower mintages for the coins from the final years of the program.

The designs of both coins were launched on July 28 by the U.S. Mint. The 2020-W Barbara Bush gold coin’s obverse features a front-facing portrait of the former First Lady smiling that was the preferred choice of the Bush family and the Citizens Coinage Advisory Committee. It also includes the inscriptions “BARBARA BUSH,” “IN GOD WE TRUST,” “LIBERTY,” “2020,” “41st,” and “1989-1993.” The design was created by Artistic Infusion Program artist Benjamin Sowards and sculpted by Mint Medallic Artist Phebe Hemphill.

The reverse design pays homage to Mrs. Bush’s advocacy for family literacy. The design depicts a person reading with an open road before them. The open book symbolizes literacy, education, and knowledge. The road symbolizes the journey of life, and the sun in the distance is the promise of a brighter future. Inscriptions are “UNITED STATES OF AMERICA,” “E PLURIBUS UNUM,” “$10” “1/2 oz.,” and “.9999 FINE GOLD.” The design was created by AIP artist Barbara Fox and sculpted by U.S. Mint Medallic Artist John P. McGraw.

This coin carries the conventional reverse design for the series (and reprised for the current American Innovation dollars). It features the Statue of Liberty that was designed and sculpted by former Mint Sculptor-Engraver Don Everhart. The inscriptions “2020,” “E PLURIBUS UNUM,” and the mint mark are incused on the edge of the coin.

President George H.W. Bush served one term from 1989 to 1993 as the 41st president. After graduating from Yale University, he moved to Texas, where he established an oil company and ran for a seat in the House of Representatives, being elected in 1966. In 1971 President Nixon appointed him to be U.S. Ambassador to the United Nations, and President Ford later appointed him to be our chief liaison to China. He also served as Director of the CIA. In 1980 he was elected Vice President to President Ronald Reagan and served two terms in that role until 1989.

He believed in a kinder and gentler former of Republican politics and was known for his pragmatism and caution. His most important legacy is his crucial role in ending the Cold War peacefully and promoting U.S. global leadership to augur a more hopeful era in geopolitics. After his presidential term, he became active in humanitarian matters and often worked on those issues with former President Bill Clinton.

Born in New York City, Barbara Bush met George H.W. Bush when he was attending Phillips Academy in Massachusetts, and they got engaged just before George left to serve in World War II. Barbara attended Smith College but ended her studies when George came home for leave, and they married soon after.

Barbara was the matriarch of the large Bush family that included two presidents (her husband and her son George W.) and a governor (her son Jeb) plus four other sons and numerous grandchildren. She is also an author and longstanding champion of the cause of literacy, which she began promoting in the 1980s and which she saw as a fundamental family value. She helped establish the Barbara Bush Foundation for Family Literacy and raised over $110 million for this cause during her life, while also helping the homeless and HIV/AIDS patients.