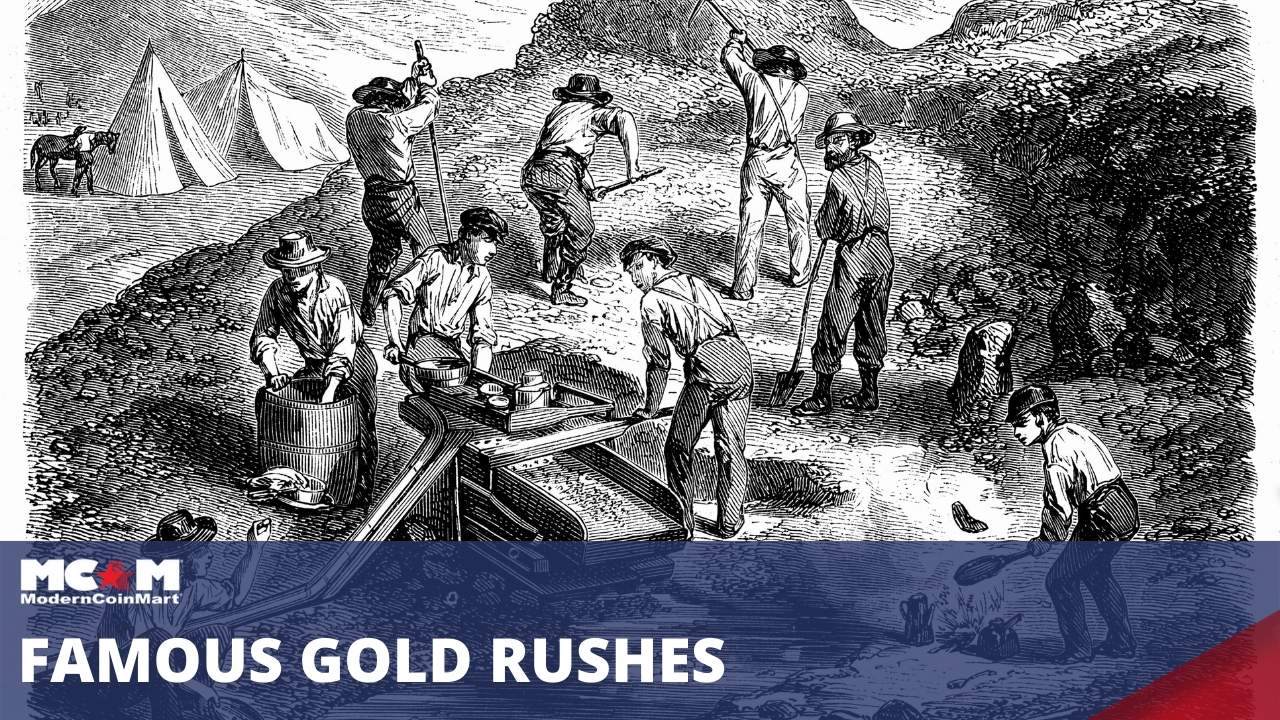 The U.S. Mint will release a clad half dollar, a silver dollar and a $5 gold coin to honor the 100th Anniversary of the founding of the American Legion. Proceeds from the series will help support the ongoing efforts of one of the most celebrated American Institutions ever created.

For thousands of years, people have been enamored with gold, a metal that is typically extremely difficult to obtain in significant quantities. In recent centuries, the discovery of gold, often in undeveloped and ungoverned locations, has brought mass migration of people seeking to get rich overnight. Placer gold, or gold that can be obtained in small quantities with rudimentary instruments, often disappears quickly. Usually, but not always, an increase of interest in the region funds more advanced mining methods and can lead to the development of a local economy. Although there have been instances of gold rushes changing the financial futures of small miners, more often, those who benefit have been traders, like Levi Strauss, and others who supported those working in the area.

One thing is sure, whether positive or negative, the discovery of gold and resulting gold rushes have an undeniable effect upon the region in which they occur. Here are a few examples of famous gold rushes that have taken place throughout history and how they shaped the world.

One of the first modern gold rushes took place in Brazil. The Brazilian gold rush is among the longest-lasting gold rushes in history, lasting more than two centuries. Bandeirantes, a mix of fortune hunters, explorers, and adventurers, first discovered gold in Minas Gerais. The discovery led to an influx of Portuguese and enslaved people to the region.

The discovery was made in the 1690s, and within three decades, half the Brazilian population was living in the area. Slave labor contributed largely to mining efforts, and the British would eventually bring engineering expertise and management to maximize results. So long-lasting has the impact of the discovery been that Minas Gerais, the state in which the discovery was made, is still the second-largest state in the country today.

One of the United States’ most infamous gold rushes started in Georgia in 1829. The yellow metal was discovered in 1828, but differing accounts exist of who made the discovery that led to the rush. Regardless, thousands of prospectors rushed to Georgian counties in which gold was found. Gold had previously been found in the Carolinas, while rumors of it in north Georgia had been around for centuries. Mining was made at least partly possible by the Indian Removal Act of 1830, which led to what is today infamously known as the Trail of Tears. Georgia dispensed with the land in 40-acre tracts through the Gold Lottery of 1832.

For most of the 1830s, gold from Georgia was sent to the Philadelphia Mint to strike coins. The quantities of gold being sent north caused Congress to create the Dahlonega Mint in 1838 so that the discovered gold could be turned into coins for circulation. The mint struck gold coins exclusively in $1, $2.50, $3, and $5 denominations. Dahlonega would remain a branch of the US Mint until 1861 when Confederates seized it.

Perhaps the most famous gold rush of all time took place in California. The California Gold Rush started on January 24, 1848, with James Marshall’s discovery of gold at Sutter’s Mill. The discovery quickly changed the region and the nation. An estimated 300,000 prospectors sought what became known as “the California Dream,” overnight wealth through mining. Meanwhile, merchants selling to the prospectors built businesses that continue today. Perhaps the most famous of these is Levi’s, which made work pants that are today simply known as “jeans.” The influx of people made it possible for California to become a state, while the influx of gold into the US markets stimulated the country’s – and the world’s – economy. Another notable outcome of this Gold Rush was the establishment of the San Francisco Mint in 1854, which turned the gold into currency.

Although there were widespread positive effects of the rush, not everyone benefitted. Native Americans who were living in the region were forced off their lands. They suffered starvation as chemicals, silt, and gravel from prospecting destroyed their lands and killed fish. There were also more direct atrocities, such as the murder of natives.

The Victorian Gold Rush is among those that changed the history of a nation, in this case, Australia. Lasting from 1851 into the 1860s, the period made Melbourne the country’s financial capital and brought tremendous wealth to the colony as well as vast movements of populations. Due to the discovery of gold, the people of Victoria rapidly tripled from 77,000 in 1851 to 237,000 in 1854. The city would have an impressive population of 411,000 by 1857.

In the half-century following the discovery of gold, over 61 million ounces of gold were mined in Victoria. Much of that was exported to Britain and helped pay off the country’s foreign debuts, and also served to fund its economic expansion in the ensuing decades. Today, Australia boasts two of the most renowned mints globally, the Perth Mint and the Royal Australian Mint.

John Henry Davis, a mineralogist from Wales, discovered gold in the South African Republic in 1852. He brought his findings to the President, Andries Pretorius, who had him escorted out of the country because of his fears of what could happen should a gold rush occur. Over the decades that followed, there were other small discoveries and even some mining operations. Then, in 1886, an Australian miner, George Harrison, found gold at Langlaagle. Word spread quickly, and one of history’s most enormous gold rushes began.

The rush changed the course of South African history. The influx of foreigners was so great that South African Paul Kruger became concerned about the possibility of foreigners outnumbering Boers. He took several steps to discourage immigration, and conflicts with the British, who claimed the lands, grew. This tension eventually resulted in the Second Boer War.

During the gold rush, prospectors and miners flocked into Ferreira’s Camp, a small mining village. It took less than a decade for the town to become the biggest city in South Africa. It is still the country’s largest metropolitan area more than a century later.

Participation in any gold rush requires ambition and a willingness to leave behind the comfortable and the familiar. That willingness went to extremes in the late 19th century with the Klondike Gold Rush, which started in 1896 with the discovery of gold by local miners. The “stampede” began the following year and included notable figures like author Jack London and former Washington Governor John McGraw.

Estimates put the number of people who tried to reach the region at 100,000, but only 30,000-40,000 people arrived—those who did so faced perhaps the harshest conditions of any gold rush. Although multiple routes were available, all presented their own challenges. The Canadian government made the journey even more challenging by requiring those heading to the area to bring with them a year’s worth of food, which weighed more than half a ton, in addition to anything else they had to carry. Once there, prospectors faced frigid temperatures, which fell below −58 °F.

All told, fewer than half even of those who arrived became prospectors, and just about 4,000 found gold. Of those, no more than a few hundred people became wealthy from their efforts. The rush ultimately drew to a close in 1899 as the Nome Gold Rush began.