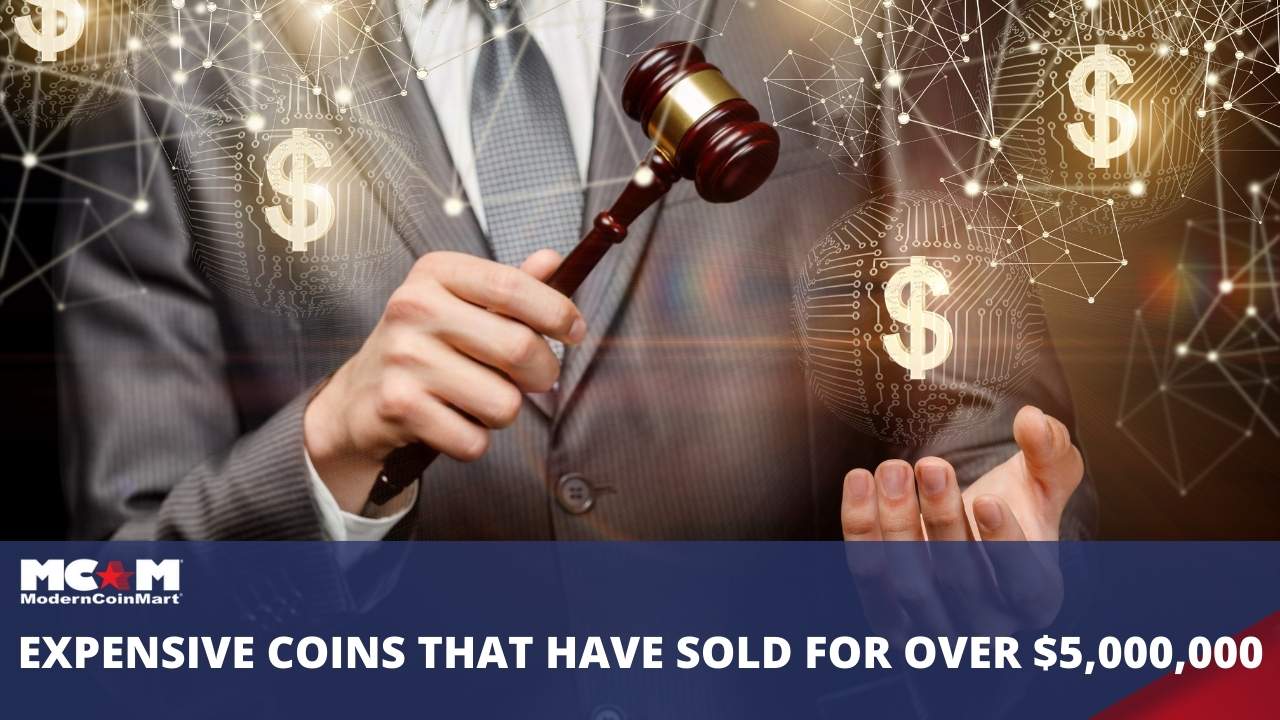 The number of exemplary coins sold – either at auction or in private sales – for more than $1 million has continued to grow over the past 20 years. Within that broader category are the most expensive coins, those which have brought more than $5 million each!

While this list seems to be dominated primarily by U.S. coins, it also includes the most expensive world coins ever sold, including a seldom-seen Islamic gold piece from the 8th century, and one of the most expensive ancient coins sold yet!

Although not the scarcest American coin, (which many experts consider to be the experimental 1849 Double Eagle with only two known examples), the finest example of the 1794 Flowing Hair silver dollar graded PCGS Specimen 66 sold for an incredible amount at auction several years ago.

This coin brought $10,016,875 at a Stack's Bowers Galleries auction on January 22, 2013, when Las Vegas collector Bruce Morelan purchased it. On October 8, that same coin, which is widely considered the first silver dollar ever struck by the U.S. Mint, was offered for sale at an auction held by Legend Rare Coins at an estimated $8-9 million but failed to meet its reserve price. The coin is one of 130 surviving examples from the original 1,758 struck by the United States Mint that were not melted due to poor quality. It is often believed that these coins were made to give as gifts to V.I.P.s to show them that the U.S. Mint was moving forward with the creation of a monetary system based on the dollar.

Five years before the U.S. Mint began operations in 1797, a Philadelphia goldsmith named Ephraim Brasher, George Washington's next-door neighbor, minted the first gold coins ever made in the U.S. Of the seven coins he struck, six had an E.B. punch-mark on the eagle's wing on the reverse, while just one had the punch-mark of the eagle's breast. Although it does not have a face value, it was valued at $15 at the time. The one stamped on the breast sold in December 2011 to a former Wall Street executive for $7.4 million.

The finest graded example of the former type, which is graded NGC MS65*, will be offered in 2021 for a reported asking price of $15 million by Heritage Auctions. It is the centerpiece of the collection of Donald G. Patrick, who purchased it in 1979 for $725,000. Some experts believe this coin will eventually be worth $100 million.

The first coin to ever sell for more than $5 million is one of the surviving examples of the 1933 Saint-Gaudens Double Eagle. That particular coin sold in July 2002 to an anonymous buyer at a Sotheby's Auction for $7,370,000, including the buyer's fee. That coin, which is one of 13 known examples that still exist, is the only one that is legal to own. This example was originally part of the collection of Egyptian King Farouk. The coin was later acquired by a British dealer, Stephen Fenton, who came under the suspicion of the U.S. government since the coin has been illegal to own for many decades. An agreement was reached under which he would not be arrested, and the U.S. government would split the proceeds of the sale of the coin with him.

The other 12 examples include two at the Smithsonian and ten others that were confiscated in 2010 by the U.S. government from the heirs of Israel Switt. All other examples of the coin were reportedly melted in 1933 after President Franklin D. Roosevelt declared it illegal for American citizens to own all but a small quantity of gold.

In 2011, a non-American coin joined the exclusive club of coins that had sold for over $5 million.  A gold Umayyad dinar from 723-724 was sold by Morton and Eden Ltd. for $6,013,156, including the buyer's fee, which at the time made it the second most expensive coin sold at auction. The same coin was sold again by the same firm in October 2019 for $4,780,000. This coin is considered one of the scarcest Islamic gold coins with only a dozen known examples. The coin was struck from gold owned by the caliph Abd al-Malik who was believed to have led a Hajj pilgrimage to Mecca. Experts believe the gold was mined at a site that is northwest of Mecca, which is possibly Damascus, a city now in Syria.

In 1804 the U.S. Mint ceased production of the $10 gold coin, so when President Andrew Jackson wanted to have all the U.S. coins in circulation struck for special proof sets to give as gifts during diplomatic missions in 1834-1835, the Mint combined dies from 1804 with minting technology of the 1830s. Six $10 gold proof coins were reportedly produced for this purpose, of which three are known to exist still. One is on loan to the American Numismatic Association's Money Museum, and two are private hands. In October 2007, in a private sale, an example of this coin fetched $5,000,000. That coin was previously owned by famous collector Col. E.H.R. Green and former Treasury Secretary William H. Woodin.

In 2020 an example graded NGC Proof 65 Ultra Cameo was sold in a private sale for an undisclosed amount by Legend Numismatics for Texas collector Bob R. Simpson.

The 1913 Liberty Head nickel was made without authorization when the U.S. Mint was preparing to produce the Buffalo nickel after minting of the Liberty nickel ended in December 1912. It is believed that the five known examples were struck secretly by Mint clerk Samuel Brown who later became a coin collector. Unlike the 1933 Double Eagle, this coin has never been illegal to own. The five coins continued to change hands as a set until the 1940s, when each coin was sold to individual buyers.

The highest-graded example was previously owned by Baltimore banker Louis Eliasberg and was sold in a private sale in 2007 for $5,000,000 and then again in 2018 for $4,560,000. Then there is the Olsen specimen that was once owned by King Farouk, which sold in 2010 for $3,737,500, and the Walton coin, whose heirs first sold it in 2013 in an auction whose winning bid was placed by Jeff Garret of Mid-American Rare Coin Galleries in partnership with Larry Lee of Coin and Bullion Reserves.

The Walton coin has changed hands a few times, and later sold again in 2018 for between $3-4 million in a private sale. The other two known 1913 Liberty Head Nickels are in museums, including the Norweb coin in the Smithsonian and the McDermott coin which was donated to the ANA museum in 1989.

March 15, 44 B.C. is known as the Ides of March – the day when Marcus Brutus killed Julius Caesar, the emperor of the Roman Republic, and changed history. While participating in this assassination, Brutus said "Sic Semper Tyrannis," Latin for "Thus always to tyrants," which was also said by John Wilkes Booth after murdering President Abraham Lincoln. Afterward, Brutus struck silver and gold coins celebrating his regicide, which are considered among the most important ancient coins. The coin features Brutus on the obverse with two daggers, and a liberty cap (worn by freed slaves) on the reverse.

While 100 silver examples of the EID MAR are known to exist as of publishing, only two gold ones were known until recently when a third was authenticated and graded MS65* by NGC. That third example sold on October 29, 2020 in an auction held by Roma Numismatics Limited, a U.K. firm, equivalent to about $4,188,000.

Alex Fox, “The World’s Most Expensive Coin Is Up for Sale,’ Smithsonian Magazine, September 2, 2020