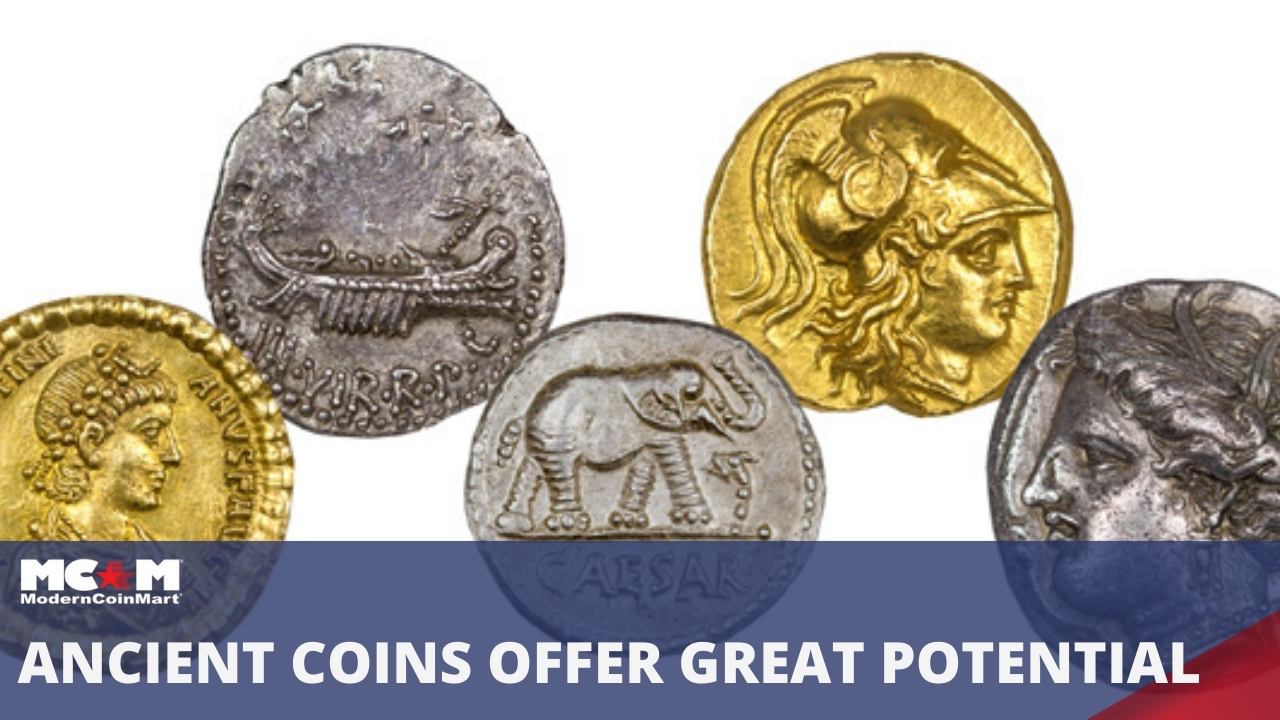 Have you ever been interested in the wide field of numismatics known as "Ancients?" These historically-rich coins range from late issues of the Byzantines Empire to the first coins ever struck. With a ancient coins rapidly growing in popularity, there has never been a better time to add these authentic coins to your collection.

MCM General Manager Andrew Salzberg said in a recent interview that one of the “bright spots” in an otherwise relatively slow coin market is ancient coins. He noted that ancient coins have not received nearly as much attention as they deserve considering how low the population of these coins are, especially compared with modern issues.

In addition, there are tremendous values in ancient coins. For example, one can purchase high-quality ancient coins that are as much as 2,000 years old with populations from a couple hundred to a couple thousand for less than $500, and even for $100-200 in some cases.

Ancient coins are also important historical artifacts of past civilizations. Because each ancient coin was made by hand, each one is a unique piece of numismatic art that is full of history. Some were struck at the time when Jesus Christ was alive, which are known as Biblical coins. One well-known example is the Widow’s Mite, from the Kingdom of Judea. Despite being 2,000 years old, today, the coin is easily accessible and affordable due to the discovery of large coin hoards in recent years.

First, collecting ancient coins requires considerable study and research. Other areas of numismatics, such as modern coins, are easier to collect because information about those coins is so plentiful. In the past, many young collectors avoided the field of ancient coins because of how much was still unknown. However, this should no longer be a deterrent to collectors. Unlike years ago, today’s collectors have access to large amounts of information about ancient coins on the Internet. A simple Google search can instantly reveal what might have taken hours of searching in a library before!

Secondly, third-party grading has boosted the ancient coin field. By purchasing graded ancient coins,collectors are given confidence in the authenticity of their coin purchase. Because counterfeit ancient coins are quite prevalent, having a numismatic expert certify an ancient coin can greatly deter copies. In fact, one of the leading third parties, the Numismatic Guaranty Corporation (NGC) has its own Ancient Coin Division.

Finally, compared to other areas of numismatics that have seen substantial declines, prices for ancient coins have held steady or increased over time. Many popular coins, such as Athenian Owls or Gold Staters of Alexander the Great have skyrocketed in price over recent collector demand. Despite this, common ancient coins like many Roman Silver Denarii still remain extremely affordable.

Why buy ancient coins from ModernCoinMart?

ModernCoinMart (MCM) carries a diverse selection of coins from ancient Greece and Rome, which form the bedrock of ancient numismatics. All coins have been graded by the ancient coin division of the NGC, the world leader in ancient coin grading. Ancient coins graded by NGC use descriptive terms such as “Very Fine” or “About Uncirculated” to describe the state of each coin. Many of the coins MCM carries will have additional information provided by NGC. This is a five-point scale for strike and surface, i.e., a coin might grade 4/5 on strike and 3/5 on surface, as well as taking the precise gram weight into consideration.

First minted in 211 BC during the Second Punic war, the Silver Denarius was the most common Roman coin in circulation. MCM offers a wide range of Silver Denarius inventory, making it the perfect place to begin your collection. The term “Denarius” originates from its Latin meaning, “containing ten” since coins of this type were worth 10 Asses (a smaller bronze coin) in Roman times. Over time, the Denarii were debased (their silver content was reduced) until eventually they were replaced with the Antoninianus, or “Double Denarius.”

Greek coins, which are also offered by MCM, had a number of different denominations used by the different City-States. The most common among these were the Stater, the Drachm and their various fractional and multiple versions. These coins were issued by the various Greek City-States, and their designs would often feature their patron gods or scenes that were emblematic of the City-State.

Larger denominations of the Silver Drachm like the Tetradrachm (4 Drachm) and the Silver and Gold Staters are amazing works of numismatic art. Their very high levels of relief and artistry inspired Augustus Saint Gaudens in his quest to fulfill the goal set by President Theodore Roosevelt to create American gold coins as beautiful as those of ancient Greece.

MCM also carries other ancient coins, including biblical coins, Byzantine coins, and coins from other civilizations of the ancient world. Be sure to check back often and sign up to be notified for special offers since MCM’s selection of ancient coins changes all the time.

Since knowledge plays such a key role in collecting ancient coins, it is important to arm yourself with as much information as you can. There are many ways to do this, but a good start would be to purchase a book that provides an introduction or overview on ancient coins and how to identify them and then once you know more, you may want more specialized volumes about specific areas, or to be inspired by the world-class coins in the book, 100 Greatest Ancient Coins.

Another way to stay informed is to join an organization that focuses on ancient coins such as the American Numismatic Society, the Ancient Numismatic Society of Washington, DC, and the American Numismatic Association (whose 125-year old magazine, The Numismatist, covers ancient coins as do other hobby periodicals such as Coin World and websites like CoinWeek.com). You can also attend coin shows, especially major ones if you can. This is a great way to be exposed to many ancient coins, in a location where you can ask questions to other collectors and dealers.

Studying ancient coins and the history behind them will help you become knowledgeable about the coins you are purchasing. You can better accumulate collections and know exactly which coins you want to spend your hard-earned money on. In addition to this,studying and collecting ancient coins can be very enjoyable!