An Exploration of the History of U.S Presidents in Numismatics 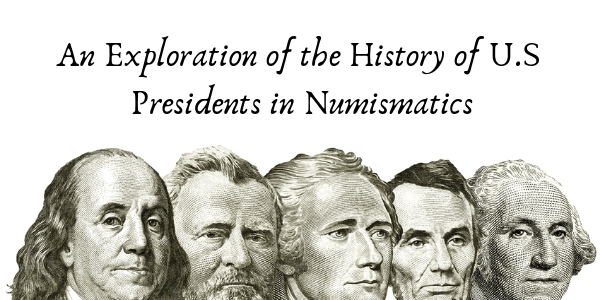 There are three different places where a discussion of presidents and U.S. coinage could start: with George Washington and Lady Liberty, with Thomas Jefferson and William McKinley or with Abraham Lincoln. As we will see, a lot depends on what “circulating” means and what a “commemorative” is, and deciding what actually counts!

Any discussion of presidents on coins needs to start at the beginning with President George Washington and Lady Liberty. The Mint Act of 1792 codifies that “…there shall be the following devices and legends, namely: upon one side of each of the said coins there shall be an impression emblematic of liberty…”

The Goddess Liberty was chosen as a subject for the nation’s coinage when George Washington declined the honor of having his likeness on coins. He felt that an allegorical representation of Liberty was more emblematic of the American Ideal, the notion that anyone could rise to lead, rather than adopting a more European approach where rulers were featured on coinage.

We started having Presidents on circulating coins with Abraham Lincoln in 1909….

The catch here is the word “circulating.”

Any discussion of U.S. Presidents on U.S. coinage needs to include Honest Abe Lincoln, the man who would become the 16th President of the United States. Lincoln was born in 1809 and to celebrate the 100th Anniversary of his birth, the U.S. Mint planned to issue a commemorative cent intended for a single year of issue. The coin became a numismatic legend that is still circulated today and is one of the most widely collected series in American coinage. The reverse has been modified from the popular and original “Wheat back,” to the Lincoln Memorial reverse, to the current shield reverse. 2009 saw a one-year, four-coin commemorative series featuring reverses highlighting different times in the life of Lincoln.

Interestingly, the Washington quarter was the next coin that featured the portrait of a U.S. President, this time to celebrate the 200th Anniversary of his birth in 1932. This coin was intended to be a commemorative issue, but was so popular, that it was adopted for circulation, just like the Lincoln cent, and replaced the Standing Liberty Quarter in circulation. The obverse design remains in circulation today and also appears on the America the Beautiful Quarters program. The original reverse was just a depiction of the American Bald Eagle and didn’t have anything specifically to do with Washington’s life, but Eagles are a legislated presence.

Washington was used as the first subject in the first issue of the U.S. Mint’s Modern Commemorative program in 1982.

The first appearance of a president on U.S coinage was actually on the Lafayette Dollar in 1900. This coin features French General Lafayette who helped to fight the British in the American Revolutionary War. He even was given command of Continental Army troops. Right next to him is exactly the guy who didn’t want to be on a U.S. coin in the first place, President George Washington. This was the first-ever commemorative silver dollar issue ever struck by the United States and featured the First President. The proceeds from the premium were used to gift the people of France a statue of General Lafayette.

The next appearance of a U.S. President on a U.S. coin was on a gold $1 coin issued to commemorate the 100th Anniversary of the Louisiana Purchase in 1903. Except there were TWO separate dollar issues, one bearing the portrait of Thomas Jefferson, who was the architect of the Louisiana Purchase, and the other bearing the portrait of William McKinley, who had nothing to do with it.

Incidentally, President McKinley was assassinated in 1901 which somehow led to him being honored on this commemorative gold dollar. Clear as mud, right? To further make this interesting, President McKinley was the subject of an additional gold $1 issue in 1916 and 1917 designed to help fund his memorial in Ohio. (Pro tip: the 1917 issue is the lower mintage). This honoring of the recently deceased becomes an important precedent later in the 20th Century. These gold dollars never circulated and were sold by the Mint at a premium.

But the legislation making this official wasn’t passed until 2006. The fact of the matter is that some recently deceased presidents, namely John F. Kennedy and Franklin Delano Roosevelt, have appeared on coins relatively quickly after their deaths.

After the death of Franklin Delano Roosevelt, the only president to be elected more than the customary two terms, the beloved Mercury dime was replaced with the long-running Roosevelt dime. President Roosevelt founded the National Foundation for Infantile Paralysis to combat polio. This organization later became known as the March of Dimes, so it seemed fitting to honor him on the Nation’s 10 cent coin. This coin is the longest-running, single unchanged design in the history of the U.S. The Lincoln cent obverse has circulated since 1909 but has had three separate reverses.

Of course, we need to mention that the Kennedy Half Dollar was rushed into production within mere weeks of John F. Kennedy’s assassination. This widely collected series remains in production today, although is not circulated often. It has not changed since the 1964 design was introduced, featuring the Gilroy Roberts portrait of the President and the Frank Gasparro-designed Heraldic Eagle reverse. The 1964 Kennedy Half became one of the most widely “saved as a souvenir” coins ever issued by the U.S. Mint.

Now, this will blow your mind: This tradition of not issuing coinage featuring a living president had been broken with the 1926 Sesquicentennial Half Dollar coin. Created to commemorate the 150th anniversary since America declared her independence. It features George Washington, and President Calvin Coolidge, who was alive and in office, in 1926 when he appeared on the coin.

The final circulating coin series that bears the likeness of a U.S. President, is the Eisenhower Dollar coin. The coin features the portrait of President (and General) “Ike” Eisenhower on the obverse, and the Apollo 11 mission badge on the reverse. It is avidly collected by specialists due to interesting die varieties as well as its copper and silver strikes. Its relatively short run makes a complete date and mint set with significant die varieties in high grade seem less daunting.

BUT WAIT, the tradition continues. From 2007 until 2016, the U.S. Mint struck the Presidential Dollar series. This series honors every deceased President of the United States until 2016. The series was struck in large numbers at first, and mintage numbers diminished as the series wore on. Collectors have enormous amounts of variety here, with different finishes and error coins with incused rim lettering missing. The U.S Mint also issued Medals, which do not carry face value, which honor our former presidents.

What are the rules impacting Presidents appearing U.S. Coinage?

As previously stated, according to the legislation impacting the $1 Presidential Coin series, a subject must be deceased for at least two years prior to the issuance of a coin. In another interesting twist of tradition, President Reagan pre-deceased his wife Nancy, and although this could have made her ineligible for the First Spouse gold series, a companion series to the Presidential dollars, it was decided to proceed with the issue for her. Mrs. Reagan died in early 2016, the year her First Spouse issue was released. The series skipped former Presidents Jimmy Carter, George H.W. Bush, and Bill Clinton, as they and their wives were still alive in 2016.

Who is responsible for the designs on U.S. Coinage?

The designs are reviewed by the Mint, (and by extension the Director of the Mint who answers to the Secretary of the Treasury), the Citizens Commemorative Coin Advisory Committee, and the Commission of Fine Arts. Ultimately, there may be additional approvals required for some issues, like state quarters, but the potential designs are then sent to the Secretary of the Treasury for a final review and approval. The Director of the U.S. Mint is appointed by the President and approved by the Senate.

How have Presidents impacted the history of U.S. Coinage?

Other Presidents, notably President Lyndon Johnson, allowed for the change of the composition of some U.S. coinage from the former 90% silver dimes, quarters, halves, and dollars to the cupro-nickel coinage we have for those denominations today.

As a group, they have appointed U.S. Mint Directors, who as part of their duties, help in the design selection process and on through overseeing the production of the coins themselves.