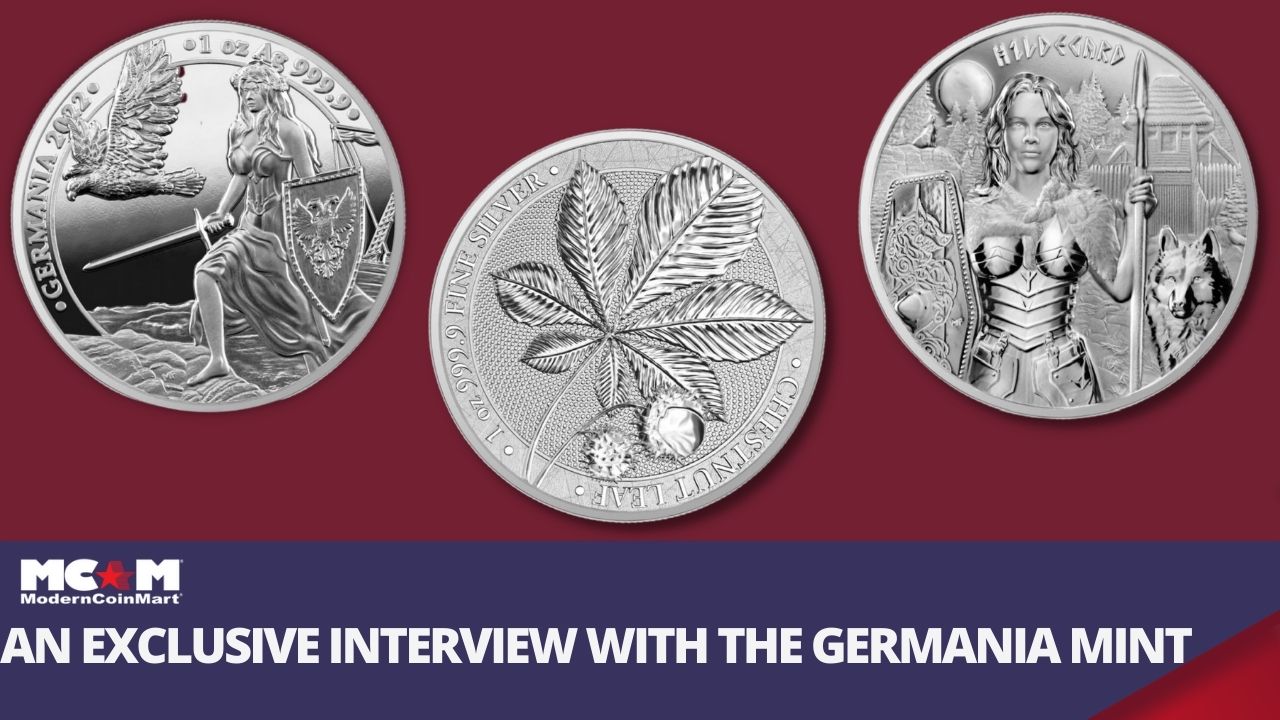 The Germania Mint’s beautiful collector and bullion coins and medals, as well as cast silver bars, have become a big hit with collectors and silver investors over the past four years. The Germania Mint is a private mint based in Poland whose whole product range is built around the concept of Germania, which is both a mythical land developed by 19th-century poets and writers and also refers to the actual land east of the Danube River, as first termed by Roman emperor Julius Caesar.

The Germania series features allegorical images of a female warrior goddess who represents Germania. The obverse of the series changes each year. Recently the series has shown Germania on a voyage to another land, which she reaches on the latest release for 2022. The same reverse with a double-headed eagle inspired by Roman mythology is used on each year’s medals. That reverse design is intended to represent the moral principles and noble values of this historic land of Germania.

The second ongoing series from the Germania Mint is the Allegories series, which began in 2019, and pairs Germania with female personifications of other nations, including so far Britannia, Columbia, Italia, and Austria. The series is issued in various sizes, with the 1 and 2 oz versions currently in stock at ModernCoinMart.

Then there is the Mythical Forest series that started with the Oak Leaf in 2019 and then the Chestnut Leaf in 2021, but ModernCoinMart only has the Chestnut rounds available now.

The Germania Mint also produces the Knights of the Past series that began in late 2021 with a 5-euro legal tender coin depicting the legendary Maltese Knights issued in cooperation with the Bank of Malta and the recently debuted Valkyries series that features female warriors inspired by Nordic mythology. The first release is Hildegard for 2022.

The Germania Mint also strikes other non-denominated series focused on mythical beasts and coins issued in cooperation with other mints like the 2021 Impact Moments Meteorite coin and 2021 Notre Dame coin minted for Niue.

Finally, there are the Germania Mint Cast Silver Bars. Each one has an obverse inscribed with the double-headed eagle logo, the weight, fineness, and a unique serial number, while the reverse has a hologram for added security. In addition, each bar is registered in a database that can be used to verify its origins. ModernCoinMart currently has 100, 250, and 500-gram, as well as 1 kilo cast silver bars available for purchase!

For more information about the Germania Mint, I contacted a top official there who provided fascinating insights into how the mint came about, how it creates its unique products, and forthcoming plans.

Interview with Filip Nagalewski, Head of Marketing for the Germania Mint

Louis Golino – “What made you decide to call your mint the Germania Mint”?

Filip Nagalewski- “Originally, a few years ago, when thinking about the idea for a coin, we were looking for something that was both fresh in the numismatic world and that we could identify with.... Germania is a real mythical land that spanned the north and east of the Roman empire. Slavic tribes were among those who inhabited the area (including Poles), so aside from the commercial success of Germania Mint, we personally empathize with the brand itself - regardless of the "German" connotations of the name.”

LG - “What sets Germania Mint apart from other private mints?”

FN – “By creating the Germania Mint brand in 2018, we decided to start creating our own ideas - without restrictions from any side and against the prevailing dictate that something can and something cannot be done. Respecting the achievements of the whole industry and constantly learning from more experienced companies, we started working on products according to our own vision. We did not want to create more versions of already exploited themes, nor on the basis of licenses that anyone can buy. Of course, we do not exclude various realizations in the future, as Partner Issues are our priority, but the essence of our brand will always be innovation - both in terms of storytelling, design and production. In turn, our constant openness to the numismatic community and humble listening to their feedback is what sets us apart from others. All of this has allowed us to create some of the most groundbreaking collectible products of recent years, basically from scratch.”

LG – “Are you able to reveal anything about the amazing artists who design and engrave your coins? Even if it's not possible to give their names, as I suspect, can you tell us where they come from and what background they have?”

FN – “Building teams and project management at Germania Mint also looks different from other companies. Our head artists - Natalia Danysz (Germania, Allegories, Beasts, Warriors) and Mateusz Frąckowiak (Germania, Allegories, Knights of the Past, Valkyries), together with their teams, are not only in charge of designs, but are directly engaged in projects from the idea phase, through implementation, to the creation of the entire collector experience. Both have been involved with the brand since its inception, although they honed their graphic skills much earlier as part of their work at Kurowski Group - a company with many years of experience in numismatics, which rebranded in 2021 into Germania Mint. Today we create interdisciplinary teams that bring together people with different talents, artistic sensibilities and technical knowledge. That is why it is only through collaboration and continued work in this thriving industry, that we have been able to achieve so much in just a few years, and we do not plan to stop.”

LG – “And do they use digital technologies in their work or only the traditional manual methods such as for sculpting?”

FN – “The whole Germania Mint design and project management field is working basically entirely digitally. While we are respectful of traditional methods of coinage, we try to be innovative in this aspect as well. We function constantly online, so that the real-time exchange of thoughts, opinions and comments within our team, allows us to make immediate changes, corrections and modifications, so that we perfect the products sometimes to unimaginable limits.”

LG – “Is the allegories series over? Can you say anything about your upcoming plans other than the new Fenrir beast coin?”

FN – “This year’s Allegories: Polonia & Germania is the penultimate coin, and it will be issued in the next weeks. In addition to it and Fenrir, by the end of the year we plan to issue the second coin from the Knights of the Past series and Linden Leaf from the Mythical Forest series. In 2023 on the other hand, we will see not only new releases of coins from our well-known collections, but also brand new series and collaborations, that we hope will pleasantly surprise our Fans.”

LG – “Can you tell me about your customers in terms of where they are from, i.e., what percent from the US, Europe, Asia and which countries have the most buyers of your products?”

FN – “We can reveal that most of our fans come from the US, followed by Germany, UK, Canada, Australia and several other markets. However, we are constantly building our Distributor network, so that Collectors may enjoy our work anywhere.”