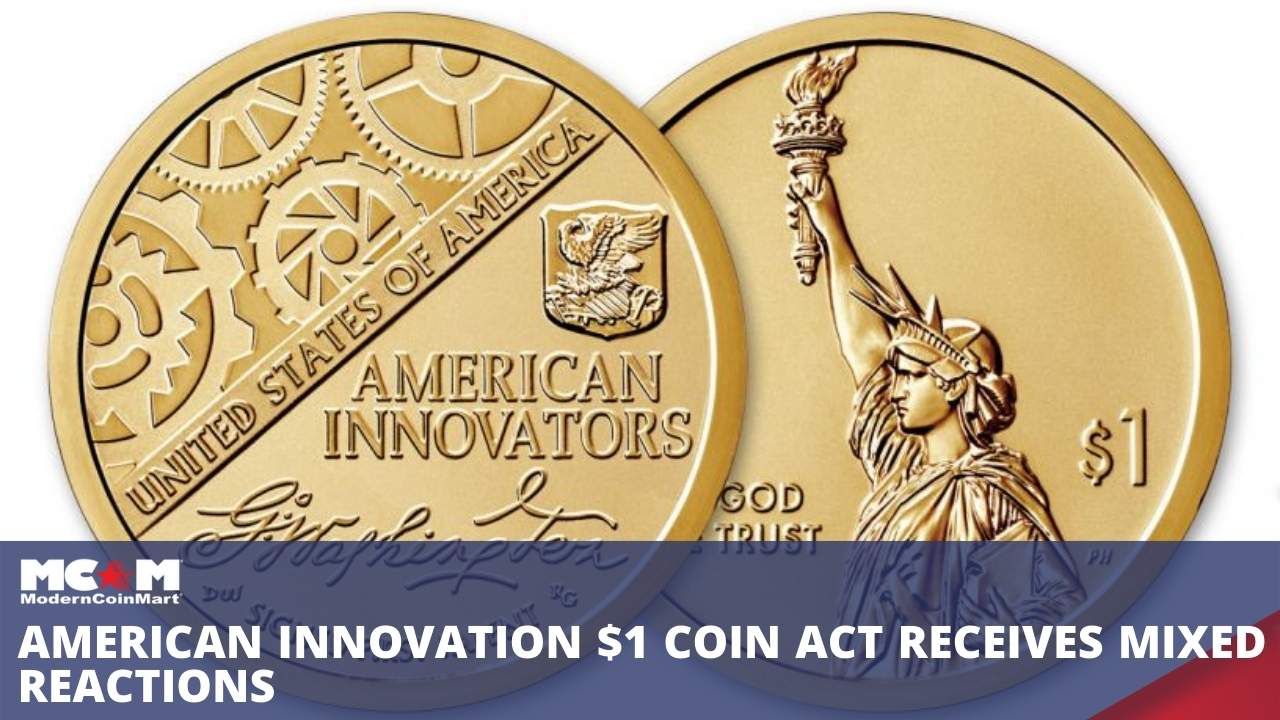 Collectors have greeted a proposed series of $1 coins commemorating American Innovations from the U.S. Mint with a somewhat mixed reaction. Find out more, as we discuss what happened to $1 coins, what exactly the proposed $1 coins are, and why the reaction to the act has been mixed.

A History of $1 Coins

Modern $1 coins have had a troubled history in the U.S. as far as getting the public to use them. Their much lighter and easier to carry counterpart, the $1 note, and gradual inflation has been a major cause to its disuse. As you probably know, it is simply inconvenient to carry around coins of this value when you could simply slip some $1 notes into your wallet. With current $1 issues struck out of brass-clad copper planchets, the lack of intrinsic value certainly doesn’t help matters.

The underuse caused most of these dollar coins to be put into storage, where new issues piled up in storage facilities at considerable cost to the taxpayer! This is why on December 2011, the Obama administration finally halted production of the $1 coin for circulation. Currently, only those issued for collectors and those sold in bags, rolls, or sets and sold at a premium are still minted.

That raises the other issue with modern dollar coins, which is that many are still popular among collectors. This is particularly true with the Eisenhower dollars (1971-1978), and more recently, the Native American “Sacagawea” dollars (2000-present). Even the Presidential dollars that some collectors described as having mediocre portraits of the presidents are collected today by many people. The series popularity has been bolstered even further by various error coins, special reverse proof issues, releases showing more recent presidents, and other developments.

On September 14, 2016, Rep. Jim Himes (D- CT) introduced a bill (H.R. 6025), the American Innovation $1 Coin Act. This act proposes a 14-year series of dollars issued for collectors to begin in 2017 that would honor “American innovation and significant innovation and pioneering efforts of individuals or groups from each of the 50 States, the District of Columbia, and U.S. territories to promote the importance of innovation.”

In addition, the motto, “IN GOD WE TRUST,” would be moved from the edge to the obverse, while the date and “E PLURIBUS UNUM” would be struck incuse on the edge, as they were on the Presidential dollar coins. The fact that “IN GOD WE TRUST” appeared on the edge on those coins was controversial for some people who believed it deserves more prominence.

If the legislation becomes law, the innovation coins would be issued in the alphabetical order of the states with four new issues each year.  The obverse of the coins would include an image symbolic of Liberty, while the reverses would depict: “significant innovation, an innovator or pioneer, or a group of innovators or pioneers.” The coins would be issued concurrently with the Native American dollars minted for collectors. If the program did not begin by 2017, then additional Presidential dollars would be minted until the innovation program begins.

The text of the bill does not deal with the matter of metal composition, but the coins would presumably be bimetal (.770% copper with the rest made of manganese, zinc, and nickel) like the Native American and Presidential dollar coins.

The bill so far has only 9 co-sponsors and is awaiting action in the House Financial Service Committee. It would need to pass both chambers (the House and Senate) and be signed into law by the President. This legislation is clearly a long way from ever becoming an actual U.S. Mint program, and the prospects of it getting very far during an election year, or during the first year of a new administration, are not very encouraging. The next Congress will likely have many more pressing issues to deal with. You can actively view the progress of the act on congress.gov.

The proposed program, if passed, would be a good way to highlight American achievements in science, technology, and other fields; however, many collectors are weary of coin series that run for many years. After series like the State Quarters, the Presidential Dollars, the First Spouse $10 Gold Coins, and the America the Beautiful Quarters, many say they need a break from such series.

The majority of reactions to the proposed Innovation $1 Coins from collectors and numismatic commentators have not been very positive. My own suggestion in Coin World on September 14 was one of the few somewhat positive articles on the program. I suggested that it would work better as a circulating and numismatic quarter program, since Americans do spend and circulate quarters regularly.

For the program to be a success, it would need widespread support from collectors, as the coins are not being struck for circulation, and only collectors will be purchasing these $1 coins from the U.S. Mint. Unfortunately, comments from collectors on various coin forums in the weeks since the legislation was proposed and covered in the numismatic media have been strongly negative.

There are some collectors who like the idea and think it would be educational. Those individuals also tend to think the series would work better as circulating coins, as it would reach a broad range of people. Along with this group, a considerable amount of the opposition from collectors assumes the coins would be a circulating program, which is, of course, not the case. Those who do understand it is strictly a numismatic program tend to be more receptive to the idea.

Few collectors seem to focus on the fact that the obverses would depict images of Liberty, which if done right, would certainly be appealing from an artistic perspective. Liberty is long overdue for a return to non-precious metal coins. All things considered, it appears that most collectors feel the current Native American dollar series, which has featured designs that typically receive a lot of acclaim, is sufficient to satisfy the interest of collectors in modern bimetal dollars.