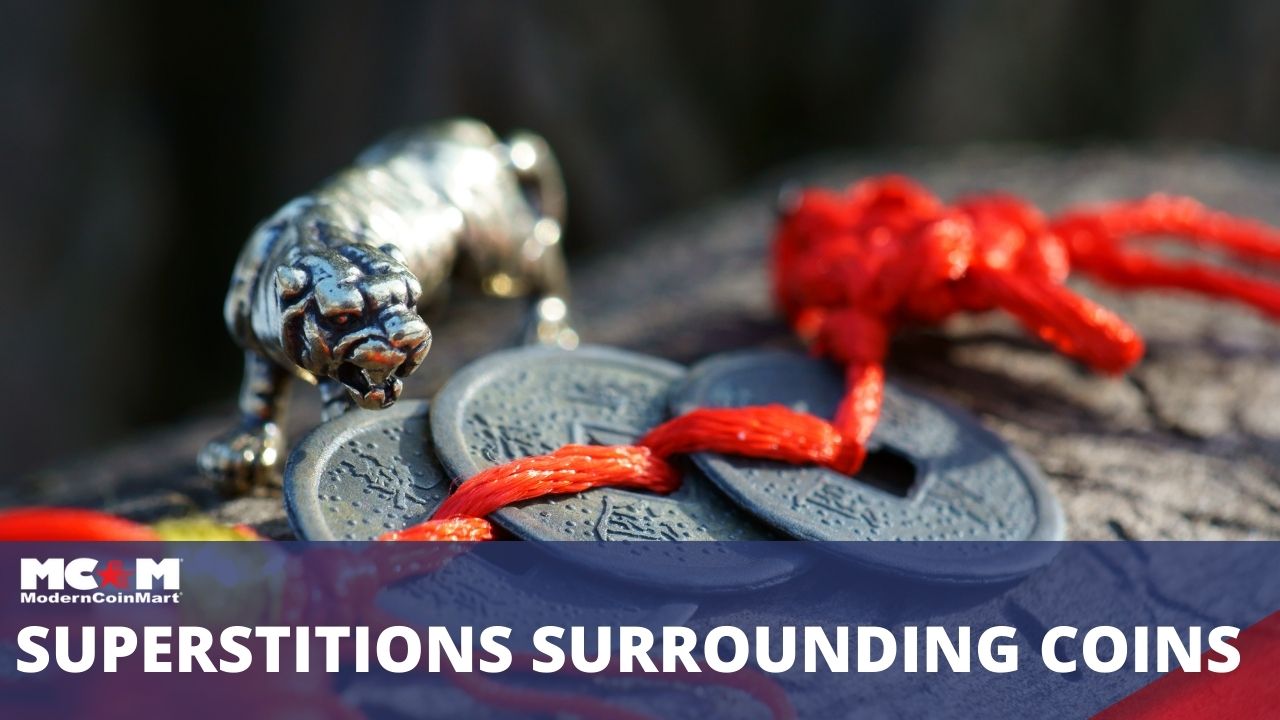 Superstitions are prevalent across many cultures, and some of the largest involve coins and money. Read some of the most popular superstitious practice regarding coins around the world.

Superstitions abound in everyday life.  Some people are petrified of seeing a black cat cross their way, many buildings don’t have thirteenth floors and it’s not uncommon to see people throw a little salt over their left shoulders at mealtimes. Some of the biggest superstitions, though, involve money, and coins are right at the center of many of them. Here are just a few of the ones that are popular in different parts of the world.

One of the oldest known superstitions is that of placing a coin in or on the mouth of a deceased person before their burial. The term for this is “Charon’s obol,” as the ancient practice specified that an obol, a Greek measure of weight and currency, had to be used. In ancient Greek mythology, Charon was the ferryman who took souls across the River Styx, which separated the world of the living from the world of the dead. The coins were meant to be used as payment, or, as some described them, bribes, to be given to Charon.

Another of the most prevalent coin-related superstitions also originated in Greece, though it has since spread far and wide. Specifically, Greeks believe that people should always have a coin in their possession. Everything that is used to keep money – bank accounts, pockets, wallets, and purses – should always have something, even if only a single coin, in them. In fact, when people give purses or wallets as gifts, they always place at least one coin in them, which is supposed to be kept there so that it will never be empty.

China is another ancient culture in which superstitions are extremely prevalent. In fact, the Chinese even have what are called “lucky coins.” These look ancient and have square holes in the middle, which was common among ancient coins to enable people to carry them on strings. Many believe that a red ribbon tied to the coins activates their power and that the best ones are tied with an eternal knot, one of the Eight Auspicious Symbols. Many people even today put three coins tied together by a red ribbon on important documents. Others fasten them to gifts, which is believed to give double the happiness to the recipients. Practitioners of feng shui also adorn the southeast corners of their homes with money to ensure financial well-being.

Not to be outdone, the ancient Romans had their own superstitions associated with money, though they also adopted Charon’s obol. One that originated in Rome was the ceremony known as “The Touching,” in which Emperor Vespasian handed out coins to people who were ill in a ceremony. It was believed that coins touched by leaders had healing powers because the leaders who touched them had authority from the gods. This practice survived well into European history, albeit with monotheistic bent, with touching ceremonies practiced by French and English royalty until 1714.

Perhaps the most famous superstition surrounding coins remains alive and well in Rome. There, over $1.2 million in coins are tossed into Trevi Fountain every year. People toss the coins into the fountain over their left shoulders, wishing for a quick return to Rome. These coins don’t only bring luck to those who toss them, though. They are collected by Caritas, a Catholic charity that provides food and social programs for the needy around the world. Although Trevi is the most famous fountain, the practice of tossing coins into fountains and having those coins go to charitable causes is common throughout the world.

While the English no longer carry on that tradition, another one continues to this day in many of the country’s households. Christmas pudding is a traditional dish at Christmas, though it has evolved over time. A coin would be placed in the pudding during its preparation. It is believed to bring a prosperous new year to the person who gets it in their serving.

End of the year superstitions for bringing wealth in the new year are not limited to the English. Belgians and Polish have ones of their own. On New Years Eve, Belgians wishing to bring luck for the new year place a single coin under their plates. A bit earlier in the month, Poles wash their faces with coins on Dec. 23 to ensure prosperity throughout the new year.

In some parts of the world, including Argentina, a single coin can save a relationship, according to many locals. Knives as gifts are believed to be bad luck, especially for weddings, as they are believed to sever relationships. Especially for those who know people who love to cook, this can be a problem. Fortunately, though, the recipient can give a coin as small as a penny to render the transaction an exchange rather than a gift, thus saving the relationship.

Coins on the ground can be especially tricky, as superstitions vary from one part of the world to another. In many places, the decision on whether to pick up a coin depends on which side is facing up. If the coin is heads up (obverse for collectors), the coin will bring good luck. If the tails side (reverse) is showing, then it is best to leave the coin undisturbed. This is not the case in Thailand, though, where the locals always pick up the coin and declare it “a lucky baht.” Thais believe that doing anything else offends money and drives it away.

Coins have been central to countless superstitions around the world for millennia, perhaps in part because they are as durable as superstitions. Just about everybody follows at least one coin-related superstition, whether they do so religiously or just for fun. When is the last time you heard of someone going to Rome and not tossing a coin into Trevi Fountain?