The History of U.S. Coinage

The history of American coinage mirrors and reflects the history of the American nation and its people. ModernCoinMart is proud to offer a vast selection of U.S. coins from colonial to modern times.

Prior to the establishment of the United States Mint in 1792, foreign coins such as the Spanish-American pieces of eight circulated in the American colonies. And individual states also issued their own coinage.

Then in 1792 a law was passed by the young American Congress which said that a new American currency unit would be established based on the pieces of eight but called by an old name, the dollar, and it would be divided decimally into dimes and cents.

The Establishment of the United States Mint and the First U.S. Coins

That same year Congress passed a law called the Mint Act of 1792 that implemented the decimal concept and called for the establishment of a United States mint in the capital of the time, Philadelphia. The legislation also determined what designs would appear on American coins.

At the time there was a lot of support for putting an image of the new president, George Washington, on our coins, but Washington objected, saying that any portrait on a coin would be monarchical and that our coinage had to reflect the founding principle of the new republic, that it was ruled by the people.

The Mint Act stipulated that one side (the obverse) of each coin had to have “an impression emblematic of liberty” and an inscription to that effect, while the other side (the reverse) would incorporate the national bird, the eagle, for silver and gold coins, while copper coin reverses would indicate their denomination.

On July 13, 1792 the first new coin issued by the new republic, a silver half dime, was struck, and in October of 1794 the first silver half dollars and then silver dollars (the flowing hair type designed by Robert Scott) were issued.

In 1793 the first copper coins were issued, which included cents and half cents.

In 1795 the first gold coins were struck, which included eagles and half eagles also designed by Robert Scott. In 1796 a gold quarter eagle followed.

By this time the mint was experiencing a shortage of the metals needed to issue coins with little domestic sources of silver, gold, or copper at the time. Between 1796 and 1837 Cornish and Welsh copper was being used to produce planchets for copper coins after the mint turned to Great Britain for help.

By 1837 domestic sources of copper and gold were discovered. Just before that in 1835, legislation was passed creating three new mint branches in Charlotte, North Carolina, Dahlonega, Georgia, and New Orleans, Louisiana, which were located near the mines that supplied the metals.

During the Civil War coins were hoarded and went into hiding, and the American people turned to paper currency. 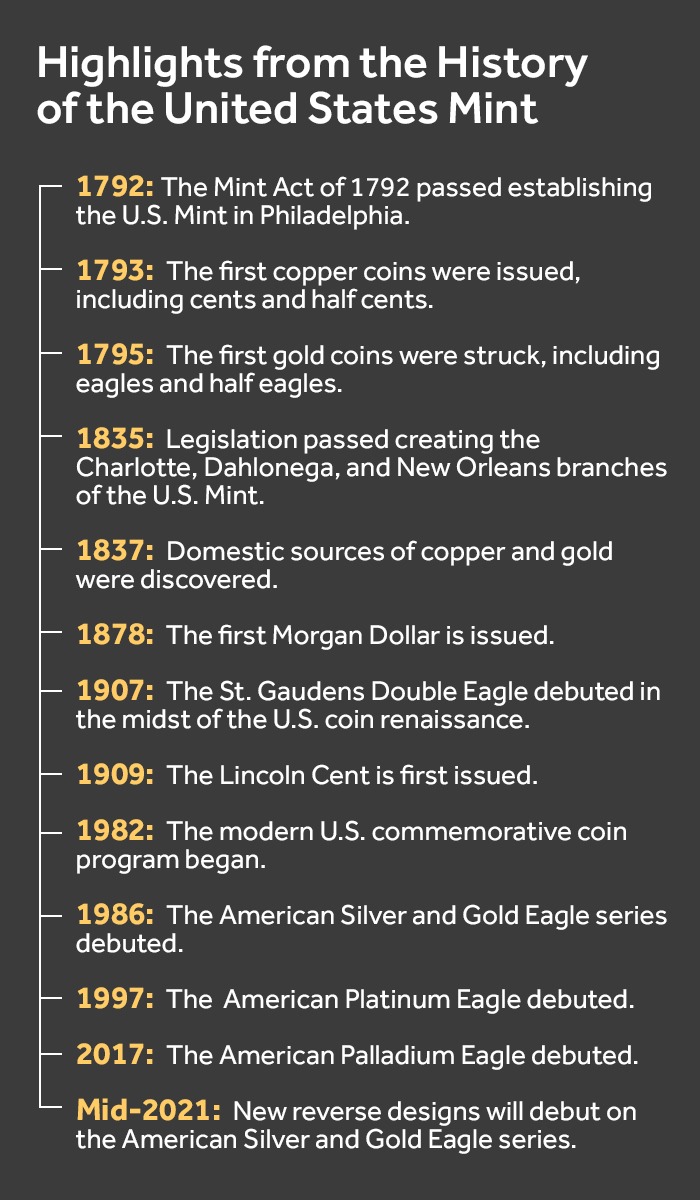 From the start of the U.S. Mint until 1947 circulating coinage designs continued to be dominated by the presence of Lady Liberty on their obverses, and an American eagle on their reverses. The way Liberty appeared on those coins varied a lot in terms of dress, hairstyle, pose, and to a lesser degree, in terms of ethnicity or race. In almost all cases she appeared on these coins as a Caucasian woman of European origin and later on some coins as a Native American woman or man. 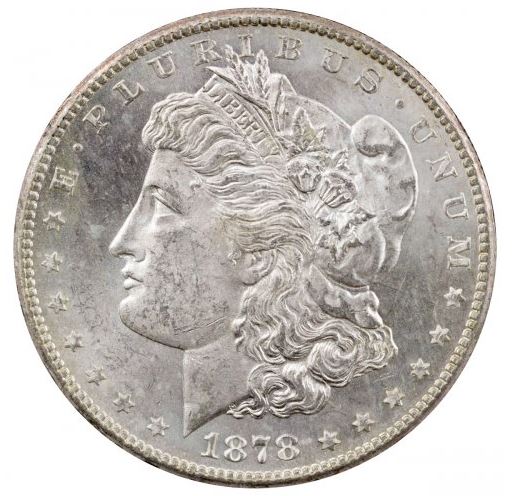 Lady Liberty is an allegorical representation of the idea of freedom as a female. Sometimes she appears as a young woman, especially on earlier coins, and later as an older woman, who could be a matron or schoolteacher.

In fact, the most famous American coin, the Morgan dollar, features an image of Liberty on its obverse that was based on a model who was a schoolteacher. For more information about the Morgan Dollar and how to collect it, read this Info-Vault article here.

In the late 19th century a powerful lobby representing the interests of the silver mining industry convinced the Congress to begin striking Morgan dollars in 1878 and until 1904 and then again in 1921 in quantities that far exceeded what was needed for commerce. That is why to this day there are so many Morgan dollars in the marketplace, even in high states of preservation, and even despite the mass meltings in the 20th century. 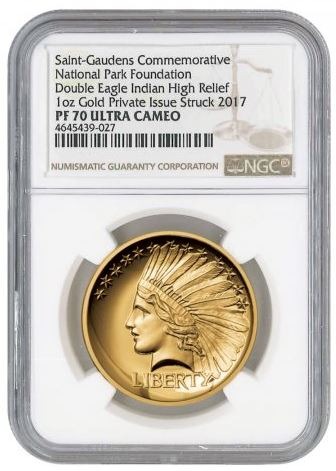 In the early 20th century, after a long period during the industrial era when our coin designs remained static and not terribly inspired, a renaissance in American coins began at the behest of President Theodore Roosevelt.

Roosevelt worked with American sculptor Augustus Saint-Gaudens to create what is still considered the most beautiful American coin: the $20 gold Saint-Gaudens double eagle.

Two other famous sculptors, James Earle Fraser and Adolph Weinman, created respectively the Buffalo or Indian Head nickel and the Walking Liberty half dollar, classic American icons of numismatics during this period.

Roosevelt’s successor, William Howard Taft, continued the process of redesigning our coinage, most notably the issuance of a coin in 1909 to mark the centennial of the birth of President Abraham Lincoln.  This marked the start of what some call the period of “hero worship” and others refer to as “the dead presidents,” which continues to dominate modern circulating coins today with obverses that depict former presidents, which have been in use for many decades.

The United States Mint in the Modern Period

The two most important developments in the modern period of U.S. coinage are first the revival of commemorative coinage in 1982 with the issuance of the George Washington silver half dollar after a long hiatus following the end the classic period of commemoratives in 1955.

The second is the introduction in 1986 of the American Eagle bullion coin program with the issuance of Silver Eagles and Gold Eagles in mint state and Proof versions. Over the past three decades the program has been expanded to include various versions of these coins aimed at collectors that feature different finishes and in 1997 the launch of the American Platinum Eagle program.

Then in 2017 the mint launched the American Palladium Eagle, issued only as a bullion coin that year, and has featured a new finish every year it has been issued since.

Another key trend of the modern period was the release in 2017 of the first American coin to feature a truly modern representation of Liberty – one in which she appears as a young African-American woman on the 2017-W $100 American Liberty High Relief gold coin and silver medals plus the 1/10th-oz $10 Proof version of the gold coin.

In recent years, the United States Mint has continued to innovate and thrill collectors with both first-ever issues and low mintage releases. In 2019, the United States Mint began issuing select business strike quarters into circulation that feature the "W" Mint mark of the West Point Mint, which sent collectors searching through their pocket change hoping to find one. This tradition continued in 2021 with W mint marked quarters that also bore a V75 privy mark to mark the 75th anniversary of the end of allied involvement in World War II, marking the first time a U.S. quarter bore a privy mark.

In November of 2020, the United States Mint released the first-ever Silver and Gold American Eagle to feature a privy mark, bearing the same V75 privy, as the 2020-W quarters. The 1/2 oz. American Gold Eagle was the lowest mintage American Gold Eagle to be issued to date, with an extremely limited mintage of just 1,945 pieces.

Perhaps, most exciting, in 2021, the Mint's American Silver and Gold Eagle series will each receive a brand new reverse design for the first time in the over 30 years of the series' issuance, a move that is sure to generate collector excitement. To learn more about the forthcoming design change, read more on this Info-Vault article.

Going forward our coinage will continue to evolve as the nation evolves, but no matter what changes are in store, our coins will continue to reflect the ideals on which the United States was founded.