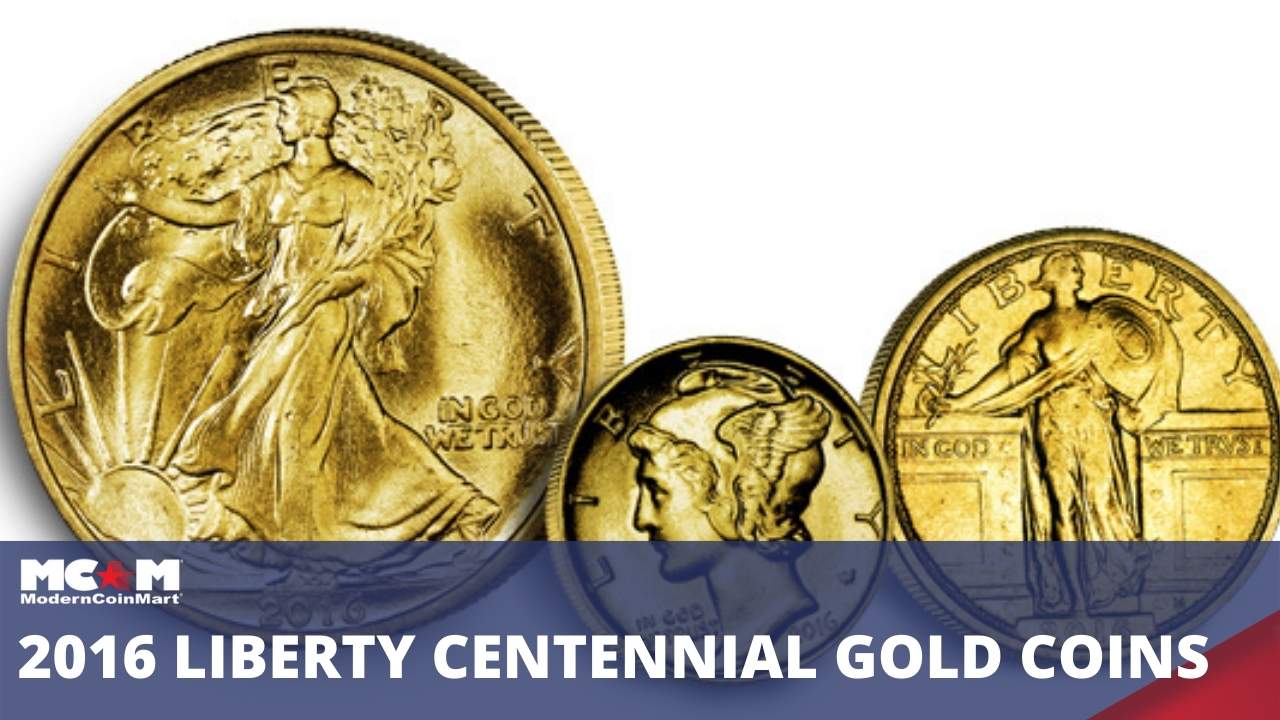 The U.S. Mint has released a new series of commemoratives to celebrate the centennial of three classic American coins: the Walking Liberty Half Dollar, the Standing Liberty Quarter, and the Mercury Dime. Each one of these coins are being restruck in .9999 fine gold, using their original 2016 design. These three coins are major releases of 2016 - make sure you will have all the information you will need to collect!

During the 2015 American Numismatic Association’s World Fair of Money in August 2015, a stunning new set of coins was announced for 2016. Rhett Jeppson, Deputy Director of the U.S. Mint, announced at a press forum that he was seeking approval for a trio of commemorative gold coins. These coins were proposed to honorer the 100th anniversary of three classic liberty-themed coins: the Walking Liberty Half Dollar, the Standing Liberty Quarter, and the Mercury Dime.

Members of the design review committee (CCAC) and numerous collectors expressed interest in seeing these coins struck in silver rather than gold to make them more accessible to collectors with limited budgets, but the U.S. Mint moved forward with plans to strike them in 24-karat (.9999) fine gold. The Mint has broad authority to issue collectible gold coins under existing statutory authority, whereas silver coins would require an act of Congress. This would have been a difficult task, especially during an election year.

Since the original 1916 coins had different weights than those planned for the 2016 coins due to different metal composition, the U.S. Mint decided to keep the diameters of these commemoratives close to the original coins. Because of this adjustment, thickness may not match the original coins. The coins will not have Mint marks, but they will have inscriptions for their weight, fineness, and gold purity.

April 21st was likely selected as the dime’s release date because it falls during the American Numismatic Association’s National Coin Week (April 17 to 23). This year's Coin Week was focused on the theme of liberty as represented on coins from ancient to modern times. A fitting time to begin a series honoring the centennial of three classic U.S. coins!

Despite being the smallest in the three-coin Gold Centennial series, it was a massive success. Its mintage of 125,000 coins sold out within 40 minutes of its release. Over 25 million dollars in orders were placed for these coins.

The 2016-W Mercury Dime Centennial is composed of 1/10 oz. of .9999 fine gold with a design matching the original 1916 issue. The diameter was, as mentioned, struck to be similar to the original Dime at 16.5mm. This coin is a grand commemorative of the 1916 Mercury Dime. Boasting extreme detail with an even, satin finish, it really is no wonder the coin is so popular!

These Gold Mercury Dime Centennials are available at ModernCoinMart (MCM) in a number of exciting options.

The Standing Liberty Quarter Centennial was issued on September 8th as the next release from the U.S. Mint in this Gold Centennial series. This coin has been struck out of 1/4 oz. of .9999 fine gold with a diameter of 22mm and a thickness of 1.63mm. The design matches what Hermon Atkins MacNeil created for the first issue of the Standing Liberty Quarter in 1916, before any revisions were made.

Like the dime, this quarter is struck with a specimen finish. This provides a matte appearance to the surface of the coin, similar to the original business strike. Unlike the previous dime that had a mintage of 125,000, only 100,000 2016-W 1/4 oz. Gold Standing Liberty Quarters were issued with a limit of only 1 coin per household. What better way to celebrate such a classic U.S. coin design, than with this unique U.S. commemorative?

You can purchase these Gold Standing Liberty Quarter Centennials at MCM through a variety of options.

The Walking Liberty Half Dollar Centennial is the final coin in the series. Released on November 17th, these coins were given a limited mintage of only 70,000! Struck out of 1/2 oz. of .9999 fine gold, this is the largest coin of the three centennial commemoratives.

Designed by the esteemed Adolph Weinman, this coin has become extremely popular from the first day it was struck back in 1916. Even now, the design remains as popular as ever with the yearly release from the U.S. Mint of the American Silver Eagle, a coin bearing the Walking Liberty design. The 2016 commemorative will be struck out of 1/2 oz. of .9999 fine gold, making it the largest coin in the series.

These Gold Walking Liberty Centennials are now available at MCM.

Historical Background to These Centennial Coins

To understand why the three 1916 coins play such a significant role in American numismatics, why these three coins remain so widely collected, and why collectors are so excited about the gold centennial commemoratives being issued this year, it is useful to review the historical background to the original silver coins.

Just as all Americans treasure the pursuit of liberty, collectors of American coins have always been strongly attracted to the theme of liberty. It is represented on U.S. coins in the allegorical form of Lady Liberty, the personification of our cherished ideals and, in many ways, the founding concept of our country.

The idea behind the creation of these three coins came from the widespread dissatisfaction with the designs of U.S. Mint Chief Engraver Charles Barber. In 1914, members of the influential New York Numismatic Club encouraged the U.S. Mint to produce new, better designs to replace three Barber coins - the Dime, Quarter, and Half Dollar - which was met with strong interest by the U.S. Mint’s leadership at that time.

After a design competition and meetings by the Commission of Fine Arts, the designs of acclaimed sculptor Adolph Weinman were selected for both the Dime and the Half Dollar. These became known as the Winged Liberty Head, or Mercury, Dime and the Walking Liberty Half Dollar. Herman MacNeil's design was selected for the Quarter, which became known as the Standing Liberty Quarter.

Each of the three coins contains important symbolism in their design. The Weinman Dime, which was immediately recognized as a major achievement in numismatic art, uses the head of a female Liberty wearing a winged cap. The artist explained that he chose the head because a full figure would not fit on a coin of this size and that “the wings crowning her cap are intended to symbolize liberty of thought.” The reverse has always been surrounded by a degree of controversy because it uses fasces, which is also featured in early Fascist imagery, but Weinman explained that he selected the motif “of the fasces and olive branch to symbolize the strength which lies in unity, while the battleax stands for preparedness to defend the Union.”

Weinman’s Liberty Half Dollar is one of the best-known classic American coin besides the Morgan Dollar, a July 1916 article in The Numismatist magazine of the ANA noted: “The goddess [Lady Liberty] is striding toward the dawn of a new day, carrying laurel and oak branches, symbolic of civic and military glory. The reverse shows an eagle perched high up on a mountain crag, wings unfolded. The pine growing out of the rock symbolizes America.”

The Standing Liberty Quarter of Herman MacNeil “is intended to typify the awakening of the country to its own protection. Liberty, a full figure, is shown stepping toward the country’s gateway, bearing upraised a shield from which the covering is being drawn. The right-hand bears an olive branch of peace.” The reverse shows an eagle in full flight with its wings extended

The 2016 tributes to these three beautiful and magnificent Liberty-themed coins will have broad appeal across the numismatic spectrum, including classic and modern coin collectors, and they are also likely to contribute to even greater interest in the original 1916 silver coins. They are clearly aimed at the true collector, rather than those who speculate on modern coinage.

Like the 2009 Ultra High Relief gold coin, which had a rather high mintage of 115,000 coins but has maintained its value and popularity over time, this Gold Centennial Coin Series is likely to remain in high demand long after the coins are no longer available from the Mint. Collectors often focus obsessively on mintages, but the fact is that certain coins, usually those with truly outstanding designs that everyone loves, are always in demand no matter how many coins were issued.