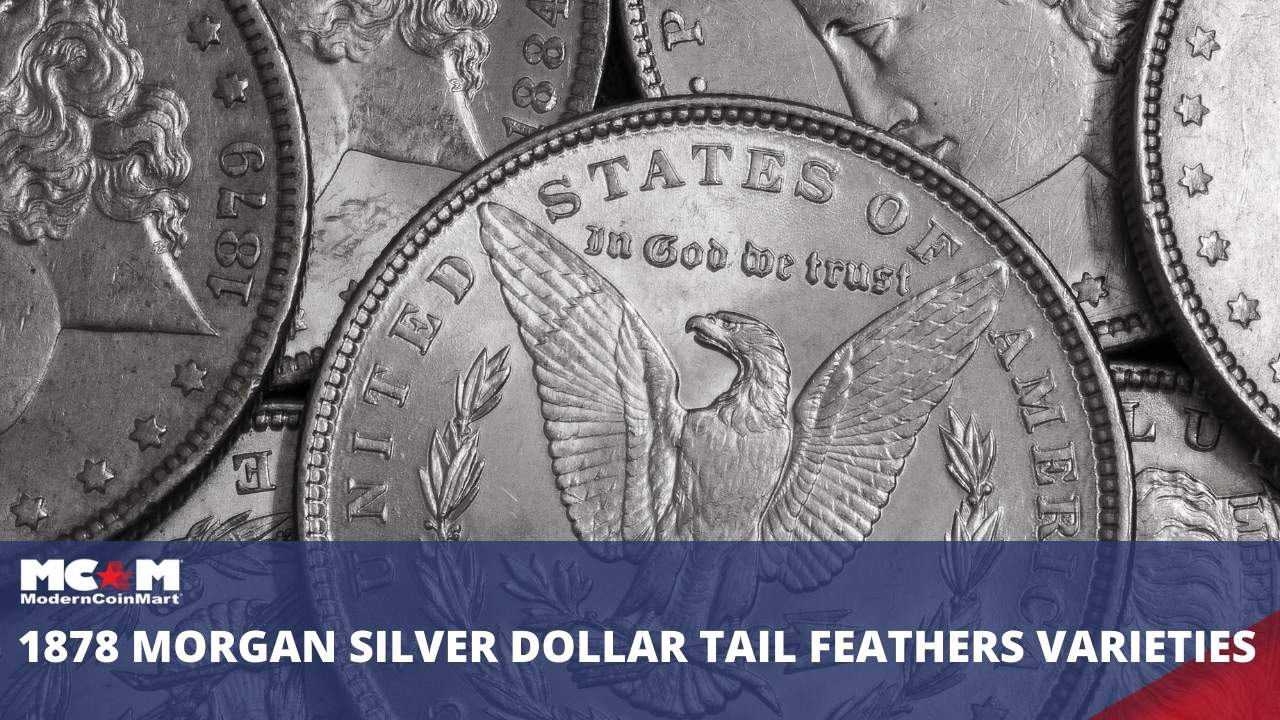 There are four significant reverses and some minor variations on those reverses used on Philadelphia Mint-struck 1878 Morgan silver dollars that can present a challenge to coin collectors and Morgan enthusiasts alike. These are known as die varieties, which means that there are subtle but distinct differences in several of the dies used to strike the reverse of first-year Philadelphia Morgan Silver Dollars. Collecting the first-year tail feathers varieties gives collectors a challenge and an opportunity to further their knowledge of the Morgan Silver Dollar series, but what are they, and why are they of interest to collectors? Read more to find out.

The Morgan Silver Dollar is one of the most widely collected large denomination silver coins ever circulated in the United States. The series ran from 1878 until 1904 and was put on hiatus until huge quantities were struck again in 1921. The coin was designed by a British immigrant and the future Seventh Chief Engraver of the U.S. Mint, George Morgan, as his first assignment for the Mint. Throughout its issuance, the series was struck at five mint locations: Philadelphia, San Francisco, Carson City, New Orleans, and Denver.

The series was not popular at first, with wide-ranging criticisms about the design and the usefulness of circulating these coins. However, they tended to be more popular and circulated more freely in more rugged areas like New Orleans, the rural South, Carson City, and San Francisco in the rough and tumble West. Still, others criticized the political interests that backed the Bland-Allison Act that led to the creation of the coin in the first place. As is widely known, most Morgan Dollars sat in U.S. Treasury and bank vaults for decades, toning in their original canvas bags. After World War I, untold hundreds of millions of these coins were melted. The precise numbers and specific mintages of these melted coins have led to a significant shortage of some dates and an entire field of study regarding surviving issues in the series. Collecting the series can be both a grand numismatic task as well as a great gateway for the novice collector. Many collectors will break up the series into smaller, cohesive chunks. Some will collect die varieties, others by date and/or the Mint of origin.

Even present-day Americans can agree that something was going on with the hind end of that bald eagle in the reverse design of the first year of issue Morgan Silver Dollars.

The original dies used in Philadelphia in 1878 clearly featured 8 tail feathers below the arrows on the legislatively mandated bald eagle that appeared in the reverse design. The 8 tail feathers coins were produced for about two weeks using this original reverse. Estimates vary about the number of coins struck with this reverse, but it is thought to be between 750,000 and one million coins.

How Did the Tail feather Die Varieties Occur?

The apocryphal story is that the coins were struck and released, and it was later brought to the Mint’s attention that the number of tail feathers on an eagle was actually seven, not eight. This discrepancy led to the dies being altered, resulting in the “quick fix” 7/8 tailfeathers reverse, and later, the 7 tailfeathers correction of the correction.

Why Do Collectors Collect These Tail Feathers Variety Morgans?

Like climbers climb Everest because it is there, Morgan Dollar enthusiasts collect these die variety tail feathers reverses because they are there and are a must-have for any Morgan Dollar completist. Collectors want to have examples of these coins to keep, share, and tell the story of the history of our country’s coinage.