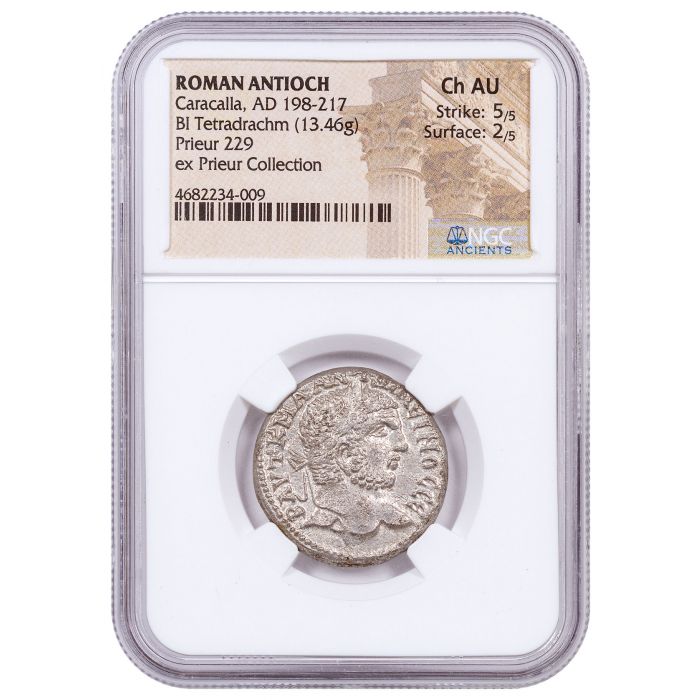 Why add this Tetradrachm of Roman Emperor Caracalla to your collection?

This billon tetradrachm honoring Caracalla is a Roman Provincial issue, struck at the Antioch Mint AD 198-217. As Emperor of the Roman Empire, Caracalla ordered the construction of the second largest baths in Rome, the Baths of Caracalla, which remained in operation for more than three centuries. The coin has been authenticated as part of the collection of the late Michel Prieur, a visionary in the field of numismatics. Realizing the potential of the internet, Prieur founded the Compagnie Generale de Bourse (CGB) in 1988, which is now one of the world's most respected online numismatic resources.

The reverse features an eagle with its wings outstretched, grasping a beaded wreath of laurels within its beak. The eagle stands upon a club, with an eight-pointed star between its legs. The inscription curving overhead translates from Greek as "Dressed in the power of the Tribune consul for the fourth time

NGC Ancients, the ancient coin specialists at the Numismatic Guaranty Corporation, deemed this AD 198-217 Roman Antioch Caracalla Tetradrachm to be in Choice About Uncirculated (Ch. AU) condition, which is equivalent to a grade of 55-58 on the Sheldon Scale. The coin features complete design details, with slight wear on the highest points. The tetradrachm is presented in a NGC holder with a certification label declaring its pedigree as the Prieur Collection.