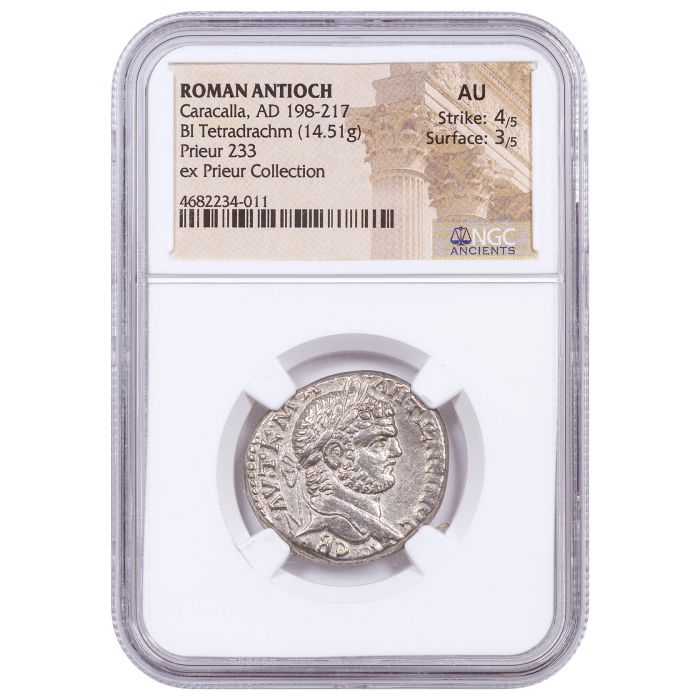 Why add this ancient Tetradrachm of Caracalla to your collection?

Caracalla was a ruler of the Roman Empire from AD 198-217. Caracalla was responsible for the introduction in 215 of the antoninianus, a short-lived silver coin which was debased and disappeared before the end of the century. Measuring approximately 26 mm in diameter, this Roman Provincial billon tetradrachm was created during the reign of Caracalla at the Antioch Mint. Billon was created by applying a wash of silver over a bronze base.

Caracalla is depicted on the obverse in a right facing pose, his head adorned with a ribbon-tied wreath of laurel. The portrait is encircled by a Greek inscription representing "Emperor Caesar Marcus Aurelius Antoninus August."

On the reverse, a Greek inscription which translates as "Dressed in the power of the Tribune consul for the fourth time," surrounds the image of an eagle. The majestic bird is illustrated perched on a horizontal club, with an eight-pointed star between its legs and a laurel wreath in its beak.

This AD 198-217 Roman Antioch Tetradrachm of Caracalla was submitted to NGC Ancients, the ancient coin division at the Numismatic Guaranty Corporation (NGC) and judged to be in About Uncirculated (AU) condition. This equates to a Sheldon scale grade of 50-53. The coin hails from the collection of the late French numismatist Michel Prieur, who established the Compagnie Generale de Bourse (CGB) in 1988. Firmly believing that the internet would change the field of numismatics, Prieur's legacy, the CGB website, currently offers free information on over 500,000 coins and banknotes in seven languages.

Make this billon Tetradrachm of Caracalla the next addition to your ancient coin collection!