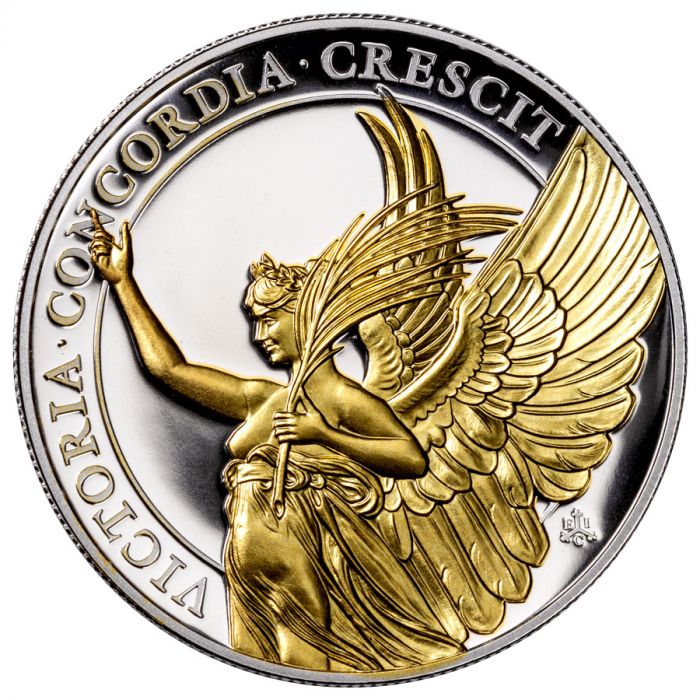 The first release of the East India Company's Queen's Virtues six-coin series is a celebration of Victory. Inspiration for the series is drawn from the memorial erected on the grounds of Buckingham Palace to honor the life of Queen Victoria. Unveiled in 1911, a decade after her death, the memorial is a monument to the virtues befitting a Queen: Victory, Truth, Justice, Charity, Courage and Constancy.

Obverse: The obverse is adorned with an elegant gilded portrait of the current British monarch, Her Majesty Queen Elizabeth II. Surrounding inscriptions include "QUEEN ELIZABETH II," "ST. HELENA," "ONE POUND" and "2021." This rendition of the Queen was executed in 2015 by Jody Clark, an award-winning sculptor/engraver for The Royal Mint since 2012.

Reverse: On the reverse a gilded Winged Angel of Victory appears, based upon the statue at the peak of the memorial. Like the original statue, the angel grasps a palm frond, a symbol representing victory, triumph and peace, which originated in the Middle East. The Latin inscription "VICTORIA CONCORDIA CRESCIT" (Victory through Harmony) curves in front of the angel, with the "EIC" Mint mark below.

This 2021 Saint Helena 1 oz. Silver Queen's Virtues: Victory gilded proof coin is judged to be in GEM Proof condition, featuring a sharp strike, expertly finished surfaces and outstanding eye appeal. The ungraded silver coin is encapsulated and housed in an elegant presentation case with a Mint issued Certificate of Authenticity.

This gilded 1 oz. silver proof 2021 Victory coin from the Saint Helena Queen's Virtues series will be a fabulous addition to your collection!