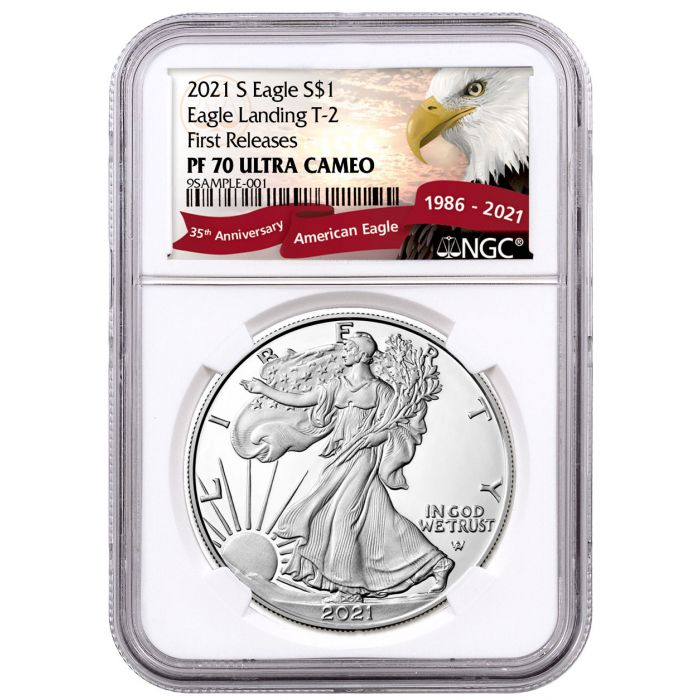 Skip to the beginning of the images gallery
This San Francisco struck 2021-S Proof American Silver Eagle Type 2 is certified by NGC to be a First Release in Proof 70 Ultra Cameo condition and encapsulated with an Exclusive Eagle Label.

The U.S. Mint marks the 35th anniversary of the Proof Silver Eagle with the first major design change in the series history. John Mercanti's original heraldic eagle reverse design makes way for an Eagle Landing design by Emily Damstra. The new version also includes Adolph Weinman's artist mark on the obverse for the first time in the series, as well as an interrupted serrated edge, a new security feature. Fans of the Silver Eagle Series should not miss out on this historic issue.

Obverse: Adolph Weinman's Walking Liberty design graces the obverse. Liberty carries branches that represent civilian and military honors in the early morning sun. Her name, "LIBERTY," spreads throughout the top half of the rim, while other obverse inscriptions read, "2021" and "IN GOD WE TRUST." Adolph Weinman designed two of the best known coins of the 20th century, the Walking Liberty Half Dollar and the Mercury Dime. In addition to these and other numismatic contributions, he was also a sculptor, and his work can still be seen in many American cities.

Reverse: Emily Damstra's Eagle Landing design replaces John Mercanti's adaptation of the Great Seal of the United States on the reverse. The bird spreads its wings as it prepares to land with an oak branch in its talons. Encircling the eagle are three rim inscriptions, which read, "UNITED STATES OF AMERICA," "ONE DOLLAR," and "1 OZ. FINE SILVER." Also inscribed on this face is the statutory motto "E PLURIBUS UNUM."

Numismatic Guaranty Corporation (NGC) provided the grading information for this coin on an exclusive Eagle label. NGC graded the piece Proof 70, which means that it appears perfect even under 5x magnification. The grading company also credited this piece for having deeply mirrored fields and heavily frosted devices by certifying it Ultra Cameo. Finally, the company noted that this coin was submitted for grading no more than 30 days after its initial release from the mint by certifying it First Releases.

Don't miss your chance to own this Proof 2021-S Type 2 American Silver Eagle.