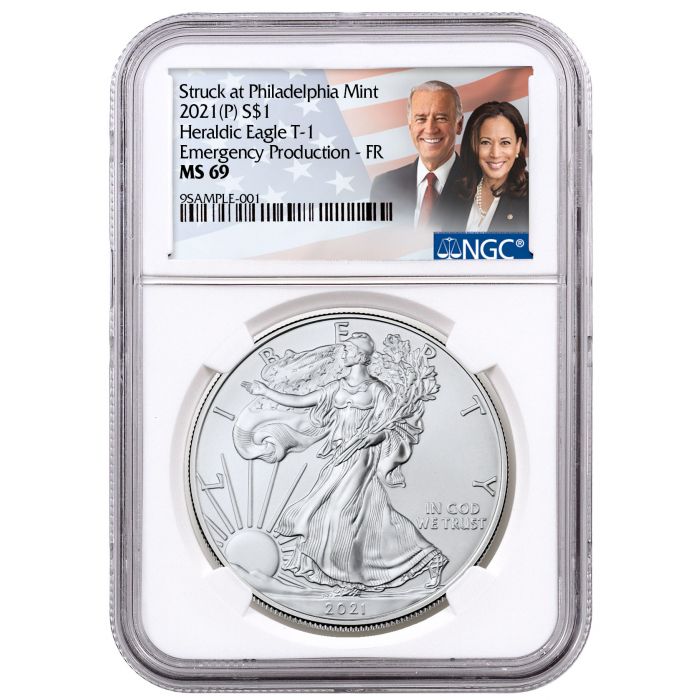 Skip to the beginning of the images gallery
Add this highly coveted 2021-(P) American Silver Eagle Struck at Philadelphia Mint - Emergency Production Type 1 certified by NGC to be a First Release in Mint State 69 condition and encapsulated with a Biden/Harris Label to your collection.

Why buy this Emergency Production 2021-(P) Type I American Silver Eagle Struck at the Philadelphia Mint?

To keep up with customer demand for in the face of Covid-19 related production delays, the U.S. Mint authorized a production run of 2021 dated bullion Silver Eagles at the Philadelphia Mint. This coin was a part of that historic production and is also part of the 35th anniversary edition of the coin. Plus its also one of the final bullion issues to include John Mercanti's heraldic eagle reverse design, as the reverse will be replaced at some point during 2021, marking the first major design change of the series!

Obverse: The coin's obverse design comes from the Walking Liberty Half Dollar, which was designed by Adolph Weinman. The morning sun emerges from beyond the horizon as an American flag draped Liberty carries branches of laurel and oak. Inscriptions on the obverse note the figure's name, "LIBERTY," the national motto, "IN GOD WE TRUST," and the date, "2021." Adolph Weinman is best known for creating the designs of the Mercury Dime and the Walking Liberty Half Dollar. He also made other numismatic contributions and was a prominent sculptor, whose work remains on display in numerous American cities.

Reverse: John Mercanti created the reverse design specifically for the Silver Eagle Series. Modeled off of the Great Seal of the United States. It consists of thirteen stars and an eagle that protects a union shield. Inscriptions along the rim note the name of the issuing country, "UNITED STATES OF AMERICA," the coin's weight, "1 OZ. FINE SILVER," and the face value, "ONE DOLLAR." John Mercanti spent over three and a half decades with the U.S. Mint, part of which he spent as its Chief Engraver. He designed more coins and medals than anyone else in its history.

Numismatic Guaranty Corporation (NGC) provided the grading information for this coin on a label that bears an image of President Joe Biden and Vice President Kamala Harris standing against an American flag background. NGC graded the coin Mint State 69, which means that it appears perfect to the unaided eye. The grading company also certified this coin First Releases, thus indicating that it was submitted for grading no more than 30 days after its initial release from the mint.

Add this 2021-(P) Emergency Production Type I American Silver Eagle Struck at the Philadelphia Mint to your collection today.