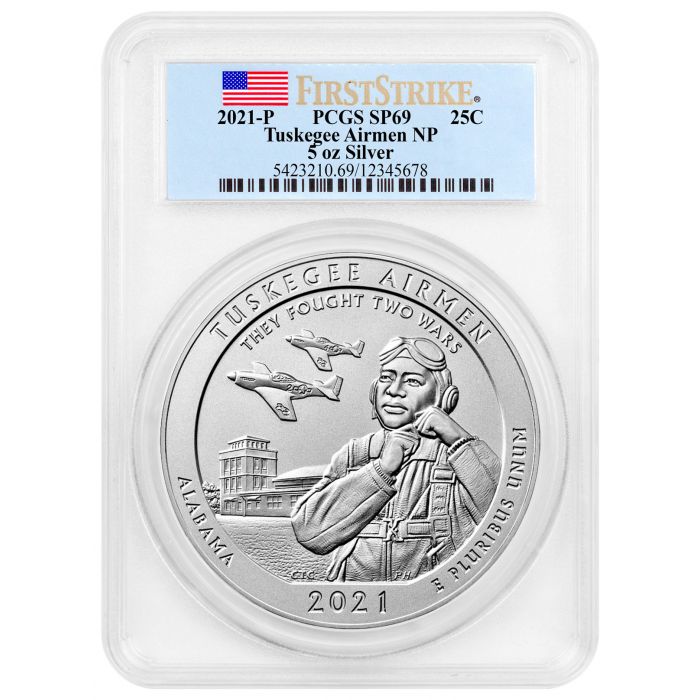 Skip to the beginning of the images gallery
Buy this highly collectible 2021-P 5 ounce Silver Tuskegee Airmen National Historic Site ATB Specimen certified by PCGS to be a First Strike in Specimen 69 condition and encapsulated with a Flag Label today.

This exciting silver specimen quarter represents the conclusion of the U.S. Mint's America the Beautiful Quarters series, which was launched in 2010 to honor the country's national parks, memorials and historic locations. This 56th release of the series is dedicated to Alabama's Tuskegee Airmen National Historic Site. During a time in the nation's history wrought with segregation and prejudice, the Tuskegee complex was the only World War II era training facility for African-American pilots of the U.S. Army Air Corps.

Obverse: The likeness of George Washington created by acclaimed American sculptor John Flanagan in 1932 is centered on the obverse. Inscribed "UNITED STATES OF AMERICA," "LIBERTY," "IN GOD WE TRUST," "QUARTER DOLLAR" and Philadelphia's "P" Mint mark.

Reverse: The reverse design depicts a pilot, two airborne P-51 Mustangs and the Moton Field control tower beneath the inscription "THEY FOUGHT TWO WARS." The phrase is indicative of the fierce dedication of the Airmen, in the overseas battle against fascism and the struggle with local discrimination. Inscribed "TUSKEGEE AIRMEN," "ALABAMA," "2021" and "E PLURIBUS UNUM," with ".999 FINE SILVER 5.0 OUNCE" on the coin's edge.

This 2021-P Tuskegee Airmen National Historic Site 5 oz. Silver Specimen America the Beautiful quarter was submitted to the Professional Coin Grading Service (PCGS) for review within thirty days of release and judged to be in virtually flawless Specimen 69 condition. The coin is presented in a sonically sealed PCGS protective holder with an American flag style certification label confirming its First Strike status.