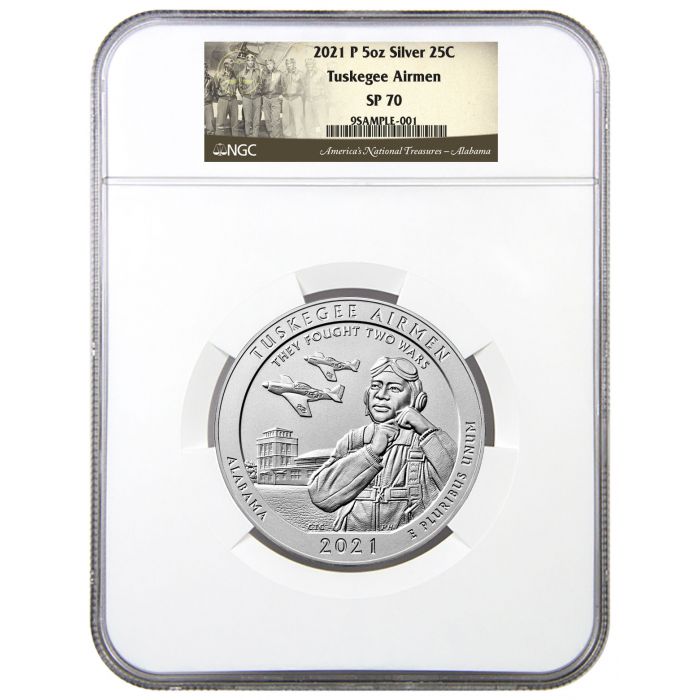 Skip to the beginning of the images gallery
Buy this 2021-P 5 ounce Silver Tuskegee Airmen National Historic Site ATB Specimen certified by NGC to be in Specimen 70 condition today.

This 5 oz Silver Specimen Tuskegee Airmen National Historic Site marks the end of the America the Beautiful Series. The series has taken collectors on a tour of many of America's national parks. This issue honors the Tuskegee Airmen, predominantly African-American aviators who trained in Alabama and fought in World War II. It is a fantastic choice for collectors looking to complete an America the Beautiful Collection, as well as anyone who honors the sacrifices made by American servicemen and women.

Obverse: John Flanagan's 1932 portrait of President George Washington features on the obverse. The inscriptions "LIBERTY" and "IN GOD WE TRUST" are included to the left and right of the image, respectively. The name of the issuing country, "UNITED STATES OF AMERICA," and the coin's face value, "QUARTER DOLLAR," are inscribed along the rim.

Reverse: Phebe Hemphill sculpted Chris Costello's reverse design. Two P-51 Mustangs maneuver overhead as a pilot gets ready for training below. "THEY FOUGHT TWO WARS" is inscribed at the top of the design. A rim frame encircling the image bears four inscriptions, including "TUSKEGEE AIRMEN" and "ALABAMA."

The experts at Numismatic Guaranty Corporation (NGC) awarded this piece their highest grade, Specimen 70. "Specimen" refers to a coin that shares qualities of business strikes and proofs, while "70" means that it appears perfect under 5x magnification.