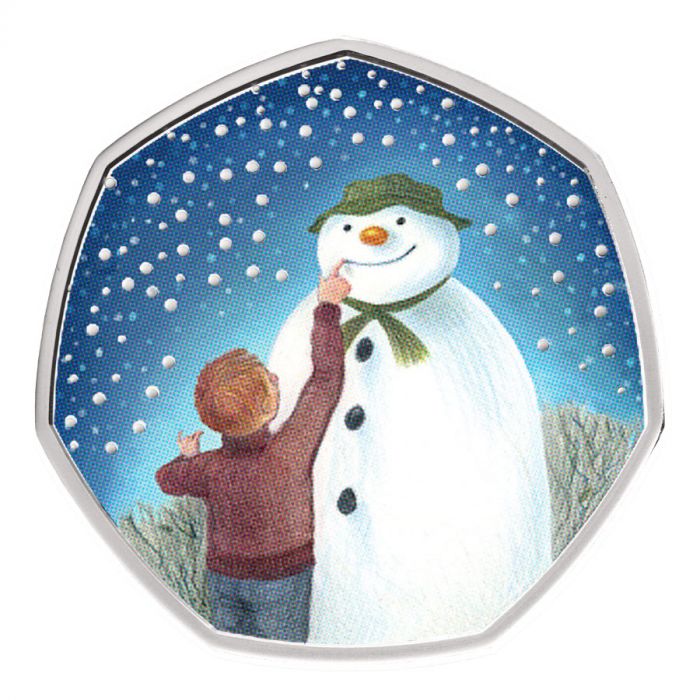 Skip to the beginning of the images gallery
Add this 2021 The Snowman Heptagonal Shaped 8 gram Silver Colorized Proof 50p Coin in GEM Proof condition to your collection.

In 2018, The Royal Mint of Great Britain introduced a commemorative coin series in tribute to the 40th anniversary of The Snowman™, a wordless children's picture book by British author Raymond Briggs. The Snowman illustrates the tale of a boy who builds a snowman that comes to life. The pair enjoys a night of adventure, before the snowman melts in the rising sun.

Obverse: The obverse is adorned with a likeness of Her Majesty Queen Elizabeth II in a right facing pose. Surrounding inscriptions include "ELIZABETH II," "D.G. REG. F.D.," "50 PENCE" and "2021." This effigy, officially recognized as the fifth definitive coinage portrait of the monarch, is an example of the artistry of Jody Clark, an acclaimed sculptor for the Royal Mint since 2012.

Reverse: The reverse features an enchanting rendition of the boy reaching up to draw a smile on his newly created Snowman friend, as snowflakes fall from the sky around them. The heartwarming image was crafted exclusively for the coin by award-winning British illustrator and animator Robin Shaw.

This 2021 Great Britain The Snowman Heptagonal 8 g Silver Proof 50p colorized coin is presented in GEM Proof condition, featuring a superior quality strike, gorgeously surfaces and exceptional eye appeal. The coin is encapsulated in a display worthy illustrated acrylic block, and housed in a Mint-branded protective box with a Certificate of Authenticity.