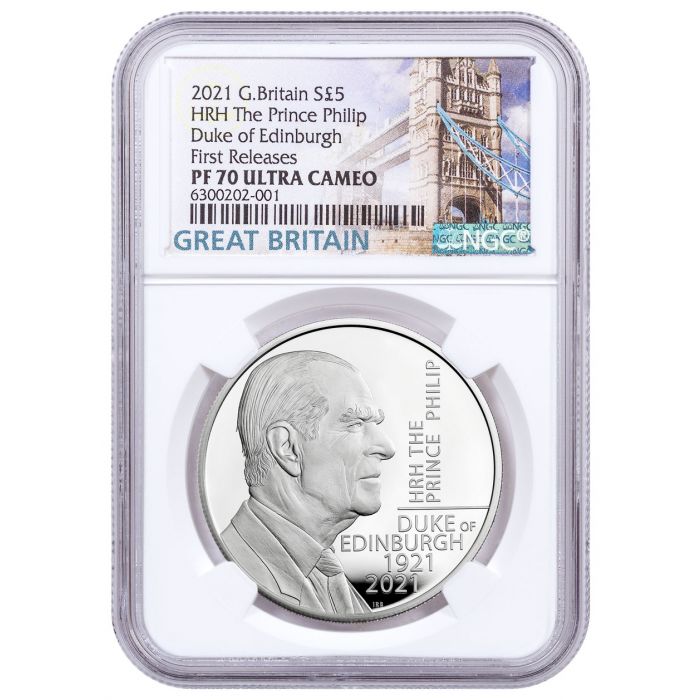 Skip to the beginning of the images gallery
Add this 2021 Prince Phillip - Duke of Edinburgh 28.28 gram Silver Proof £5 Coin certified by NGC to be a First Release in PF70UC condition and encapsulated with a Tower Bridge Label to your collection.

Prince Philip died on April 9, 2021 two months shy of his hundredth birthday. Great Britain and followers of the royal family around the world mourned their loss. Now, the Royal Mint honors the longest serving consort in British history with this stunning 28.28 g piece from The Royal Mint. The coin is a must have for any collector wishing to honor Philip's legacy.

Obverse: A portrait of reigning British monarch Queen Elizabeth II graces the obverse. The image, which was designed by Jody Clark, shows the monarch wearing her Royal Diamond Diadem, the crown that she traditionally wears at the State Opening of Parliament. Her name and abbreviated Latin title, "ELIZABETH II D G REG F D," join the face value of the coin, "5 POUNDS," on the rim.

Reverse: The reverse bears a portrait of Prince Philip by Ian Rank-Broadley. Philip approved the right-side effigy in 2008. Next to him are the inscriptions "HRH (His Royal Highness) THE PRINCE PHILIP." His title, "DUKE OF EDINBURGH," and the dates of his life, "1921-2021," are below.

Numismatic Guaranty Corporation (NGC) provided the grading information for this piece on a label that bears an image of one of London's most famous landmarks, Tower Bridge. NGC graded the coin Proof 70 and certified it both Ultra Cameo (UC) and First Releases (FR). The Proof 70 grade indicates that the coin appears perfect under 5x magnification. The UC designation credits the coin with exhibiting particularly sharp contrasts between heavily frosted devices and deeply mirrored fields, while the FR certification indicates that it was submitted for grading no more than 30 days after its initial release from the mint.