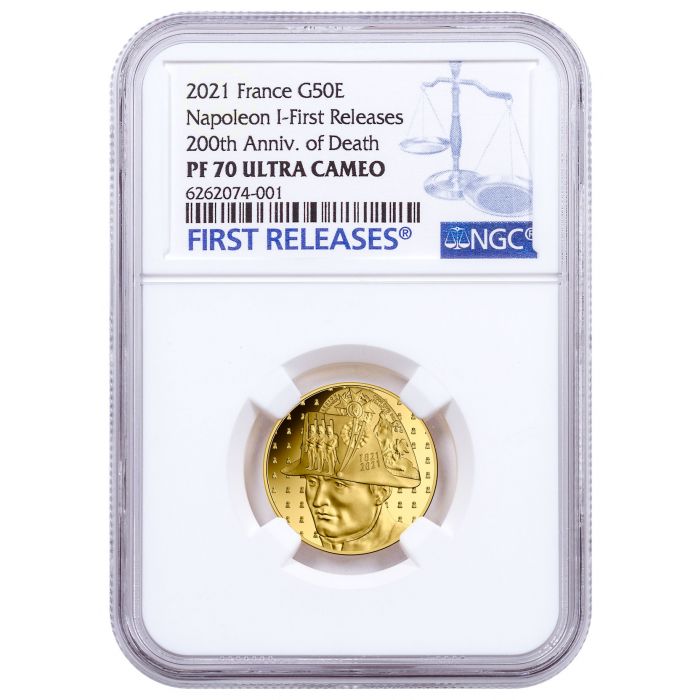 Skip to the beginning of the images gallery
You will treasure this 2021 Napoleon Bonaparte - 200th Anniversary of Death 1/4 ounce Gold Proof €50 Coin certified by NGC to be a First Release in Proof 70 Ultra Cameo condition.

Monnaie de Paris marks the 200th anniversary of the death of Napoleon Bonaparte with this stunning quarter ounce gold piece. Napoleon is among the most important figures in European history. He heavily influenced, directly and indirectly, the map and culture of the continent today. Admired by some and reviled by others, he has a controversial legacy, but nobody can dispute his import.

Obverse: The obverse features a painting by Jacques-Louis David. It features a scene from the coronation of Napoleon and Josephine on December 2, 1804. The date, "2021," is near the center. Inscriptions on the bottom read, "D'AP. DAVID" and "SACRE DE L'EMEREUR NAPOLEON."

Reverse: The Louvre and its famous pyramid feature on the reverse. Within the pyramid is one of the masterpieces that the museum houses, the Victory of Samothrace. The name of the issuing country, "RF" (Republique francaise), and the coin's face value, "€50" are noted in the pyramid, while the name of the museum, "LOUVRE," is inscribed at the bottom.

This coin earned Numismatic Guaranty Corporation's (NGC's) highest grade, Proof 70, which means that it appears flawless even under 5x magnification. This example was also certified First Releases, which means that it was submitted for grading within 30 days of its initial release from the mint.