Skip to the end of the images gallery
Trending 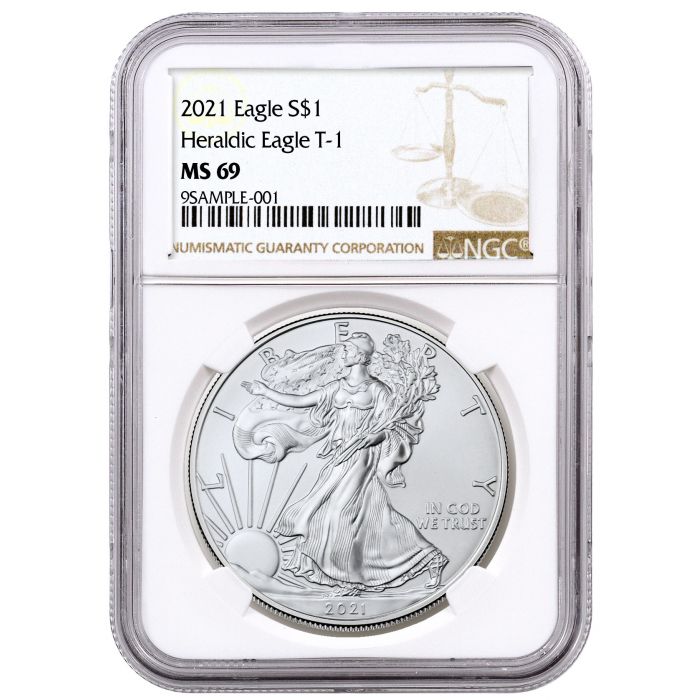 Skip to the beginning of the images gallery
You will treasure this much desired 2021 American Silver Eagle Type 1 certified by NGC to be in Mint State 69 condition and encapsulated with a Brown Label.

Why purchase this 2021 Silver American Eagle?

Obverse: The morning sun emerges from beyond the horizon as an American flag draped Liberty strides confidently on the obverse. The image was revived for the Silver Eagle Series after first appearing on Adolph Weinman's Walking Liberty half dollar. It is joined by inscriptions of the featured figure's name, "LIBERTY," as well as the national motto, "IN GOD WE TRUST," and the date, "2020." The United States had a numismatic renaissance in the early 20th century, and Adolph Weinman was a major contributor to it. Weinman's most famous works include the Mercury dime and the Walking Liberty half dollar.

Reverse: John Mercanti created the reverse design specifically for the Silver Eagle Series. Modeled off of the Great Seal of the United States, it consists of an eagle protecting a union shield under thirteen stars. Rim inscriptions read, "UNITED STATES OF AMERICA," "1 OZ. FINE SILVER," and "ONE DOLLAR." John Mercanti spent over a third of a century with the US Mint, including time as its Chief Engraver. Over the course of his tenure, he created more coin and medal designs than anyone else in the mint's rich history.

Add this American 2021 Silver Eagle to your collection today.