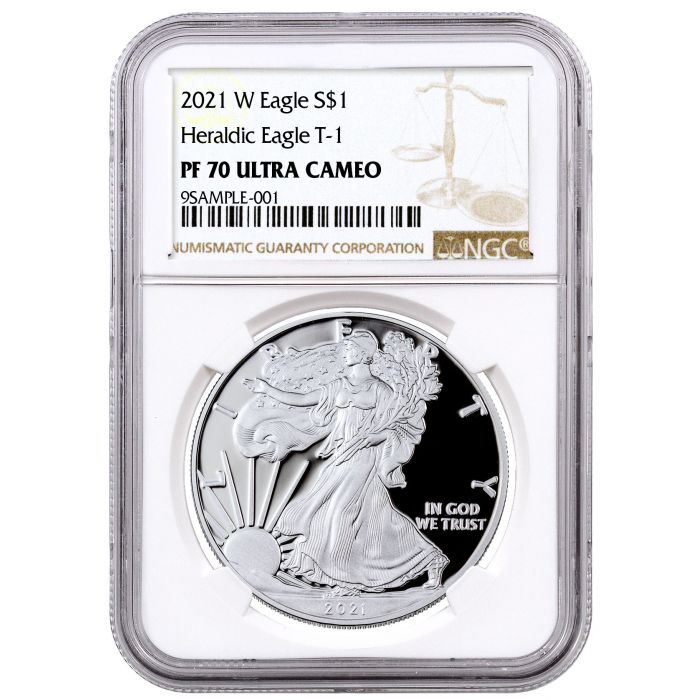 Skip to the beginning of the images gallery
This West Point struck 2021-W Silver Type 1 Proof American Eagle is certified by NGC to be in Proof 70 Ultra Cameo condition.

Share in the 35th anniversary of one of the most popular collectable coins in America, the Proof Silver Eagle. The coin continues to be a favorite among many collectors for its stunning display of work by two numismatic masters. Like its bullion counterpart, this piece is backed by the U.S. government for weight and purity. 2021 will be a notable year for the American Silver Eagle series because for the first time since its debut in 1986, the original heraldic eagle reverse design will transition to a new design created by Emily Damstra later in 2021. This 2021-W Proof Silver Eagle marks the final time the U.S. Mint will strike a Proof Silver Eagle at the West Point Mint with the original reverse design!

Obverse: The obverse design comes from Adolph Weinman's Silver Eagle. Liberty carries laurel and oak branches, which represent civilian and military honors, respectively, as she walks against a backdrop of the morning sun. Her name, "LIBERTY," is inscribed on this face, as are the national motto, "IN GOD WE TRUST," and the date, "2021." Adolph Weinman designed two of the most famous coins in American history, the Walking Liberty Half Dollar and the Mercury Dime. He was also a prominent sculptor whose work can still be seen in many American cities.

Reverse: John Mercanti's reverse design is an adaptation of the Great Seal of the United States. Thirteen stars are arranged above the head of an eagle, which protects a union shield. Inscriptions along the rim read, "UNITED STATES OF AMERICA," "1 OZ. FINE SILVER," and "ONE DOLLAR." John Mercanti served as the twelfth Chief Engraver of the U.S. Mint. He has designed more medals and coins than anyone else in the institution's history.

The experts at Numismatic Guaranty Corporation (NGC) awarded this coin their highest grade, Proof 70. That grade is reserved exclusively for coins that appear perfect even under 5x magnification. NGC also designated this piece Ultra Cameo, which indicates that it exhibits sharp contrasts between heavily frosted devices and deeply mirrored fields.