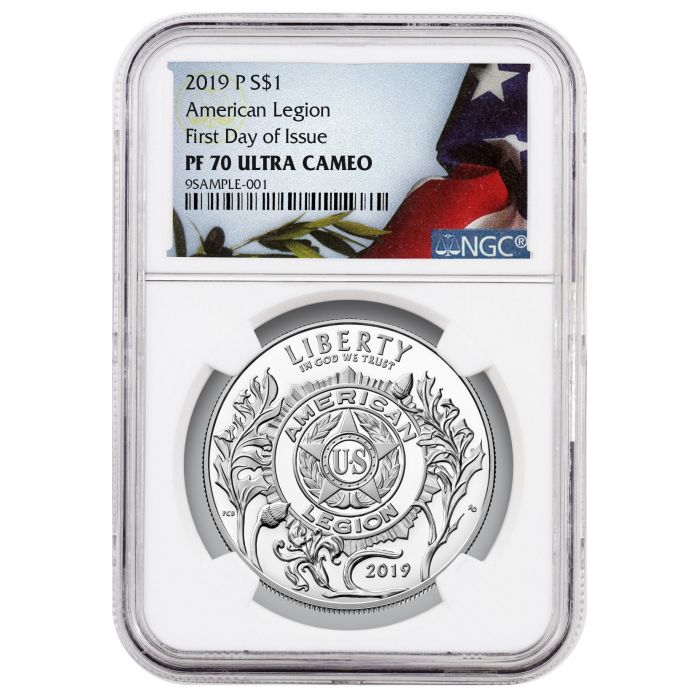 Skip to the beginning of the images gallery
Discover this 2019-P American Legion Commemorative Silver Dollar Proof Coin certified by NGC to be a First Day of Issue in Proof 70 Ultra Cameo condition and encapsulated with a Liberty Flag Label for your collection.

Share in the US MInt's commemoration of the centennial anniversary of the founding of the American Legion with this Commemorative Silver Dollar Proof. The coin honors the country's largest veterans organization, which has almost two million members. It is one of three issued to mark the occasion. Struck from 26.73 g of .999 fine silver, this piece bears the "P" mint mark of the Philadelphia Mint. It is part of a joint mintage of 400,000 pieces, which also includes business strikes.

Paul C. Balan's obverse design, which was sculpted by Renata Gordon, features the emblem of the American Legion. Oak leaves and a lily adorn the emblem. The inscriptions "LIBERTY" and "IN GOD WE TRUST" are at the top, while the date, "2019," is also included on this face.

Patricia Lucas-Morris's reverse design consists of the American flag crossed with the American Legion flag. Above the crux are a fleur de lis and the inscription "100 YEARS OF SERVICE." The fleur de lis is a reference to the fact that the Legion was founded in Paris. "UNITED STATES OF AMERICA" and "E PLURIBUS UNUM" (From many, one) are inscribed along the rim, while the coin's face value, "$1," is set off to the right.

Numismatic Guaranty Corporation (NGC) certified that this coin is perfect as seen under 5x magnification by awarding it their highest grade, Proof 70. The grading company further credited it with having particularly sharp contrasts between heavily frosted devices and deeply mirrored fields by certifying it Ultra Cameo and indicated that it was submitted through an exclusive grading process by labeling it "First Day of Issue." Grading information comes on a label that bears an American flag.