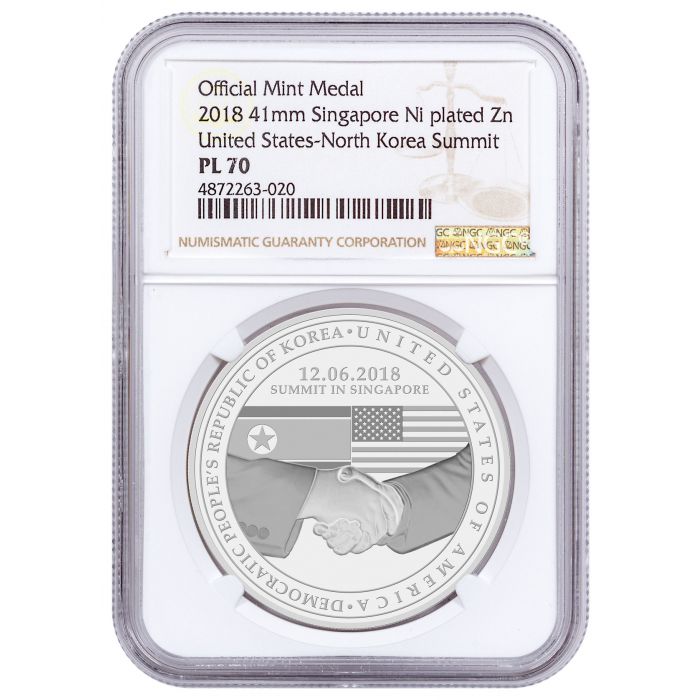 Skip to the beginning of the images gallery
Add this highly coveted 2018 United States - North Korea Summit 20 gram Nickel-Plated Zinc Prooflike Medal certified by NGC to be a First Release in Prooflike 70 condition to your collection.

In 2018, US President Donald Trump and North Korean Chairman Kim Jong Un held an historic summit in Singapore. The event marked what the world hopes will prove the first step toward improved relations between the two countries. This medal was struck at the home mint of the host nation for the summit, the Singapore Mint. It is a fantastic choice for collectors who are interested in world history, as well as those who are dedicated to the cause of peace.

The obverse design features two hands shaking in front of the flags of the two nations involved in the summit. The North Korean flag is set off to the left, while the American flag is to the right. The date and the event, "12.06.2018" and "SUMMIT IN SINGAPORE," are inscribed above the flags. The entire image is encircled by a rim frame in which the names of the two countries involved, "UNITED STATES OF AMERICA" and "DEMOCRATIC PEOPLE'S REPUBLIC OF KOREA," are inscribed.

A dove of peace spreads its wings on the reverse under an inscription of the words "WORLD PEACE." At the bottom of the design, roses and magnolia sieboldii, the national flowers of the United States and North Korea, are interlaced with other. The colorful image enhances the hopeful theme of the coin.

This medal received Numismatic Guaranty Corporation's (NGC's) highest grade, Proof 70, which is given only to pieces that are flawless as seen under 5x magnification. It was also certified Ultra Cameo, which means that the contrasts between frosted devices and mirrored fields are exceptionally strong on both faces.