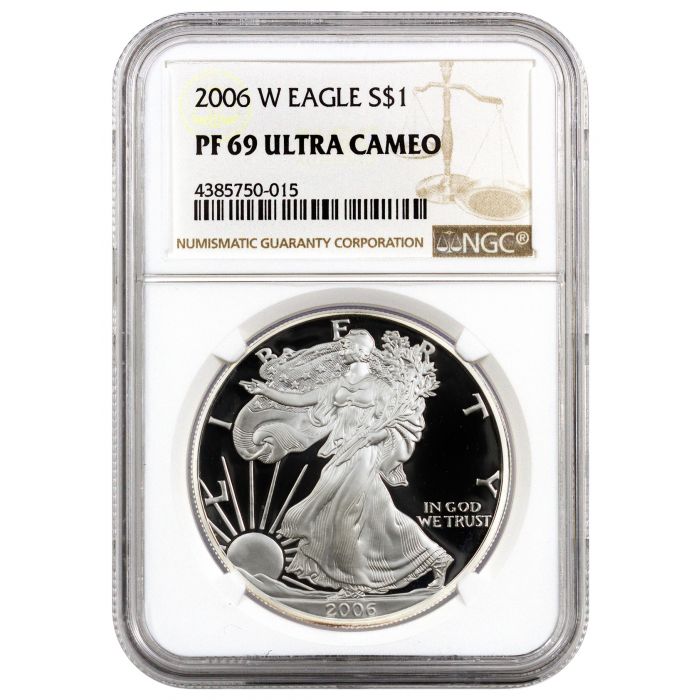 Skip to the beginning of the images gallery
Struck at the West Point Branch of the U.S. Mint, this incredible 2006-W Proof American Silver Eagle Coin is certified by NGC to be in Proof 69 Ultra Cameo condition.

This 2006-W Proof Silver Eagle is a stunning rendering of the design of the design used on the world’s most popular government bullion coin. Patriotic imagery is on full display on both sides of this piece, and the fact that it was struck at the West Point Mint is all the more meaningful for those who are fond of the Military Academy at that location. With a diameter of 40.6 mm, this coin is large enough for just about anyone to be able to appreciate the design without the need for a lens, and its 1 Troy oz. of silver is guaranteed by the United States government.

Adolph Weinman’s 1916 design for the Walking Liberty half dollar is used as the obverse for this 2006-W Proof Silver Eagle. Lady Liberty is depicted wearing a Phrygian cap and stepping toward the left side of the coin, where the sun is setting behind a mountain. By her side, she carries branches of oak – a symbol of military honors while laurel symbolizes civilian. She is clad in an American flag, part of which waves in the upper left quadrant. Her name, “LIBERTY,” arches from the sun’s rays on the left to just above the inscription of the American motto, “IN GOD WE TRUST,” on the right. The mintage year, “2006,” is inscribed at the bottom.

On the reverse is the image that John Mercanti modeled off of the Great Seal of the United States. An eagle extends its wings upwards, while a shield blocks its body. Its head extends over the shield holding a ribbon, which reads, “E PLURIBUS UNUM” (From many, one). Over the eagle’s head, 13 five-pointed stars are arranged in a downward pointing triangle. Like the thirteen stripes on the shield, they represent the original states. Symbols of America’s preference for peace and willingness to fight for her values are held in the bird’s talons. The mint mark, a “W,” is inscribed in the lower left. “UNITED STATES OF AMERICA,” the name of the country that issued the coin, is one of two inscriptions along the coin’s rim. The other one at the bottom reads, “1 OZ. FINE SILVER~ONE DOLLAR.”