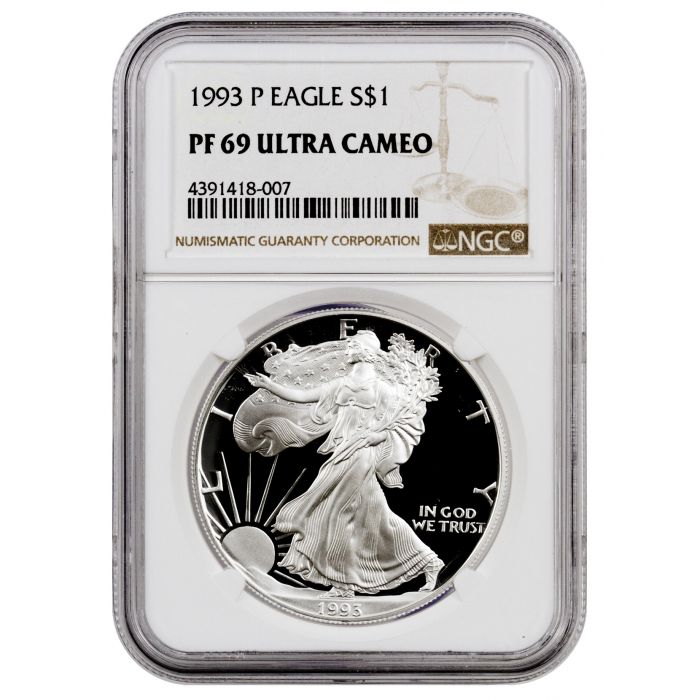 Skip to the beginning of the images gallery
Discover this beautiful 1993-P Proof American Silver Eagle Coin certified by NGC to be in Proof 69 Ultra Cameo condition today.

American Silver Eagles are the flagship bullion coin of the U.S. Mint and the most widely traded and collected modern U.S. coin of all time.

In 1993 production of the proof series of American Silver Eagles, which began in 1986 as did the bullion version of this coin, was moved from the San Francisco Mint to the Philadelphia Mint.

Sales of the proof Silver Eagles declined in 1993 by 92,393 coins compared to the previous year and by almost 200,000 coins compared to sales three years earlier. The final mintage for 1993, which came in at 405,913, is one of the lowest for the series, and because of that this coin has usually carried a premium over most other coins in the series.

The 1993 coin was sold both individually and in a special five-coin Philadelphia Mint Bicentennial Set, which accounted for 12,869 of the 1993 proof Silver Eagles. The Philadelphia set also included a $5, $10, and $25 American Gold Eagle from the same year plus a silver medal of the famous painting by John Ward Dunsmore of Martha Washington inspecting the first U.S. coins ever struck.

The coins from that set have tended to develop toning over the years, and examples of this date that have original surfaces are not easy to obtain.

This census data suggests two major points. First, at this time the Mint was not producing these coins to as high standards as they do today, which is why so few graded 70 in 1993.

Second, as a result prices for proof 70 examples of the 1993-P coin are very costly. This proof 60 example will fit in nicely with a set of proof Silver Eagles without breaking your budget.

Finally, premiums for better-date coins in this series like this one have ebbed and flowed over the years. Now is a good time to purchase this coin because its current premium is much lower than what it has sold for in the past.