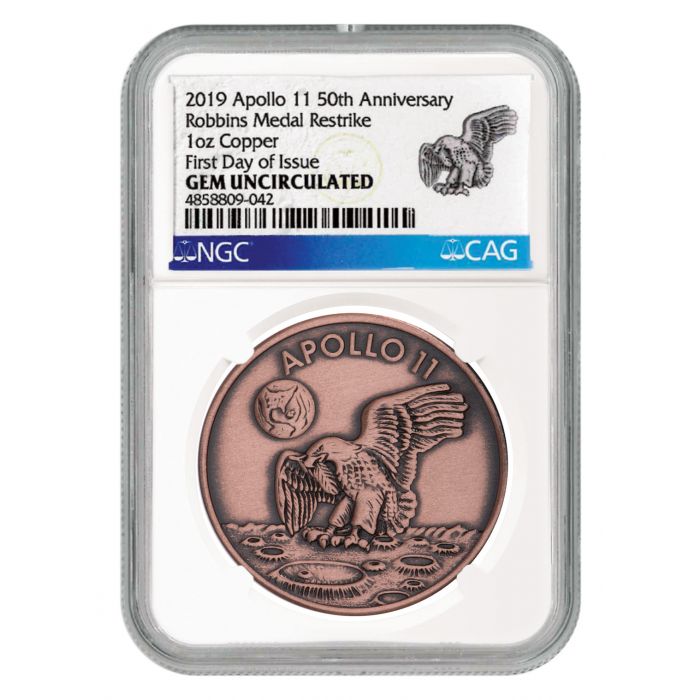 Skip to the beginning of the images gallery
Discover this much desired 1969-2019 Apollo 11 50th Anniversary Robbins Medals 1 ounce Copper Antiqued Medal certified by NGC to be a First Day of Issue in GEM Uncirculated condition for your collection.

Since NASA's Apollo 7 mission in 1968, Robbins Medals have been produced for, and flown on, every U.S. manned space flight, designed exclusively for each voyage. This 1 oz. antiqued copper medallion struck by the Sunshine Mint in honor of the 50th Anniversary of the historic Apollo 11 journey, and man's first small steps on the moon, replicates the medal carried by astronauts Neil A. Armstrong, Michael Collins and Edwin E. "Buzz" Aldrin, Jr.

An eagle in flight is depicted on the obverse, with an olive branch in its beak, moments before landing on the cratered surface of the moon. A view of the earth as seen from the moon appears above, along with the inscription "APOLLO 11."

Apollo 11's dates of launch, landing and return are inscribed on the reverse, encircled by the astronaut's names "ARMSTRONG-COLLINS-ALDRIN," "50th ANNIVERSARY" and "1969-2019."

This exceptional 1969-2019 Apollo 11 50th Anniversary 1 oz. Antiqued Copper Robbins Medal replica has been reviewed by Numismatic Guaranty Corporation (NGC) and determined to be in GEM Uncirculated condition. The medallion is encased in a protective NGC holder accompanied by a First Day of Issue (FDI) certification label, indication that the medal was received by NGC within the first twenty-four hours of its release.

This GEM Uncirculated Antiqued Copper Medal struck in honor of mankind's first steps on the moon will make an exciting addition to your collection!