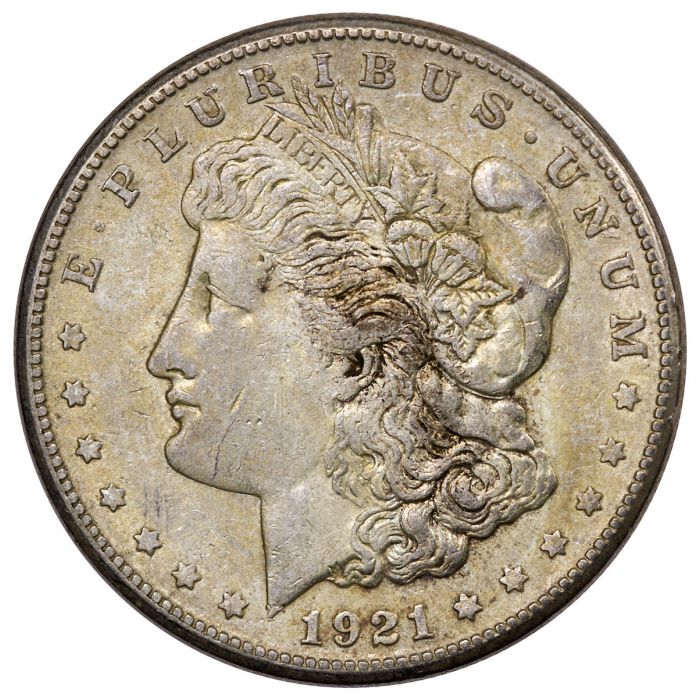 The Morgan Silver Dollar of 1921

The legendary Morgan Silver Dollar rests at the very top of the list when discussing collectible American coins. The mystique and allure of the Morgan Dollar has remained strong over the years, and continues to grow even today due to the coin’s beautiful engravings, large dollar sized format, famous branch mint productions, hoards gathered and released, the images of gambling in old casinos out in the Wild West, and many other fantastic reasons. The design for the Morgan Dollar was a simple, yet elegant, adherence to the rules set forth by Congress on minting coins. The obverse of the coin displays a beautifully bold portrait of Lady Liberty facing left as the central design element, while the reverse of the coin carries the image of a classic American eagle with wings outstretched, clutching a branch and arrows.

George T. Morgan, Assistant Engraver to the United States Mint at the time, is credited with developing the iconic silver dollar, and would even become the very person the coin would derive its name. The Morgan Silver Dollar was minted beginning in 1878 and saw continuous production among most, if not all, of the U.S. Minting facilities until ceasing in 1904. Towards the end of World War I, the United States Government authorized the melting of silver dollars under The Pittman Act to help provide for the war effort, in exchange freshly mined silver was to be purchased and coined to replace some of the dollars taken out of circulation. The readily available and previously used Morgan Dollar die was thus prepared for another year of production while a new coin design was being finalized. The unusual circumstances set the stage for an oddly unique addition to the Morgan Silver Dollar series, the stand alone year of production for 1921.

The Morgan Dollar of 1921 is a highly sought and collected year of production for the Morgan Silver Dollar due to its one year minting and the odd circumstances under which it was produced. The following listing offers the opportunity to acquire this desirable one year type coin in the circulated grade range of Very Good – Extremely Fine (VG-XF) and randomly selected from the Philadelphia, Denver, or San Francisco Mint. What better way to add a large piece of classic American silver to your collection? This is the perfect opportunity to start a Morgan Dollar Collection or to hoard a very popular one year type coin from an important and widely collected American series. Don’t let this one slip away.

Check out the discount pricing for purchasing this item in bulk quantity while available!