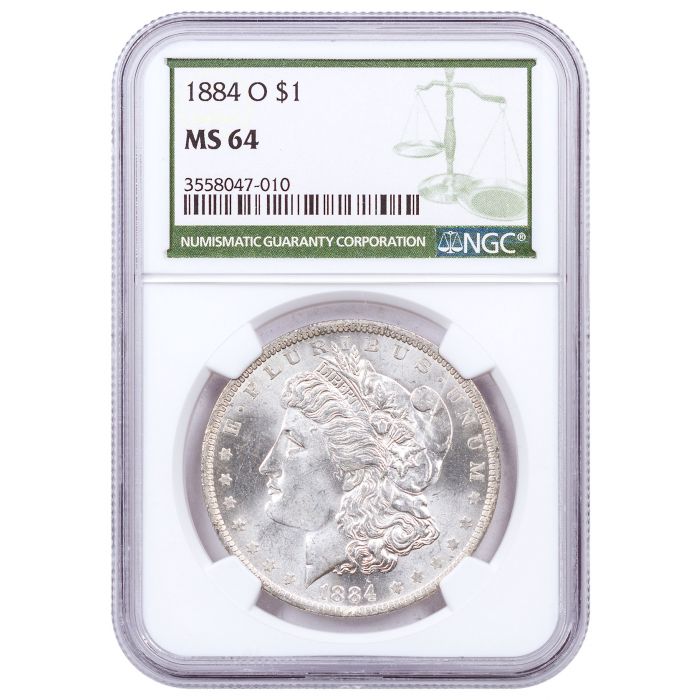 Skip to the beginning of the images gallery
This New Orleans struck highly coveted 1884-O Morgan Silver Dollar is certified by NGC to be in Mint State 64 condition and encapsulated with a Green Label.

No other coin in American history has earned itself a place in the ranks of Americana quite like the Morgan Silver Dollar. First issued in the decade following the Civil War, the coin helped to bring the country together with a new, common identity. This piece comes from the New Orleans Mint, which was situated in the old Confederacy, making it an excellent option for collectors with an interest in and appreciation of American history.

Obverse: The coin's obverse features a left-side profile of Liberty, whom designer George T. Morgan depicted as an American-style figure. She wears a ribbon that bears an inscription of her name, "LIBERTY," a Phrygian cap, and a crown of cotton and wheat. Inscriptions along the rim include the statutory motto "E PLURIBUS UNUM" and the date, "1881."

Reverse: On the reverse, an eagle holds arrows and an olive branch within an open wreath. The national motto "IN GOD WE TRUST," is inscribed above its head. Rim inscriptions read, "UNITED STATES OF AMERICA" and "ONE DOLLAR."

Numismatic Guaranty Corporation (NGC) provided the grading information for this coin on a green label. The grading company awarded this piece a grade of Mint State 64. That means that it has an average or better strike and lacks any traces of wear. The Green Label is only given to coins that were chosen by Rare Coin Company of America (RARCOA) in their search for top quality examples, including eye appeal, strike, luster, and toning, before being submitted to NGC for certification. Only specimens that meet RARCOA's stringent criteria qualify for NGC's Green Label, allowing collectors to quickly recognize better quality coins that have gone through this additional inspection in addition to NGC's certification procedure.

To learn more about the NGC Green Label and to view the entire assortment, click Here!

Add this 1884-O Silver Morgan Dollar to your collection today.